The United States reported at least 75,000 new Covid-19 cases on Thursday, a record daily increase for the seventh time this month, according to a Reuters tally. 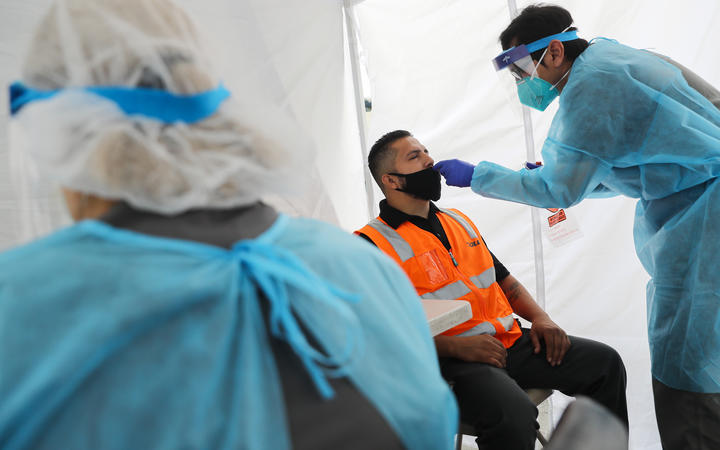 US man Jose Deloera is tested for COVID-19 at a testing site provided by the International Brotherhood of Teamsters on July 16, 2020 in Long Beach, California. Photo: AFP

US deaths are also rising and have recently reached the highest levels since early June, led by Arizona, California, Florida and Texas, according to the tally.

More than half of all states - 30 out of 50 - have reported record one-day increases in cases this month. Infections are rising in almost all states, based on a Reuters analysis of cases the past two weeks compared with the prior two weeks.

If Florida were a country, it would rank fourth in the world for the most new cases in a day behind the United States, Brazil and India, according to a Reuters analysis.

Americans have become increasingly divided on issues such as the reopening of schools and businesses and wearing face masks in public. There is near-universal consensus among health experts that wearing masks is one of the most effective ways to stop transmission of the virus, which has killed more than 134,000 Americans.

Dr. Anthony Fauci, the government's top infectious diseases expert, has warned that cases could soon top 100,000 a day if Americans do not come together to take steps necessary to halt the spread of the virus.

Restrictions on non-essential travel at US land borders with Canada and Mexico will be extended through 21 August, Canada and the United States announced on Thursday.

"Canada and the United States have agreed to extend the current border measures by one month until August 21, and we're going to keep working closely with our American neighbors to keep people safe on both sides of the border," Canadian Prime Minister Justin Trudeau said at a news conference.

Earlier, acting US Homeland Security Secretary Chad Wolf announced the 30-day extension on Twitter that "close collaboration with our neighbors has allowed us to respond to #COVID19 in a North American approach and slow the travel-related spread of the virus."

Reuters reported Monday that Canada and the United States were set to extend a ban imposed to fight the coronavirus outbreak.

The rules, first issued in March, have been repeatedly extended in 30-day blocks.

The restrictions do not cover trade across a US-Canada border that stretches 8891 km or air travel.

Passenger crossings have fallen by 90 percent or more at many border crossings and hit tourist destinations along US borders.

In May, passenger traffic in Detroit fell to 45,000 people crossing, down from 502,000 passengers crossing in February.

At San Ysidro, California, on the US-Mexico border, passenger and pedestrian traffic fell from more than 2.9 million people crossing in February to 1.3 million in May.

The restrictions do not apply to travellers who are getting to work, or people travelling for family care, educational or humanitarian reasons.