The UN Security Council is to meet to discuss the threats posed by a rusting oil tanker off Yemen's Red Sea coast. 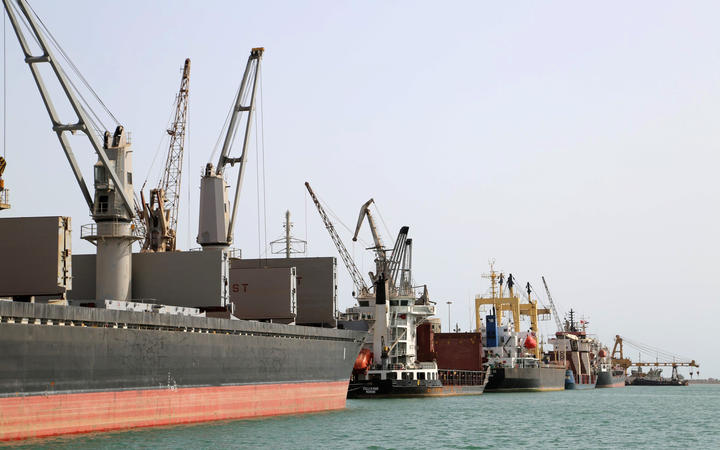 A general view of the Hodeida port in 2019, close to where the stricken oil tanker FSO Safer lies offshore Yemen. Photo: AFP

The FSO Safer is loaded with more than a million barrels of crude oil and experts have warned of an environmental catastrophe if the vessel breaks apart.

The tanker has had virtually no maintenance since the start of Yemen's devastating civil war five years ago.

Houthi rebels agreed on Sunday to let a UN team access the tanker, but there is a dispute over the sale of its oil.

The 45-year-old FSO Safer is anchored about 60km north of the rebel-held port of Hudaydah.

Water recently entered the tanker's engine room, increasing the risk that the vessel would sink or explode. A temporary fix was found, but the UN said it could have led to disaster.

As well as devastating marine life in the Red Sea, an oil spill could destroy the livelihoods of people who depend on the area for fishing.

Last month, it warned: "Yemen would need a long period of time to tackle the fallouts of marine pollution. The Red Sea ecology would need over 30 years to recover from the ensuing dire consequences of the oil spillage."

A spillage could also disrupt one of the world's busiest shipping lanes and affect deliveries of aid supplies to Hudaydah, which is the principal lifeline for just under two-thirds of Yemen's population.

The FSO Safer is an environmental disaster waiting to happen. If nothing is done, 1.14 million barrels of oil could leak into the Red Sea. Houthi Authorities must allow UN inspectors to access the ship and remove the oil. pic.twitter.com/1TKBRk8V7t

At the end of June, UN Security Council member states expressed deep alarm at what they said was "the growing risk that the Safer oil tanker could rupture or explode causing an environmental, economic and humanitarian catastrophe for Yemen and its neighbours".

They called on the Houthis to "immediately grant unconditional access for United Nations technical experts to assess the tanker's condition, conduct any possible urgent repairs, and make recommendations for the safe extraction of the oil".

The UN is said to be discussing the sale of the recovered oil, estimated to be worth $40 million ($61m), and the division of the proceeds between the Houthis and the Yemeni government, which is backed by a Saudi-led coalition of Arab states.

However, the Houthis have insisted that they should be able to sell the oil.

The value of the oil is half of what it was before crude prices crashed, according to Reuters news agency. Although it could be lower, depending on the oil's quality.

Yemen's civil war has reportedly killed more than 100,000 people and triggered what the UN says is the world's worst humanitarian crisis.

Almost 80 percent of the population - more than 24 million people - require some form of aid and protection, while an estimated 2 million children are acutely malnourished.

The country is also now struggling to contain the new coronavirus.

Lise Grande, the UN's humanitarian co-ordinator for Yemen, said on Monday: "Yemen can't take much more. There isn't enough funding, health and water programmes are shutting, famine is stalking the country again, and people all across the country are being hit hard by Covid."