A star has been sent hurtling across the galaxy after undergoing a partial supernova, astronomers say. 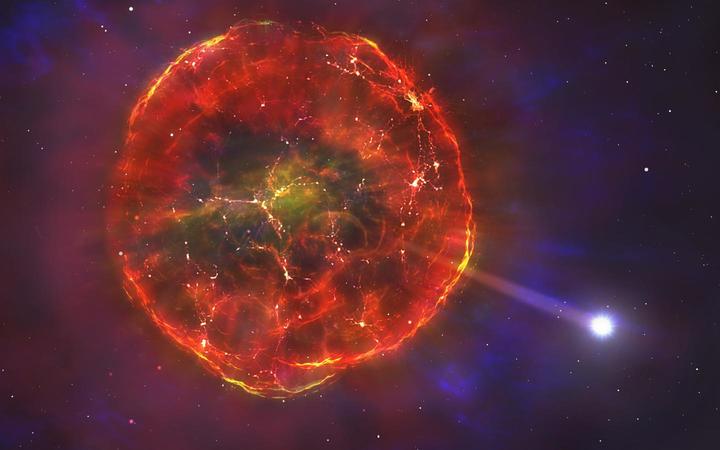 The material ejected by the supernova will initially expand very rapidly, but then gradually slow down, forming an intricate giant bubble of hot glowing gas. Eventually, the charred remains of the white dwarf that exploded will speed out onto its journey across the Galaxy. Photo: University of Warwick/Mark Garlick

A supernova is a powerful explosion that occurs when some stars reach the ends of their lives; in this case, the blast was not sufficient to destroy it.

Astronomers think the object, known as a white dwarf, was originally circling another star, which would have been sent flying in the opposite direction.

When two stars orbit each other like this, they are described as a "binary". Only one of the stars has been detected by astronomers, however.

The object, known as SDSS J1240+6710, was previously found to have an unusual atmospheric composition.

Discovered in 2015, it seemed to contain neither hydrogen nor helium (which are usually found), appearing to be composed instead of an unusual mix of oxygen, neon, magnesium and silicon.

Now, using the Hubble Space Telescope, an international team has also identified carbon, sodium, and aluminium in the star's atmosphere, all of which are produced in the first thermonuclear reactions of a supernova.

But there is also a clear absence of what is known as the "iron group" of elements, iron, nickel, chromium and manganese.

These heavier elements are normally cooked up from the lighter ones, and make up the defining features of thermonuclear supernovas.

The lack of iron group elements in SDSSJ1240+6710 suggests that the star only underwent a partial supernova before the nuclear burning died out.

Lead author Professor Boris Gänsicke, from the department of physics at the University of Warwick, UK, said: "This star is unique because it has all the key features of a white dwarf but it has this very high velocity and unusual abundances that make no sense when combined with its low mass.

"It has a chemical composition which is the fingerprint of nuclear burning, a low mass and a very high velocity; all of these facts imply that it must have come from some kind of close binary system and it must have undergone thermonuclear ignition. It would have been a type of supernova, but of a kind that that we haven't seen before."

The high velocity could be accounted for if both stars in the binary were carried off in opposite directions at their orbital velocities in a kind of slingshot manoeuvre after the explosion.

The scientists were also able to measure the star's mass, which is particularly low for a white dwarf - only 40% the mass of our Sun - which would be consistent with a partial supernova that did not quite destroy the star.

The nature of the nuclear burning that occurs in a supernova is different from the reactions that release energy in nuclear power plants or most nuclear weapons. Most uses of nuclear energy on Earth rely on fission - which breaks down heavier elements into lighter ones - rather than the fusion that occurs in a star.

"The process developing during a thermonuclear supernova is very similar to what we try to achieve on Earth in our future power plants: nuclear fusion of lighter elements into heavier ones, which releases vast amounts of energy," Prof Gänsicke told BBC News.

"In a fusion reactor, we use the lightest element, hydrogen (more specifically, different flavours, or isotopes of it). In a thermonuclear supernova, the density and temperature in the star becomes so high that fusion of heavier elements ignites, starting with carbon and oxygen as 'fuel', and fusing heavier and heavier elements."

SDSSJ1240+6710 may be the survivor of a type of supernova that hasn't yet been observed as it's happening.

Without the radioactive nickel that powers the long-lasting afterglow of the Type Ia supernovas, the explosion that sent the white dwarf careering across our Galaxy would have been a brief flash of light that would have been difficult to discover.

The research has been published in the Monthly Notices of the Royal Astronomical Society.