One of the most recognisable stars in the sky is starting to look very different - and it's got the astronomy world talking. 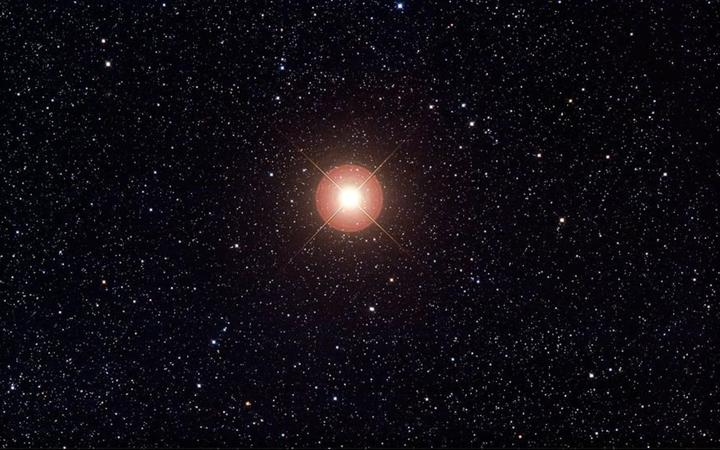 Betelgeuse is a red giant star in the constellation Orion, one of the most familiar constellations in the night sky. Photo: Twitter / AstroPixels.com

The star, named Betelgeuse, has dimmed its brightness so significantly that you can see the difference with the naked eye.

There's been speculation that this dimming means Betelgeuse will turn into a supernova, which has some astronomy fans excited.

But is that really what's happening up there?

Is #betelgeuse about to go supernova? It has suddenly and rapidly decreased in brightness by a factor of 2 - noticeable to the naked eye. pic.twitter.com/VppN3X7tBL

Betelgeuse is a red giant star in the constellation Orion, one of the most familiar constellations in the night sky.

Pronounced "beetlejuice", the star is roughly 10 times bigger than our Sun in mass.

Associate Professor Michael Brown from Monash University's School of Physics and Astronomy said over the past few months Betelgeuse has faded in brightness, which makes the entire constellation look a bit odd.

"Because Orion is such a familiar constellation to astronomers, be they professionals or amateurs, it just looks weird right now with Betelgeuse, which is normally a really bright red star, being noticeably fainter than usual," he said.

"The fact that it's become so faint compared to normal has really got people's attention."

I'm loving all the excitement around if Betelgeuse is about to go Supernova.

It really is a massive star and the explosion would be so friggen cool!

Here's the ALMA 'image' of Betelgeuse overlaid on our System - look how big it is!

Macquarie University Astrophysicist and science communicator Angel Lopez-Sanchez said if Betelgeuse does explode, it will be visible during the day and could take months to fade.

"Social media has again played a role here with the 'hype' of the brightness of Betelgeuse," Dr Lopez-Sanchez says.

"But people have been talking about that and many of them would love to see Betelgeuse explode - I do not."

Is the dimming of Betelgeuse a rare event?

Dr Brown, who is also the outreach coordinator for the Astronomical Society of Australia, said this could be the darkest we'll see Betelgeuse in our lifetime - but that doesn't necessarily make it rare.

"It's unusual for us to see Betelgeuse this faint, but red giant stars are quite variable and Betelgeuse doing this isn't necessarily out of the ordinary over the scale of many thousands of years," he said.

Lopez-Sanchez said it is well-documented that Betelgeuse is a variable star, meaning it changes brightness periodically.

"As it has done plenty of times in the past, Betelgeuse will eventually gain brightness again and all will be back to usual," he explained.

"The dimming of the brightness is the typical behaviour of the star.

"It is periodically changing its brightness and it has had this 'low' brightness in the past. Even Aboriginal Australians knew this star changed brightness."

So will it explode?

Well, yes - but it's highly unlikely any of us will be around to see it.

Many astronomers are confident that Betelgeuse will go supernova at some point, but it's more likely to happen tens of thousands of years from now.

Lopez-Sanchez said it is very unlikely we will see the star explode, with recent research indicating the star still has about 100,000 years of life left in it.

"That is almost nothing in the cosmic scale, but a lot for us," he says.

"If Betelgeuse really explodes as a supernova, this would be a great opportunity for us to study how massive stars explode and get a better understanding of stellar evolution and stellar interiors."

According to Brown, the majority of astronomers agree it is probably just part of a natural cycle.

There's a lot of discussion about the dimming of Betelgeuse on astrotwitter at the moment.

"Odds are, this (dimming) is not the precursor to the supernova explosion - although that doesn't stop us having a look occasionally to make sure it's still there, faint and red rather than this bright explosion," he said.

Even if Betelgeuse did go supernova, we won't see the light show instantly.

The star is roughly 700 light years away, so what we see in the sky now actually occurred several hundred years in the past.

"We see Betelgeuse now as it was about 700 years ago, so it's possible that Betelgeuse went supernova 500 years ago, and we wouldn't know about it for another two centuries," Brown said.

"In astronomer terms and in terms of the age of the universe, yes, Betelgeuse will go supernova 'soon'. In terms of our lifetimes, unfortunately, we're probably going to miss out on seeing Betelgeuse go supernova, which is sort of a pity because it would be quite a show."