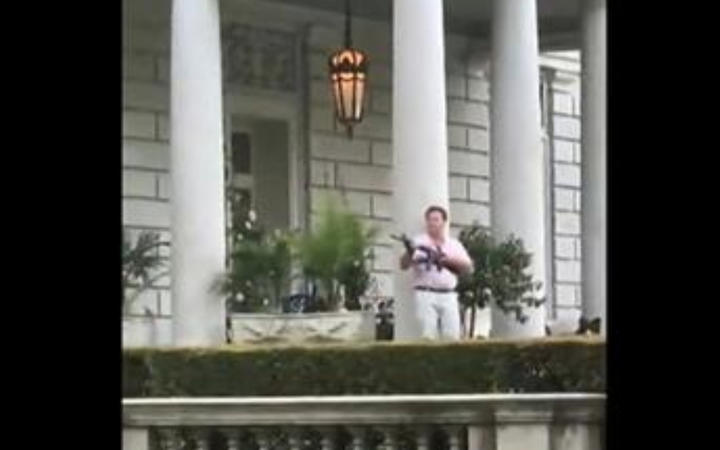 This screen grab taken from a video shows Mark McCloskey, 63, standing outside their home and holding guns including a semi-automatic rifle at Black Lives Matter protesters. Photo: AFP

In the video and others on social media, some protesters can be seen pausing to film or photograph the couple, while others can be heard to shout, "Keep moving!" and "Let's go!"

Mark McCloskey, 63, who lives in the mansion with his wife, Patricia McCloskey, said they feared for their lives and that protesters damaged a wrought-iron gate at an entrance to the wealthy neighbourhood.

Both are personal-injury lawyers.

"This is all private property," he said in an interview with KMOV4 local news. "There are no public sidewalks or public streets. I was terrified that we'd be murdered within seconds, our house would be burned down, our pets would be killed. We were all alone facing an angry mob."

Kimberly Gardner, the city's chief prosecutor, said she was alarmed by the videos and her office was investigating.

"We must protect the right to peacefully protest and any attempt to chill it through intimidation or threat of deadly force will not be tolerated," she said in a statement.

The protesters had been heading to the home of St Louis Mayor Lyda Krewson to demand her resignation after she read out the names and addresses of people calling for police reform in a Facebook Live event last week.

Krewson apologised and took the video down.

The White House said Trump had not heard the slogan.

Trump also blasted Princeton University's weekend announcement it was removing former US president Woodrow Wilson's name from its schools over his racist remarks and policies.