America's top infectious disease expert has told lawmakers that the nation is seeing a "disturbing surge" in coronavirus infections in some states. 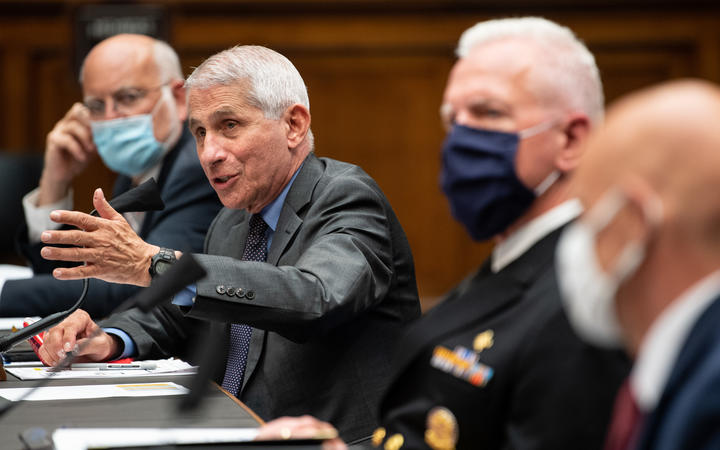 A panel of health officials, including Dr Anthony Fauci, said the next few days will be crucial to stem the new outbreaks.

Cases are climbing rapidly across a number of US states.

The four top experts also testified they were never told by President Donald Trump to "slow down" testing.

Their comments come after Trump told a weekend rally in Oklahoma that he had asked his team to do less testing to help keep official case counts down.

The White House has said his comment was "in jest".

"To my knowledge, none of us have ever been told to slow down on testing," Dr Fauci, the director of the National Institute of Allergy and Infectious Diseases, testified to a congressional committee investigating the US response to the pandemic.

"In fact, we will be doing more testing," he said.

The other three officials - representing the Centers for Disease Control and Prevention (CDC), the Food and Drug Administration (FDA) and the Department of Health and Human Services - also disputing Trump's comment, saying they had never been directed to slow testing.

More than 120,000 Americans have died from the coronavirus - more than any other nation.

What else did experts say?

Dr Fauci warned of "a disturbing surge of infection" and "increased community spread" in many southern and western states.

"The next couple of weeks are going to be critical to address those surges that we're seeing in Texas, Florida, Arizona, and other states."

Dr Redfield also called on all Americans to get a flu jab this year, saying the public must "embrace flu vaccinations with confidence".

"This single act will save lives," he said.

Dr Fauci said he was "cautiously optimistic" a vaccine might be ready by the end of 2020.

He said it was a matter of "when and not if" the vaccine was ready, but added that it "might take some time".

Drug company Moderna has plans "to launch a Phase 3 clinical trial as early as July 2020, pending positive results from this Phase 2 trial", he said.

Dr Fauci also defended his decision not to warn Americans to start wearing masks earlier, saying it was due to a scarcity at the time of personal protective equipment, or PPE, which was needed for healthcare providers.

Several cities and counties have issued new mask requirements in the past week.

"Plan A: Don't go in a crowd. Plan B: If you do, make sure you wear a mask," Dr Fauci told the committee.

Where is the virus surging?

The number of new daily infections is increasing in more than half of all US states.

After setting new daily records, Texas and Florida said they may be forced to announce new lockdown measures, despite currently barrelling ahead with reopening plans.

On Monday, Florida surpassed 100,000 cases. In the absence of a state-wide mask requirement, several cities and towns have issued their own orders mandating masks in public.

Texas has temporarily revoked alcohol licenses from several businesses that were breaking social distancing rules. Texas Governor Greg Abbott said he did not expect to issue new lockdown orders, but "closing down Texas again will always be the last option".

Arizona, which saw a visit from Donald Trump on Tuesday, surpassed its daily record for new infections only hours before the president arrived. Officials there warn that more than 80 percent of hospital beds are currently being used, and that the healthcare system may be overrun in the coming days or weeks.