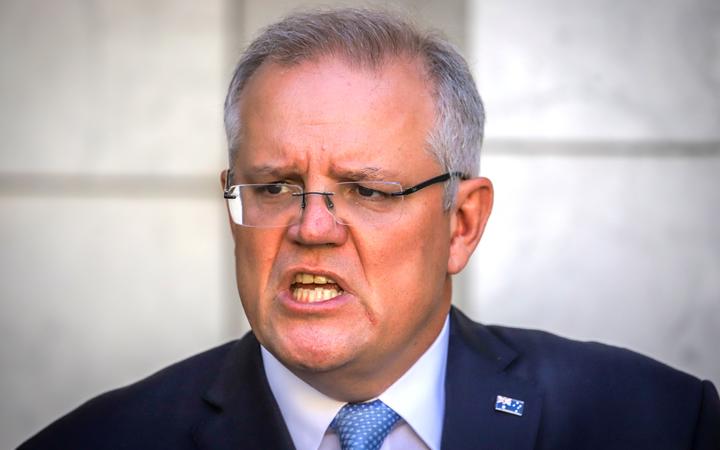 Australia Prime Minister Scott Morrison has not named the country behind the cyber attacks but said they have "very significant capabilities". Photo: AFP

"This activity is targeting Australian organisations across a range of sectors, including all levels of government, industry, political organisations, education, health, essential service providers and operators of other critical infrastructure," he said.

"We know it is a sophisticated state-based cyber actor because of the scale and nature of the targeting and the trade craft used."

Morrison said, so far, it did not appear there had been any "large scale" breaches of people's personal information but described the attacks as "malicious".

"This is why we are raising this matter today, to raise awareness of this important issue," he said.

"To encourage organisations, particularly those in the health, critical infrastructure and essential services to take expert advice and implement technical defences to thwart this malicious cyber activity."

The prime minister has not named the country behind the cyber attack but said they have "very significant capabilities".

When asked whether the country responsible had been identified he said the Federal Government would not be making "any public attribution" about the attacks.

"What I can confirm is there are not a large number of state-based actors that can engage in this type of activity," Morrison said.

According to the Council on Foreign Relations, China, Russia and Iran are the top three states suspected of sponsoring cyber operations.

Morrison said he raised the issue today "not to raise concerns" but to make sure the public was aware of the threat.

"That fact that these threats present is not a surprise in this world in which we now live," he said.

Defence Minister Linda Reynolds said the Australian Cyber Security Centre and Department of Home Affairs had published a detailed technical advisory today, which outlined what organisations could do to "detect and mitigate" the threat.

"I remind all Australians that cyber security is a shared responsibility of us all," she said.