Chicago saw its deadliest day in at least 30 years last month, with 18 killings within a 24-hour period on 31 May. 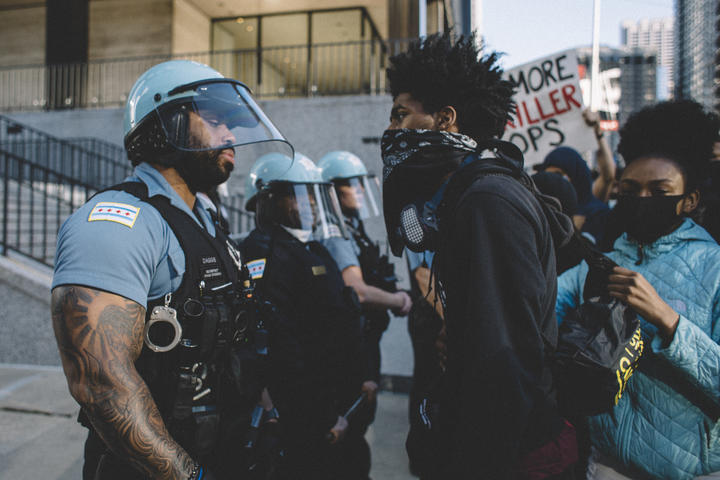 Protesters clash with police in Chicago during a protest over George Floyd's death. Photo: AFP / NurPhoto

The violence occurred as protests over George Floyd's death in Minneapolis also spurred rioting and looting in the Windy City.

Over the last weekend in May - a three day holiday - 85 people were shot and 24 killed, according to the University of Chicago Crime Lab.

Most of the victims were black.

The dead and injured included students, parents and middle-aged workers, according to the data provided to the Chicago Sun-Times.

"We've never seen anything like it, at all," senior research director Max Kapustin told the newspaper, noting that the Crime Lab's data only went back as far as 1961.

"I don't even know how to put it into context," he said. "It's beyond anything that we've ever seen before."

Kapustin added that protests over Floyd's 25 May death in police custody may have distracted Chicago Police Department (CPD) resources from normal patrol duties.

"When CPD has to turn its attention elsewhere and there's suddenly this vacuum that opens up, you also unfortunately see a picture like you saw with [last] weekend where you see an absurd amount of carnage, people getting injured and killed," he said.

The second deadliest day in the city's history was 4 August 1991, when 13 people were killed, according to the data.

Researchers told BBC News that 31 May could be the deadliest day in as many as 60 years, but cautioned that data from before 1991 was less accurate than the digital data that came afterwards.

Police told the Sun-Times: "The level of activity experienced over the last week has been unprecedented and the Department is actively investigating multiple incidents across the city and working to determine the motives in these cases."

It added that it was "actively working to seek justice for all the residents impacted, especially those who have been killed or injured by these senseless acts of violence".

Angelo Bronson, a 36-year-old father of two, was shot in the Englewood neighbourhood while in town from Washington DC to see family.

John Tiggs, a 32-year-old father of three, was on his way to a cell phone store to pay his bill when he was killed, family say.

Chicago's murder rate, though among the highest in US cities, has fallen in recent times. In the 1990s, it was not unusual for the city to see more than 900 murders in a year.