Global cases of the novel coronavirus topped 7 million on Saturday, as case numbers surge in Brazil and India, according to a Reuters tally. 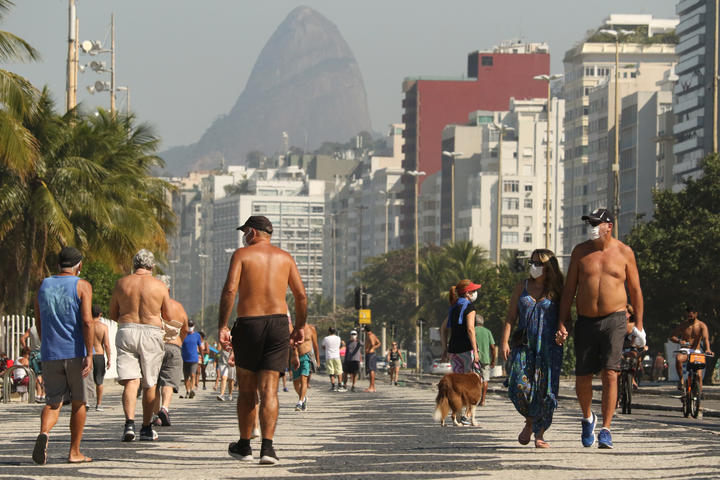 About 30 percent of those cases, or 2 million infections, are in the United States. Latin America has the second-largest outbreak with more than 15 percent of cases.

Globally, deaths from the novel coronavirus are approaching 400,000.

The United States accounts for about one-quarter of all fatalities but deaths in South America are rapidly rising.

The number of deaths linked to Covid-19 in just five months is now equal to the number of people who die annually from malaria, one of the world's most deadly infectious diseases.

Late on Friday, Brazil's Health Ministry took down a website showing the evolution of the epidemic over time and by state and municipality. The ministry also stopped reporting a total tally of confirmed cases, which have shot past 645,000 - more than anywhere outside the United States - and its overall death toll, which just passed Italy with more than 35,000.

"The cumulative data ... does not reflect the moment the country is in," Bolsonaro said on Twitter, citing a note from the ministry. "Other actions are underway to improve the reporting of cases and confirmation of diagnoses."

Neither Bolsonaro nor the ministry gave a reason for taking down the covid.saude.gov.br website, which had been a key public resource for tracking the pandemic. The page still appeared with an "under maintenance" notice at noon on Saturday.

The government also drew fire for pushing back the release of its daily tally of diagnoses and deaths, previously available about 5pm but released in recent days near 10pm.

In Europe, France's coronavirus death toll rose by 31 on Saturday from the previous day to reach 29,142, the French government said in a website update.

The French death toll is the fifth-largest in the world.

In Madrid, residents wearing face masks queued two meters apart to be among the first visitors back in the city's famed galleries on Saturday, as the Prado, Reina Sofia and Thyssen-Bornemisza museums reopened after nearly three months of coronavirus lockdown.

Spain has so far recorded 27,134 deaths and 240,978 cases of the coronavirus. It will further ease the lockdown in Madrid and Barcelona from Monday, when bar and restaurant patrons will be allowed to sit inside rather than just on outdoor terraces.

Lockdown restrictions may be futher eased in Britain, according to reports from newspapers.

The Sunday Times reported that Prime Minister Boris Johnson wanted to relax planning restrictions that stop many pubs, cafes and restaurants from using outside areas, and also to make it legal to hold weddings outside - something currently limited to Jews and Quakers.

Indoor weddings and funerals with up to 10 people attending would also be permitted from early July, while places of worship would be allowed to reopen for private prayer from June 15, as part of plans to be announced in the coming week, the newspaper said.

Britain has suffered Europe's highest reported death toll from Covid-19, with more than 50,000 deaths according to a Reuters tally this week based on official sources.

'It's not over': Covid-19 cases rise in some nations easing lockdowns: WHO

Some countries have seen "upticks" in Covid-19 cases as lockdowns ease, and populations must protect themselves from the coronavirus while authorities continue testing, the World Health Organisation (WHO) said on Friday (local time).

The epicentre of the pandemic is currently in countries of Central, South and North America, particularly the United States, WHO spokeswoman Margaret Harris said.

"On upticks (in cases), yes we have seen in countries around the world - I'm not talking specifically about Europe - when the lockdowns ease, when the social distancing measures ease, people sometimes interpret this as 'OK, it's over'," Harris told a UN briefing in Geneva.

Harris, referring to US demonstrations since the killing of George Floyd 10 days ago, she said that protesters must take precautions. "We have certainly seen a lot of passion this week, we've seen people who have felt the need to be out and to express their feelings," she added. ""We ask them to remember still protect yourself and others."

To avoid infection, the WHO advised people to maintain a distance of at least 1 metre, frequently wash hands and avoid touching their mouth, nose and eyes, Harris said.