Russian prosecutors have ordered checks at "particularly dangerous installations" built on permafrost, after a huge oil spill in the Arctic. 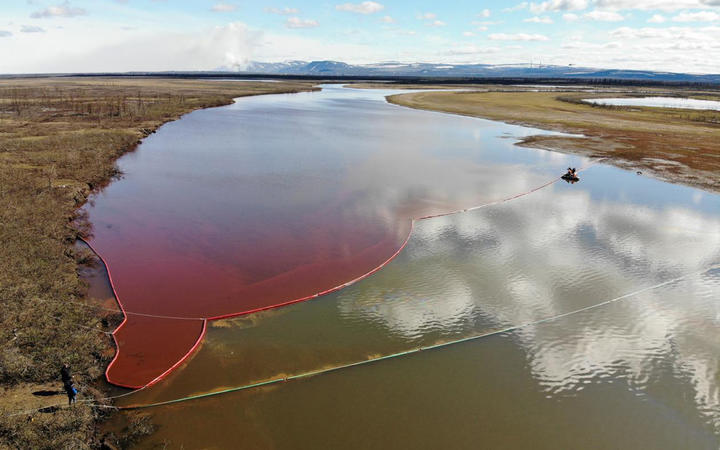 Leaked diesel oil drifted 12km from the site of the accident near the Arctic Circle. Photo: AFP

An emergency was declared after 20,000 tonnes of diesel leaked into a river, when a tank at a power plant near the city of Norilsk collapsed last Friday.

Initial Russian inquiries suggest ground subsidence as the cause.

The plant is owned by a subsidiary of Norilsk Nickel, which is the world's leading nickel and palladium producer.

Delays over reporting the collapse prompted criticism from President Vladimir Putin and the power plant's director, Vyacheslav Starostin, has been taken into custody.

The Russian Investigative Committee has launched a criminal case over pollution and alleged negligence.

Arctic permafrost has been melting in exceptionally warm weather for this time of year.

What checks have been ordered?

The aim is to prevent a repeat of the incident at the plant near Norilsk.

The effectiveness of state monitoring would also be assessed, he said.

The term is used for ground that is frozen continuously for two or more years.

Some 55 per cent of Russia's territory, predominantly Siberia, is permafrost and home to its main oil and gas fields.

A 2017 report to the Arctic Council, an international forum which includes Russia, warned that because of global warming and melting ice, foundations in permafrost regions could no longer support the loads they did as recently as the 1980s.

A recent report by Bloomberg news agency points out that Russia's newer oil infrastructure takes account of the changing climate: storage tanks on the Yamal Peninsula, for instance, are mounted on piles.

How bad was the spill? 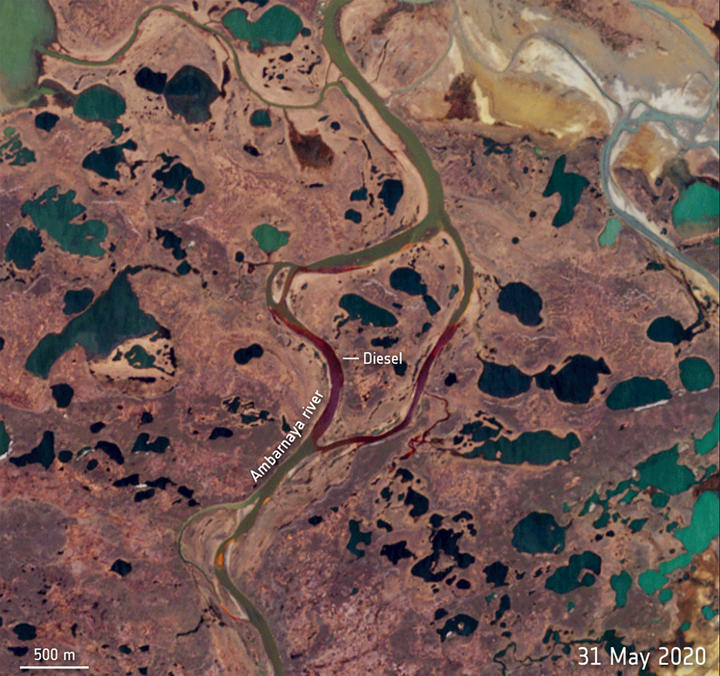 A satellite image of an oil spill into the Ambarnaya river within the Arctic Circle. Photo: AFP or licensors

The leaked oil drifted some 12km from the site, turning long stretches of the Ambarnaya river crimson red.

In a statement, Norilsk Nickel said the incident had been reported in a "timely and proper" way.

The state of emergency means extra forces are going to the area to assist with the clean-up operation.

The accident is believed to be the second largest in modern Russian history in terms of volume, an expert from the World Wildlife Fund, Alexei Knizhnikov, said.

What can be done to clear up the damage?

The incident has prompted stark warnings from environmental groups, who say the scale of the spill and geography of the river mean it will be difficult to clean up.

Greenpeace has compared it to the 1989 Exxon Valdez disaster in Alaska.

Oleg Mitvol, former deputy head of Russia's environmental watchdog Rosprirodnadzor, said there had "never been such an accident in the Arctic zone".

He said the clean-up could cost 100 billion roubles (NZ$2.2bn) and take between five and 10 years.

It is not the first time Norilsk Nickel has been involved in oil spillages.

In 2016, it admitted that an accident at one of its plants was responsible for turning a nearby river red.

Minister of Natural Resources Dmitry Kobylkin warned against trying to burn off such a vast quantity of fuel oil and has proposed trying to dilute the oil with reagents.