President Donald Trump says he is deploying thousands of heavily armed soldiers and law enforcement to stop violence in the US capital. 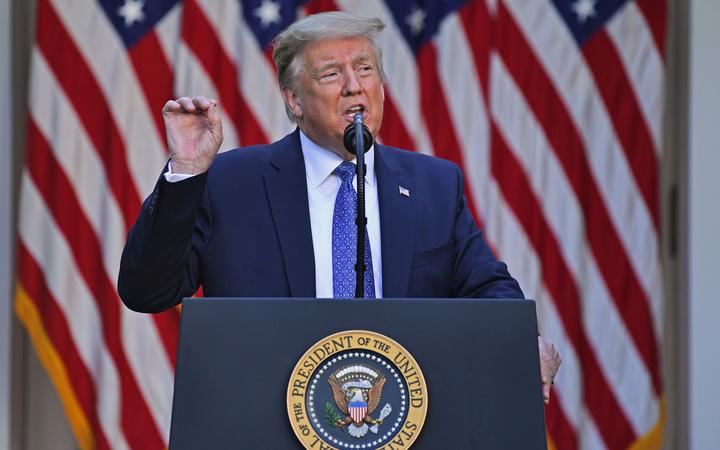 The president also said he would deploy the military to states if governors could regain control themselves Photo: AFP / Getty Images

Trump vowed to do the same in other cities if mayors and governors failed to regain control of the streets.

Violence had erupted in cities across the US on a the sixth night of protests sparked by the death in police custody of African-American George Floyd.

"Mayors and governors must establish an overwhelming law enforcement presence until the violence has been quelled," Trump said in remarks at the White House Rose Garden as authorities dispersed protesters with tear gas just blocks away.

"If a city or state refuses to take the actions that are necessary to defend the life and property of their residents, then I will deploy the United States military and quickly solve the problem for them."

The DC National Guard has already been deployed to the nation's capital, and Mayor Muriel Bowser declared a 7pm curfew.

The president also said he would deploy the military to states if governors cannot regain control themselves.

"We are ending the riots and lawlessness that has spread throughout our county," Trump said. "We will end it now."

Following his brief address in the Rose Garden, Trump walked out of the White House grounds and toward St. John's Church, which was damaged in the protests on Sunday.

The president held a Bible as he stood in front of the boarded up church building in Lafayette Square, just north of the White House.

"We have the greatest country in the world," the president said outside the church.

Protests have erupted since the death of George Floyd in Minneapolis after a police officer pinned him to the ground with a knee on his neck.