A tanker truck has driven through thousands of people marching on a Minneapolis highway to protest the death of George Floyd. 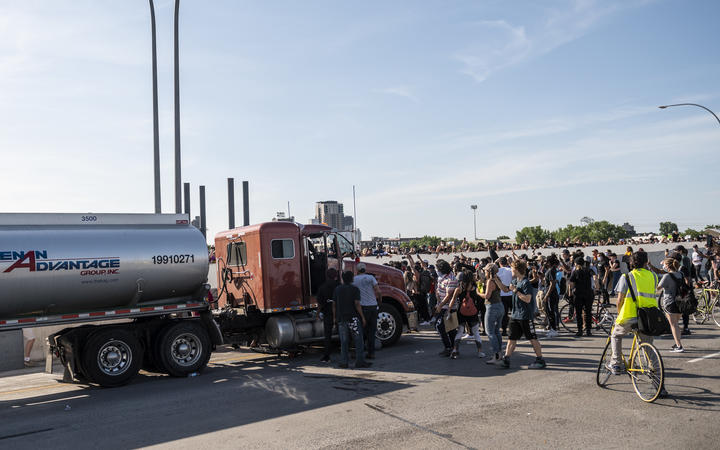 A large group of protesters had been marching over the bridge on both lanes before a truck drove into the crowd. Photo: AFP

Looting broke out on Sunday in Southern California, a tanker truck drove into marchers in Minneapolis and demonstrators clashed with police in Boston and Washington, DC as the United States struggled to contain chaotic protests over race and policing.

National Guard troops were deployed in 15 US states and Washington, DC as darkness fell in major cities still reeling from five nights of violence and destruction that began with peaceful protests over the death of a black man, George Floyd, in police custody.

"I hate to see my city like this but at the end we need justice," said 18-year-old Jahvon Craven as he stood on an overpass watching protesters below on Interstate 35 in downtown Minneapolis moments before an 8pm curfew went into effect in that city.

Floyd, 46, died on Monday after video showed a white Minneapolis police officer kneeling on his neck for nearly nine minutes. It touched off outrage that has swept across a politically and racially divided nation in the midst of a polarizing presidential campaign and recently released from strict stay-at-home orders during the Covid-19 pandemic that threw millions out of work.

Minority communities were hit especially hard by the pandemic and those clamp-downs.

On Sunday afternoon, a tanker truck drove into a throng of demonstrators on I-35 in Minneapolis, which had been closed to traffic. The driver was pulled from the cab and beaten by protesters before being taken into custody by Minneapolis police. It did not appear any protesters were hit by the truck.

Authorities imposed curfews on dozens of cities across America, the most since 1968 in the aftermath of the assassination of Martin Luther King Jr, which also happened during a presidential election campaign and amid the upheaval of anti-war demonstrations.

In Santa Monica, upscale stores were looted along the city's popular Third Street Promenade before police moved in to make arrests. The vandalism followed a largely peaceful march earlier in the beachside city. Further south, in the Los Angeles suburb of Long Beach, a group of young men and women smashed windows of a shopping mall and looted stores before they were dispersed ahead of a 6 pm curfew.

In Washington, DC, protesters set fires near the White House, the smoke mixing with billowing clouds of tear gas as police sought to clear them from the area.

Sporadic violence broke out in Boston following peaceful protests as activists threw bottles at police officers and lit a cruiser on fire. Philadelphia announced a 6pm to 6am curfew after a day of protests and looting.

Several hundred demonstrators marched through downtown Miami chanting: "No justice, no peace," past a detention center where inmates could be seen in the narrow windows waving shirts.

The demonstrations brought out a diversity of people, a point one young black woman noted at a march in Culver City, California on Sunday. "It means a lot to see people other than black people joining the demonstration," said Candace Collins.

The eruptions of violence have not let up despite the arrest on Friday of former Minneapolis police officer, Derek Chauvin, 44. He has since been charged with third-degree murder. Three other officers involved in Floyd's arrest have yet to be charged. 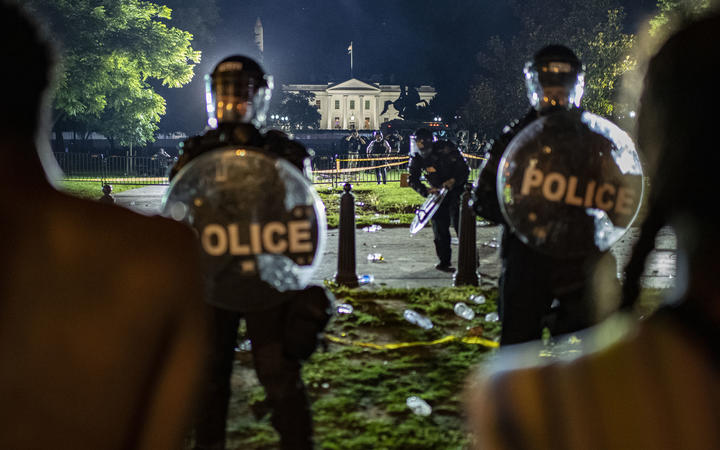 Demonstrators confront secret service police and Park police officers outside of the White House on May 30, 2020 in Washington DC. Photo: AFP or licensors

In New York City, police arrested about 350 people and 30 officers suffered minor injuries during clashes. Mayor Bill de Blasio said police conduct was being investigated, including widely shared videos showing a police vehicle lurching into a crowd of protesters who were pelting it with debris in Brooklyn.

De Blasio said he had not seen a separate video showing an officer pulling down the mask of a black protester to spray something in his face.

Among those arrested for unlawful assembly on Saturday night was de Blasio's 25-year-old daughter, Chiara, according to a New York Police Department source, who said she was issued a "desk appearance ticket" and released.

Protests have also flared in Chicago, Seattle, Salt Lake City, Cleveland and Dallas, where rioters were seen on video beating a store owner who chased them with a large machete or sword. Police said on Sunday he was in stable condition.

Thousands of people gathered peacefully on Sunday afternoon for a rally in St. Paul as state troopers surrounded the state capitol building. About 170 stores in the city have been looted, its mayor told CNN.

While covering the protests in Minneapolis on Saturday night, two members of a Reuters TV crew were hit by rubber bullets and a Reuters photographer's camera was smashed as attacks against journalists covering the unrest intensified.

In response to the protests, Target Corp announced it was temporarily closing 100 stores, about 30 of them in Minnesota.

The administration of President Donald Trump, who has called protesters "thugs," will not federalize and take control of the National Guard for now, national security adviser Robert O'Brien said on Sunday.

Trump said on Sunday the US government would designate anti-fascist group Antifa as a terrorist organization. It was not clear how many of the protesters participating in demonstrations are from Antifa.

"Get tough Democrat Mayors and Governors," Trump said on Twitter on Sunday afternoon. "These people are ANARCHISTS. Call in our National Guard NOW."

National Guard soldiers were deployed in Atlanta, Minneapolis and Los Angeles, as well as Santa Monica.