The Queen has been photographed riding in the grounds of Windsor Castle - her first public appearance since the coronavirus lockdown began. 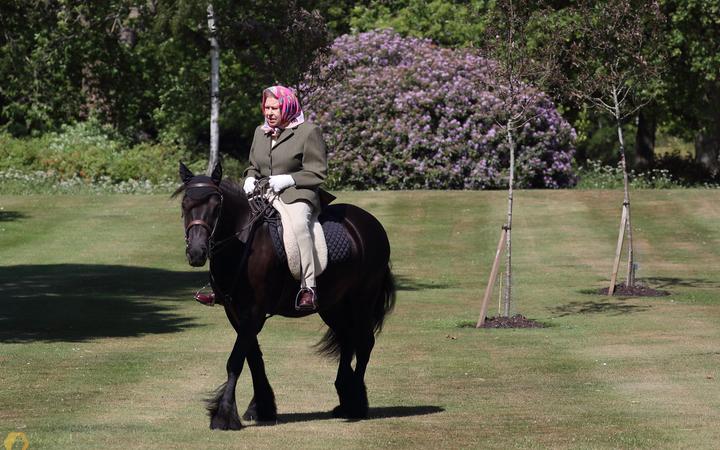 The 94-year-old monarch was pictured on a 14-year-old Fell Pony called Balmoral Fern over the weekend.

She regularly rides in the grounds of Windsor, which is said to be her favourite royal residence.

The Queen has been isolating there with her husband, the Duke of Edinburgh, 98, and a small number of staff.

The last public picture of the Queen was taken as she was driven away from Buckingham Palace to her Berkshire home on 19 March.

One of her two Dorgis - named Candy and Vulcan - could be seen next to her as they both looked out of the car window.

A Dorgi is a cross between a Corgi and a Dachshund.

The Queen carried out official duties the day before her planned departure, but held her weekly face-to-face audience with Prime Minister Boris Johnson on the phone instead.

The monarch is a passionate horse lover and breeder of thoroughbred racehorses.

Wearing a colourful headscarf and smartly dressed in a tweed jacket, jodhpurs, white gloves and boots, the Queen can be seen in the new photographs taken by the Press Association riding during the weekend's sunny weather.

The Queen has made two rare televised addresses to the nation during the lockdown.

In the first, she said the UK "will succeed" in its fight against the virus and thanked people for following government rules to stay at home.

It came less than a week after her son, the Prince of Wales, came out of self-isolation, following his coronavirus diagnosis.

In the second, she gave a poignant address to mark the 75th anniversary of VE Day, praising Britain's response to the coronavirus epidemic that has filled empty streets with "love".

Members of Royal Family have also been sending messages of thanks and support to key workers and the public during the lockdown.

The Queen and senior royals - including the Duke and Duchess of Cambridge - video-called healthcare workers around the world to mark International Nurses Day.

The monarch spent her birthday on 21 April in lockdown with Prince Philip.

A number of annual events that mark the occasion had to be cancelled due to the pandemic - including Trooping the Colour, which celebrates the monarch's official birthday in June.

Members of the Royal Family, including the Duke and Duchess of Sussex, telephoned and video-called the monarch to deliver their birthday wishes.