Protesters have clashed with police in cities across the US over the killing of an unarmed African-American man at the hands of officers in Minneapolis. 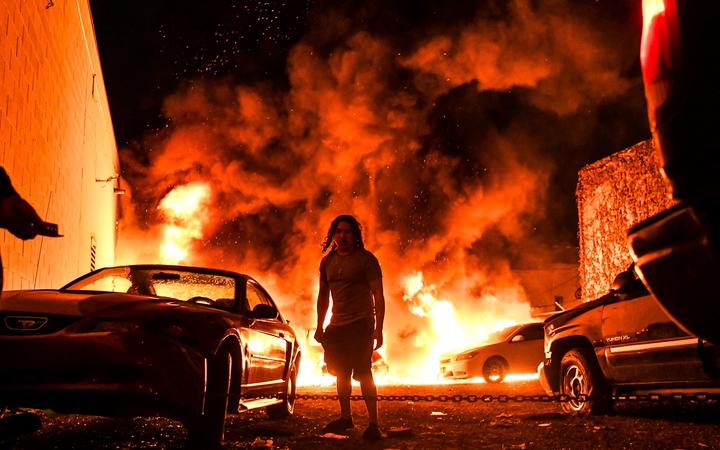 A man tries to tow away a car in a local parking garage in Minneapolis, Minnesota, during a protest over the death of George Floyd. Photo: AFP

CNN's Atlanta news centre came under attack from protesters angry at the killing of George Floyd, while a lockdown at the White House was lifted after about two hours.

Hundreds of people rallied outside the White House, demanding justice over the death of Floyd.

Demonstrations have also been taking place in other centres including Minnesota, New York and California.

A former Minneapolis police officer has been arrested and charged with murder over Floyd's death in custody.

Derek Chauvin, who is white, was shown in footage kneeling on the 46-year-old's neck on Tuesday. He and three other officers have since been sacked.

Chauvin, 44, is due to appear in court in Minneapolis for the first time on Tuesday (NZ time).

President Donald Trump has described the incident as "a terrible, terrible thing" and said he had spoken with Floyd's family, whom he described as "terrific people".

What happened during the protests?

Crowds gathered near the White House in Washington, DC, waving photographs of Floyd and chanting "I can't breathe" - invoking his last words and those of Eric Garner, a black man who died after being held in a police chokehold in New York in 2014.

The White House was then temporarily placed on lockdown, with the US Secret Service closing entrances and exits.

Curfews were ordered for the Twin Cities of Minneapolis-Saint Paul, from 8pm to 6am on both Friday and Saturday evening. But further gatherings of protesters were reported after the curfew had come into effect, and buildings and vehicles were later set alight. 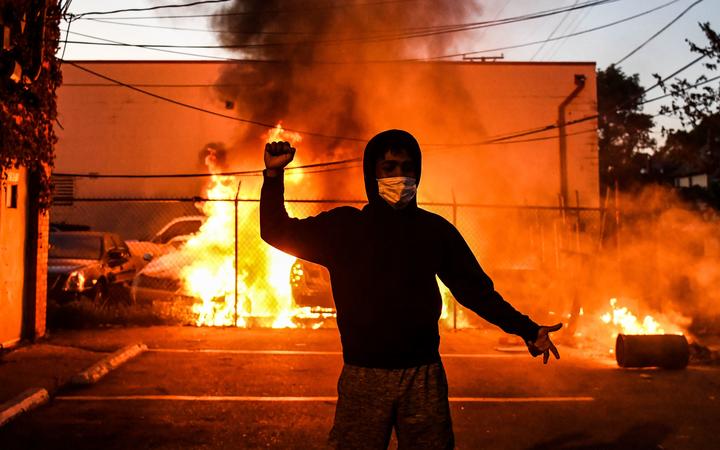 A protester gestures as cars burn behind him during a demonstration in Minneapolis, Minnesota. Photo: AFP

Police, who created a two-block buffer area around their precinct house which was set on fire yesterday, opened fire with tear gas, plastic bullets and concussion grenades, sending the crowd scattering.

There were violent clashes between protesters with police in several other cities, including New York, Los Angeles, Chicago, Denver, Houston, Louisville, Phoenix, Columbus and Memphis.

In Atlanta, buildings were vandalised and a police vehicle was set alight as protesters gathered near the offices of news broadcaster CNN. 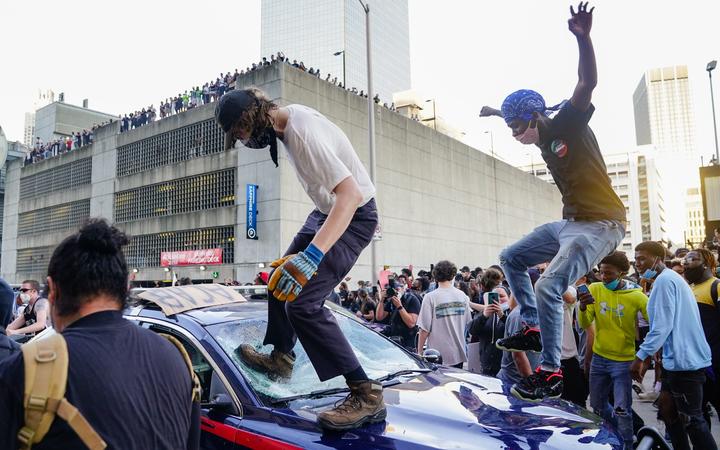 Protesters smash a police car during a protest outside the CNN Centre in Atlanta. Photo: AFP

CNN reporter Nick Valencia said he had been hit by BB pellets aimed at the police and he and his film crew were forced to take cover after there was an explosion on the ground between the protesters and police.

"There are officers that we can report, at least two officers have been injured - one of them he appeared to be seriously injured. He was being dragged out," Valencia told CNN viewers.

"You can see what's left behind of this glass - the glass partition that separates the street. These demonstrators are now launching something. It appears to be some kind of smoke grenade that they're throwing inside CNN Centre right now."

.@CNNValencia and crew take cover after an explosion takes place in the space between protesters and police at the CNN Center in Atlanta. https://t.co/mHZFrcOZj7 pic.twitter.com/HLPzyoKgn9

In Dallas, officers launched tear gas canisters after they were pelted with stones.

While Chauvin has been charged with third-degree murder and second-degree manslaughter over his role in Floyd's death, the protesters want the other officers involved to face justice.

Hennepin County Prosecutor Mike Freeman said he "anticipates charges" for the three other officers but would not offer more details.

Freeman said his office "charged this case as quickly as evidence has been presented to us".

"This is by far the fastest that we've ever charged a police officer," he noted.

The case has reignited US anger over police killings of black Americans, and the nationwide protests follow days of looting and arson in Minneapolis.

How did George Floyd die?

The full report by the county medical examiner has not been released, but the complaint states that the post-mortem examination did not find evidence of "traumatic asphyxia or strangulation".

The medical examiner noted Floyd had underlying heart conditions and the combination of these, "potential intoxicants in his system" and being restrained by the officers "likely contributed to his death".

The report says Chauvin had his knee on Floyd's neck for eight minutes and 46 seconds - almost three minutes of which was after Floyd became non-responsive.

Nearly two minutes before he removed his knee the other officers checked Floyd's right wrist for a pulse and were unable to find one. He was taken to the Hennepin County Medical Centre in an ambulance and pronounced dead around an hour later.

Scores of arrests in New York

Thousands of protesters stormed the perimeter of Barclays Centre in New York.

Police made scores of arrests at the massive demonstration in Brooklyn, loading cuffed protesters onto city buses lined up on Atlantic Avenue, shutting down a major thoroughfare.

A diverse group of protesters cheered to hip hop music and tried to argue about police brutality with police officers in riot gear, who occasionally lunged into crowds to pluck people out for arrest after bottles and other projectiles were thrown.

The demonstrators at the "We can't breathe" vigil and rally in lower Manhattan were pressing for legislation outlawing the police "chokehold" used by a city police officer in the 2014 death of Eric Garner, who was also black.

Hundreds in Detroit joined a "March Against Police Brutality" late in the afternoon outside the Detroit Public Safety Headquarters. Many chanted, "No justice, no peace." Some carried signs that read, "End police brutality" and "I won't stop yelling until everyone can breathe."

In Denver there was a second day of protests as hundreds marched peacefully through its downtown demanding justice for Floyd.

Denver police fired tear gas and rubber bullets to disperse crowds after parked cars were vandalised. There were 13 arrests related to the protests. 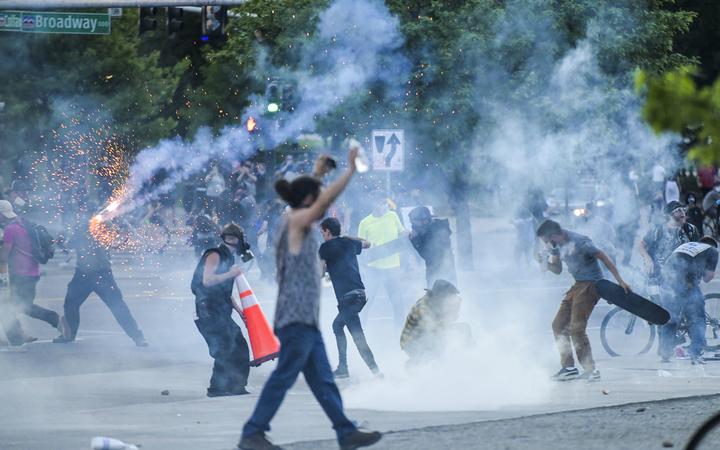 Tear gas is fired during a protest in Denver. Photo: AFP

There have also been demonstrations elsewhere, including Los Angeles, Chicago, Houston, Louisville, Phoenix, Columbus and Memphis.

Frustration was already simmering over the recent deaths of two other black Americans, Ahmaud Arbery in Georgia and Breonna Taylor. 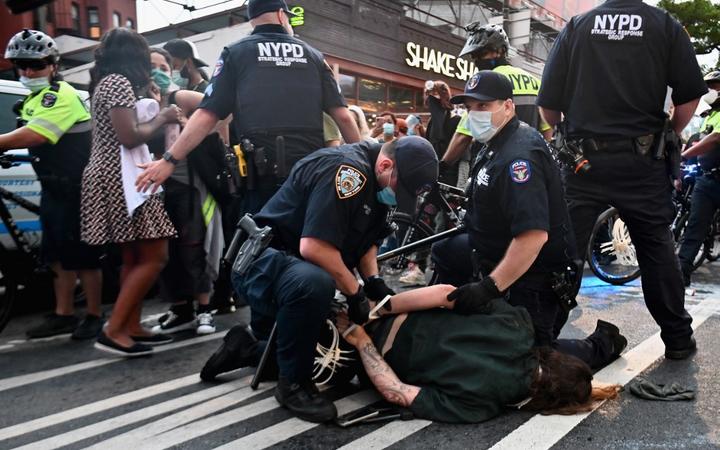 Former US president Barack Obama weighed in, saying: "This shouldn't be 'normal' in 2020 America."

His statement added: "If we want our children to grow up in a nation that lives up to its highest ideals, we can and must be better."