A police officer fired following the death of an unarmed black man in Minneapolis has been arrested and charged with murder and manslaughter. 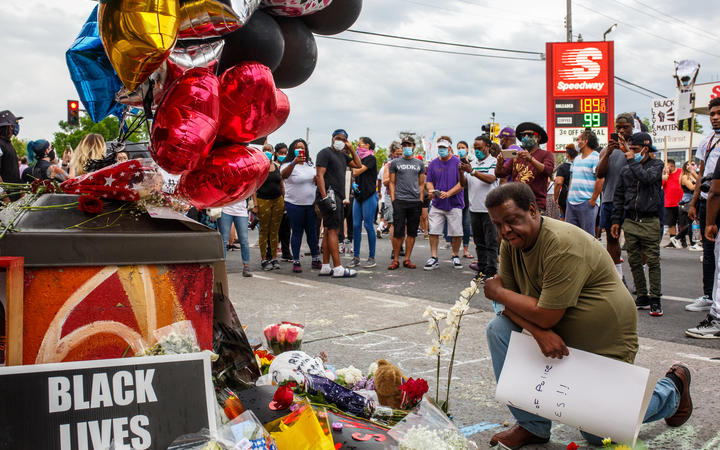 A man prays in front of a makeshift memorial in honor of George Floyd. Photo: AFP

Derek Chauvin was shown in footage kneeling on George Floyd's neck. Three other officers were sacked over the fatality on Monday.

Days of looting and arson in the Minnesota city have boiled over into nationwide protests.

The case has reignited US anger over police killings of black Americans.

Hennepin County Prosecutor Mike Freeman said Chauvin was charged with third degree murder and noted that the investigation of the other officers is ongoing.

He said he "anticipates charges" for the three other officers but would not offer more details.

Freeman said his office "charged this case as quickly as evidence has been presented to us".

"This is by far the fastest that we've ever charged a police officer," he noted.

Shortly after the charges were announced, US Attorney General William Barr said that the justice department and FBI are conducting "an independent investigation to determine whether any federal civil rights laws were violated".

Barr called the video of Floyd's arrest "harrowing to watch and deeply disturbing".

On Thursday (Friday NZT), during the third night of protests over Floyd's death, a police station was set alight. A number of buildings have been burned, looted and vandalised in recent days, prompting the activation of the state's National Guard troops.

There have also been demonstrations in other US cities, including New York, Los Angeles, Chicago, Denver, Phoenix and Memphis.

"It can't be 'normal'," added his statement. "If we want our children to grow up in a nation that lives up to its highest ideals, we can and must be better."

What happened to George Floyd

Officers responding to reports of the use of counterfeit money approached Floyd in his vehicle on Monday.

According to police, he was told to step away from the car, physically resisted officers, and was handcuffed.

Video of the incident does not show how the confrontation started, but a white officer can be seen with his knee on Floyd's neck, pinning him down.

Floyd can be heard saying "please, I can't breathe" and "don't kill me".