North and South Korea have exchanged gunfire in the Demilitarised Zone which divides the two countries. 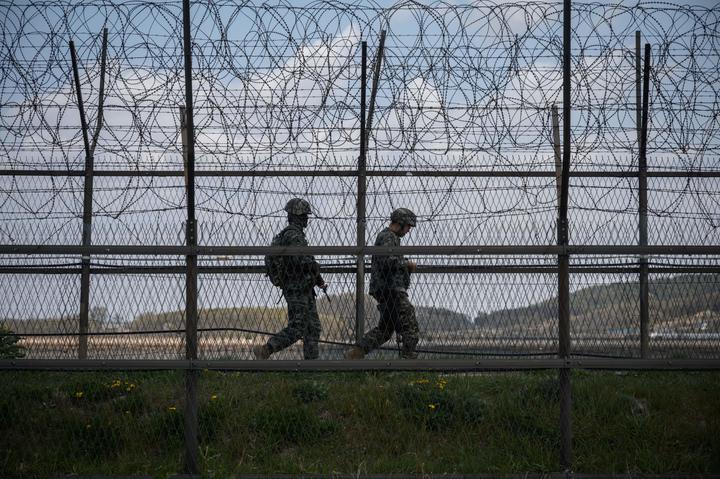 It is not clear what provoked the initial gunfire. Photo: AFP

No casualties were reported on the South Korean side.

In response, South Korea fired "two rounds of gunfire and a warning announcement according to our manual", the military statement said.

It added that officials were trying to contact North Korea.

It is not clear what provoked the initial gunshots.

This is the first time in five years that North Korean troops have directly fired on the South.

The demilitarised zone (DMZ) was set up after the Korean War in 1953 in order to create a buffer zone between the two countries.

For the past two years, the government in Seoul has tried to turn the heavily fortified border into a peace zone.

The news agency cited a senior government official for its report.

The South Korean official declined to provide reasons for believing that Kim did not undergo surgery, but said speculative reports that he may have had surgery, citing some differences in his leg movements, is not true, Yonhap reported.

This increase in tensions comes a day after Kim Jong-un appeared in public.

Choi Kang, vice president of the Asian Institute for Policy Studies, said the timing of the 'grey area' provocation shows Kim is still in charge of the North Korean military.

"Yesterday, Kim was trying to show he is perfectly healthy, and today, Kim is trying to mute all kinds of speculation that he may not have full control over the military," Choi said.

"Rather than going all the way by firing missiles and supervising a missile launch, Kim could be reminding us, 'yes I'm healthy and I'm still in power'."

"The Kim regime may be looking to raise morale of its frontline troops and to regain any negotiating leverage lost during the rumour-filled weeks of the leader's absence," Easley said.

"South Korea and the United States should not take lightly such North Korean violations of existing military agreements."