North Korea has fired two projectiles into the sea, according to South Korea's military. 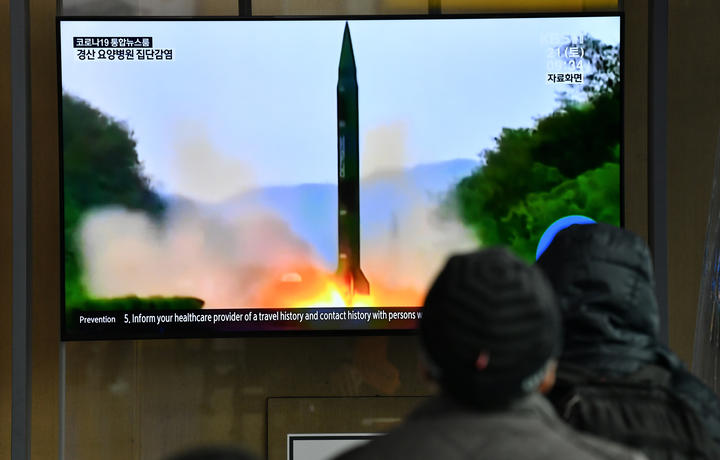 People watch a television news broadcast showing a file image of a North Korean missile test, at a railway station in Seoul on 21 March 2020. Photo: AFP

It said the projectiles appeared to be short-range ballistic missiles.

They were launched early on Saturday from Pyongan province towards the East Sea, also known as the Sea of Japan.

North Korea launched multiple missiles as part of firing drills earlier this month. The US and China have called on Pyongyang to return to talks on ending its nuclear and missile programmes.

On Saturday, South Korea's Joint Chief of Staff said it was monitoring the situation in case there are additional launches.

It described the actions as "extremely inappropriate" at a time when the world was dealing with the Covid-19 pandemic.

The projectiles flew for 410km with a maximum altitude of around 50km, the South Korean military said.

Japan's coast guard confirmed a missile had landed outside the waters of its exclusive economic zone.

It comes as North Korea announced it would be holding a session of the Supreme People's Assembly, the country's parliament, on 10 April. Analysts say the meeting will involve almost 700 of the country's leaders in one spot.

Rachel Minyoung Lee, from North Korea monitoring website NK News said on Twitter that the meeting would "be the ultimate show of (North Korea's) confidence in managing the coronavirus situation".

There have been no reported cases of coronavirus in North Korea, though some experts have cast doubt on this.

North Korea borders China, where the virus emerged, and South Korea, where there has been a major outbreak.

A top US military official said last week he was "fairly certain" there were infections in North Korea.

North Korea quarantined around 380 foreigners - mostly diplomats and staff in Pyongyang - in their compounds for at least 30 days. The restrictions were lifted at the beginning of March. Around 80 foreigners, mainly diplomats, were flown out of the capital on 9 March.