Texas has become the latest US state hit by a protest largely from supporters of President Donald Trump anxious to get back to work, while the governor of New York said his coronavirus-battered state may finally be past the worst of the health crisis there. 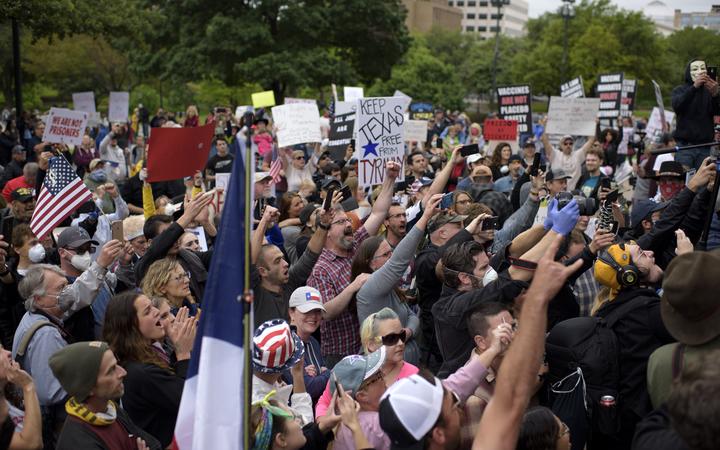 New York, epicentre of the US epidemic, yesterday reported another 540 coronavirus-related deaths for the previous day, the lowest daily tally since 1 April. While that was down from 630 a day earlier, it still represented hundreds more families who lost a loved one to Covid-19, the highly contagious illness caused by the virus, in a single day in one state.

The number of patients requiring intensive care and ventilators to help them breathe as the virus attacks their lungs was also down in New York.

"If you look at the past three days, you could argue that we are past the plateau and we're starting to descend, which would be very good news," New York Governor Andrew Cuomo said during his daily coronavirus briefing.

Still, some 2000 people were being hospitalised with Covid-19 every day, Cuomo said, and 36 of the latest New York deaths occurred at nursing homes, which have been ravaged by the pandemic nationwide.

In neighbouring New Jersey, some 40 percent of coronavirus deaths "are related in some way to long-term care" facilities, the state's health commissioner said.

New Jersey reported another 231 coronavirus-related deaths in the past 24 hours, taking the total there past 4000.

The state's governor, Phil Murphy, said he had a "concerning" call with Senate minority leader and fellow Democrat Chuck Schumer, who told him there was no momentum right now in Congress to put "significant amounts or any amount" of funding into direct aid to states whose economies have been strangled by the pandemic.

Saturday ended another week in which millions of Americans went without pay cheques. More than 20 million have filed for unemployment benefits in the past few weeks alone as closures of businesses and schools and severe travel restrictions to try to curb the virus's spread have hammered the US economy. 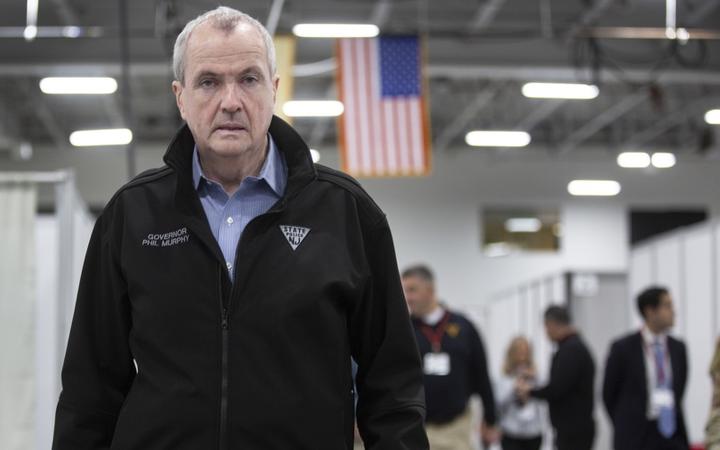 In some welcome news, Walmart said on Saturday it would hire 50,000 more workers to meet a surge in demand for groceries and other essentials from consumers kept indoors during the outbreak.

Even with huge companies such as Walmart and Amazon hiring, some Americans who live in parts of states with lower infection rates have been made restless by restrictions that have more than 90 percent of the country under stay-at-home orders.

Protesters, many wearing Trump hats and shirts but not protective face masks, gathered in the Texas capitol Austin on Saturday chanting "USA! USA!" and "Let us work!"

Texas Governor Greg Abbott, a Republican, on Friday extended school closures in his state through to the end of the academic year. 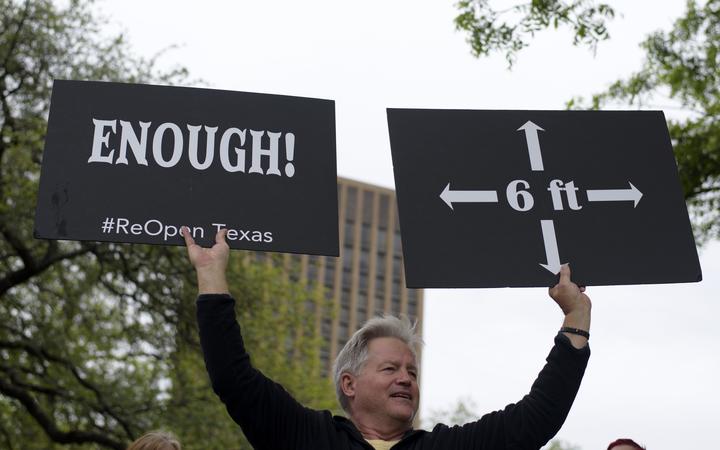 One of the protesters in Texas makes his opinion clear. Photo: AFP

Earlier this week, similar protests erupted in the capitols of Minnesota, Michigan and Virginia.

The demonstrations, which also featured large crowds of people neither practising social distancing nor wearing face coverings, angered governors who have been trying to bring coronavirus outbreaks under control.

Also angering those governors, all Democrats, were a series of Twitter posts on Friday by the Republican president - "LIBERATE MICHIGAN!" "LIBERATE MINNESOTA!" and "LIBERATE VIRGINIA!" - that appeared to be egging on the protests.

While Trump agitates to get the country back up and running sooner rather than later as he faces re-election in November, the Pentagon announced it was extending travel restrictions for its personnel until the end of June.

Several states, including Ohio, Michigan, Texas and Florida, have said they aim to reopen parts of their economies, perhaps by 1 May or even sooner.

But health experts have cautioned that to avoid a second wave of infections as people return to work, extensive testing must be available to track infections, as well as contact tracing and antibody testing to learn who had been previously infected and might have some immunity.

Vice President Mike Pence said on Saturday the United States had the capacity to do a sufficient amount of testing for states to move into a phase one of reopening.

However, governors and state health officials say there is nowhere near enough test kits and equipment available to do that kind of widespread testing.

Cuomo reiterated that federal funding was necessary for the magnitude of testing needed to reopen the economy.

To help slow the virus's spread, New York mandated statewide wearing of masks for anyone out in public and unable to practise social distancing. The rules, which cover all those using public transport or for-hire vehicles, came into effect on Friday night.

Other parts of the country have yet to see a peak in infections and deaths. The handful of states that did not issue stay-at-home orders have all seen significant surges in new cases.

The United States has by far the world's largest number of confirmed coronavirus cases, with more than 706,000 and some 36,000 deaths. New York state accounts for nearly half those deaths.

"This is a terrible experience," Cuomo said. "It's disorienting, it threatens you to your core."