A crew of three has returned from the International Space Station (ISS) to a very different planet they left last year. 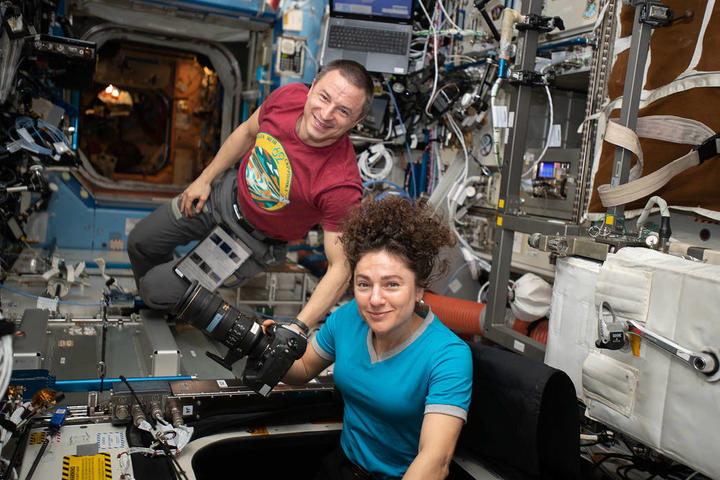 No strangers to isolation, Russian Oleg Skrypochka and American Jessica Meir left Earth in September 2019, well before Covid-19 emerged. The final astronaut from the trio, Andrew Morgan from the US, has been on the ISS even longer, since July 2019.

The coronavirus pandemic has changed the usual routine for returning space crews.

"It's quite surreal to see it unfolding on Earth below," Ms Meir told reporters during a recent video call. "From here, Earth looks just as stunning as usual, so it's hard to believe all of the changes that have taken place since we left."

The trio touched down on Earth on 17 April. Skrypochka and Meir had spent 205 days in space, and Morgan 272 days. 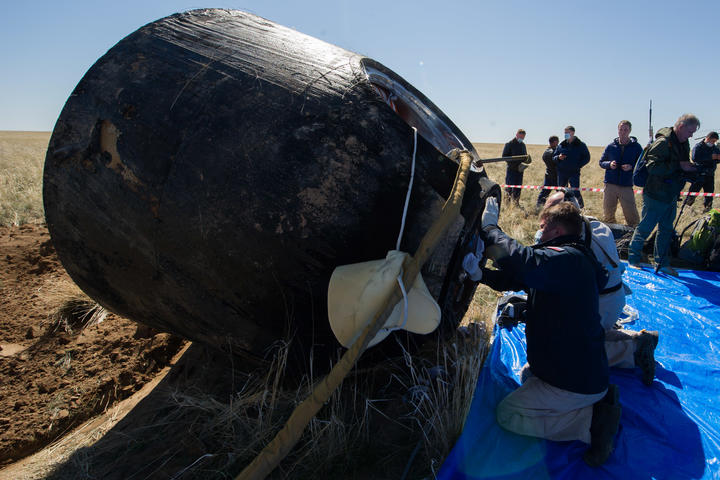 A search and rescue team at the landing site of the Soyuz MS-15 capsule, in a remote area of Kazakhstan. Photo: AFP/ Russian Space Agency ROSCOSMOS/ GCTC/ Andrey Shelepin

A series of posts on the official ISS Twitter account described how the crew's Soyuz ship split into three modules before the descent module reached the Earth's atmosphere "creating a plasma trail" early on Friday.

The capsule then landed successfully in Kazakhstan. US space agency Nasa posted a video of the astronauts being met by a mask-wearing rescue team.

The search party has been in strict quarantine and are believed to have undergone tests for coronavirus immediately before going out to pick up the arrivals to ensure that they were not at risk of infecting them.

In normal circumstances the search team would pick up the crew and bring them to the closest airport, from where they would fly home. But Kazakhstan has declared a state of emergency and most of the airports are closed.

The Baikonur space launch pad, leased by Russia from Kazakhstan, is still operating and the three crew members will be flown there. The Russian will take a plane home, and the Americans will be driven three hours south-east to Kyzylorda, from where a Nasa plane will fly them back to the US.

Quite a ride home from @Space_Station today - my profound gratitude to all those that shaped #TheJourney. Thank you! We’ve returned to a different planet, but it remains a spectacular one. pic.twitter.com/3aoRmlXYkq

A replacement crew of two Russians and an American who flew to the ISS on 9 April also took the utmost precautions to avoid taking the infection into space, spending a month and a half in quarantine before the launch.

Usually, a team of returning astronauts and cosmonauts will undergo a special rehabilitation program lasting several weeks. After a long stay in zero gravity, the body needs time to get used to life in constant gravity. 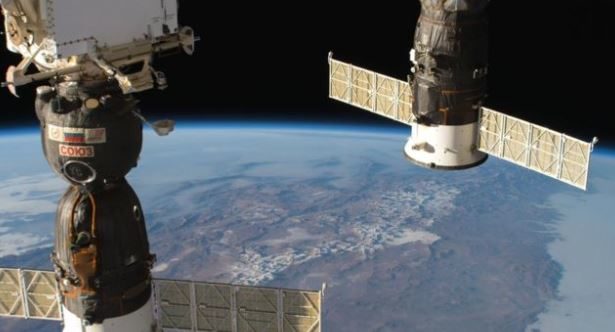 The Russian Soyuz spacecarft (L) shown during a 2018 trip to the ISS. Photo: NASA

But this time doctors have the additional task of protecting the crew from coronavirus.

"It will be difficult to not give hugs to family and friends after being up here for seven months," Meir said on the video call before returning to Earth. Last year she made history after completing the first ever all-female spacewalk with another Nasa astronaut, Christina Koch.

"I think I will feel more isolated on Earth than here. We're busy with amazing pursuits and tasks and don't feel the isolation," she added.

The ISS has been orbiting the Earth since 1998. Five partners are involved - the US, Russia, Japan, Canada and the European Space Agency.