Coronavirus has killed more people in Italy than in any other country, after deaths there rose by 427 in a day. 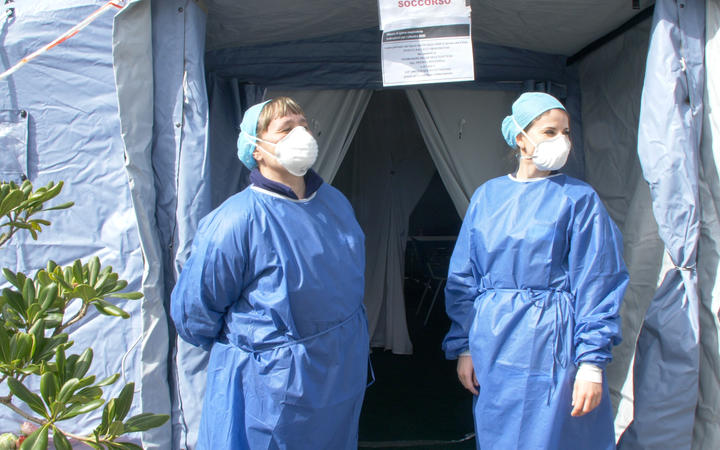 Acceptance First Aid, indicates a panel at the entrance of the hospital in Imola where coronavirus patients are treated. Photo: Andrea Neri / NurPhoto / AFP

The number of deaths now stands at 3,405, which is more than in China where the virus originated last year.

A lockdown imposed on 12 March in Italy has been extended beyond the original 25 March end date. Nearly all Italians have been told to stay at home.

Despite these measures, the number of new cases and deaths has continued to spiral.

China confirmed it had no new domestic cases on Wednesday for the first time since the outbreak began, a major milestone.

But it reported 34 new cases among people who had recently returned to China. The number of cases in the country - more than 81,000 - is still far higher than in Italy, which has 41,035.

What's the latest in Italy?

Italy shut down most businesses and banned public gatherings nationwide on 12 March as it tried to halt the spread of the virus.

Bars, restaurants and most shops have closed, as have schools and universities.

The lockdown has been extended, and Prime Minister Giuseppe Conte said it had helped prevent "the collapse of the system".

But he told the Corriere della Sera newspaper that "we will not be able to return immediately to life as it was before" even when the measures were ended.

A report by the Istituto Superiore di Sanita into the deaths in Italy of 2,003 people confirmed to be positive for coronavirus found that three regions, all in the north, were by far the worst hit.

Some studies point to the large number of elderly in the affected regions, and that a large proportion of 18-34s live at home with them. Different demographics in other nations may have helped to keep the death toll lower.

What about the rest of Europe?

The European Central Bank (ECB) has launched an emergency €750bn (NZ$1.4 bn) package to ease the impact of the pandemic, with boss Christine Lagarde tweeting "there are no limits" to its commitment to the euro.

France began its lockdown on Tuesday morning. It requires citizens who are in public places to carry official paperwork stating why they are not at home or face a fine.

Interior Minister Christophe Castaner told Europe 1 radio on Thursday that the lockdown might be extended beyond the originally stated 15 days.

"Some people think they're some kind of modern-day hero when they break the rules - but they're imbeciles, and a danger to themselves," Castaner said.

Spain is the world's fourth-worst affected country and is under nationwide lockdown.

Germany has not imposed stringent measures, although it has closed schools and many businesses and public spaces. But a speech by Chancellor Angela Merkel on Wednesday appeared to be a final warning to avoid mandatory lockdowns.

"The situation is serious. Take it seriously," she said.

The UK has also not imposed stringent lockdown measures as yet but has announced schools will close. Prime Minister Boris Johnson said he could not give any date for when they might reopen.

London is the worst-affected area in the UK and has now begun to slim down transport services.

But the prime minister's spokesperson said the government had no plans to bring in blanket travel restrictions for London or shut down the city's transport system.

"There is zero prospect of any restriction being placed on travelling in or out of London," he told reporters.