By Jonathan Milne for the Cook Islands News

Cook Islander John Dunn has been returning home for the past 15 years to help Rarotonga Hospital with much-needed surgery. But, he said, even the groundbreaking surgical procedure he was piloting was not enough to address the country's obesity epidemic. That requires culture change. 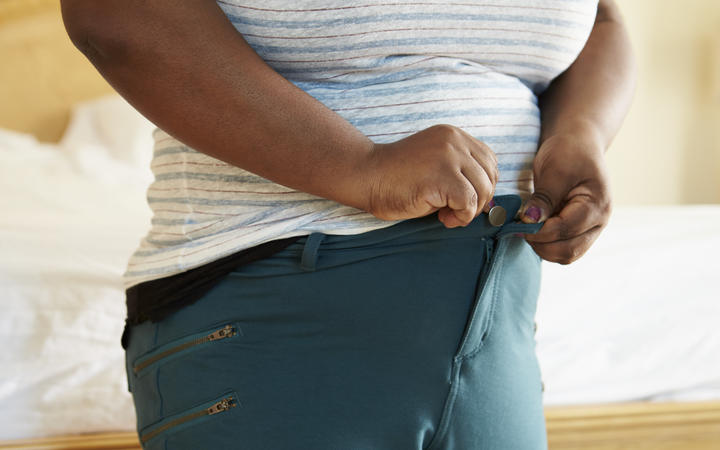 Cultural change is needed to turn around the obesity epidemic in the Cook Islands, surgeon John Dunn says. Photo: 123rf

That is not a fact we would usually use to introduce someone. But this time, it is relevant.

Dunn loves food. He and his wife have traveled the world, eating. His passport, with a stamp designating him a Cook Islander, has taken him to 70 countries. Bhutan, North Korea, Antarctica. And wherever he goes, he eats.

He loves dining in France; he and his wife Rose are wine connoisseurs, members of the exclusive Confrérie des Chevaliers du Tastevin. And he loves dining with locals in Italy, where the conversation is all about the food.

"When we travel we'll go to a food market, not a cathedral," he says.

Yet when I meet this 60-year-old surgeon at 7.30am at Rarotonga Hospital, before he does his rounds, he has not had breakfast. He very rarely does; just a herbal tea. For lunch, he may perhaps have a small bowl of vegetable soup, leaving his only meal of the day for dinner-time.

That's because three things have come together in his life: the uncomfortable reality of middle-age spread, his line of work stitching up the stomachs of obese people, and the realisation that his own people in the Cook Islands are dying young because of kaikai culture.

This is the third most overweight country in the world. And that's why John Dunn is talking to me this morning about such private details as how much he weighs. Because he believes Cook Islanders urgently need to talk about living healthier.

"It's been said this is the first generation in history where our children will live shorter lives than us. That's because of too much food."

Walking through the hospital waiting room and past the big Toyota and Chevrolet ambulances in the emergency bay, staff and patients approach Dunn for updates.

One man, wearing a hospital gown, is taking a morning walk on the palm-fringed lawn high above the Pacific Ocean. He talks to me about how his loved ones might benefit from Dunn's groundbreaking weight management surgery.

Dunn and I put on surgical scrubs and caps and rubber sandals. As he gets changed, I can see the intricate traditional tattoos covering his legs and buttocks; a painful rediscovery of the Pasika culture of his forebears. The tattooist was nervous because of Dunn's age; the two-week process in his own home was agonising. It's a long way from traditional chisel tattooing to the cutting edge of 21st century surgery.

He shows me the sterile, harshly-lit operating theatre where he and Texan surgeon Erik Wilson have, for the past two weeks, been working on an important pilot project performing endoscopic sleeve gastroplasty operations on 11 Cook Islanders.

Dunn is the surgeon who first introduced innovative laparoscopic surgery to New Zealand in 1991. He has done more than 10,000 of the keyhole procedures, removing gall bladders, fixing hernias. His research is published in the New Zealand Medical Journal and the British Journal of Surgery.

Erik Wilson pioneered endoscopic sleeve gastroplasty in 2012; he and Dunn have been performing it in Auckland for the past three years, and now in Rarotonga. The 11 operations here require expensive disposable equipment valued at $60,000, donated half by Dunn's family trust and half by manufacturers Apollo Endosurgery.

The pilot project focuses on those designated seriously or morbidly obese (their patients range from 95kg to 130kg) but not super obese. If these 11 patients keep the weight off, it will show this new surgery can help people before they become seriously ill.

First, the 11 of them sat down together in an upstairs lecture room at the nursing school, and Dunn gave them the same uncompromising talk he's giving me. Obesity will shorten your life by 10 years. Obesity contributes to 13 different kinds of cancer.

"Because I am a Cook Islander through my great-grandmother, that means something to people," he says. "I'm not just another papa'a expert coming in and telling them how to live."

The surgery involves putting the patient under general anaesthetic, before feeding a long tube down their throat. At the end is a light, a camera, and a little sewing machine with which Dunn and Wilson can stitch the front of the patient's stomach to the back.

They are discharged from hospital two days later. A week later, they are back doing all their normal activities - except over-eating. They feel less hungry - this is their chance to eat less and to lose weight.

"I explained to them that I want to see if this pilot works. If it does, I'll do more. If it doesn't, I won't. So there's quite a lot of pressure on their shoulders - and I make no apology for that."

But Dunn doesn't pretend that surgery is the answer to the bigger problem. And that's why he phoned me and invited me up to talk. The solution to killer obesity isn't found in the hospital operating theatre; it's found through talking to each other in our communities. 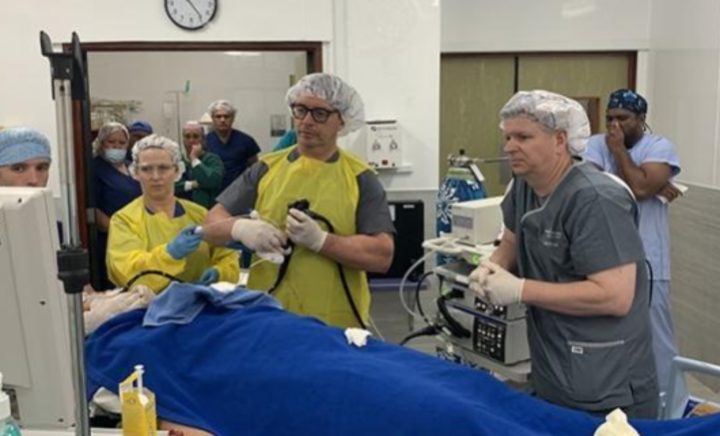 "Somehow society leaders including families, elders, churches, businesses and politicians need to steer our people away from daily excessive eating and the kaikai which accompanies every event," he says.

"That is the solution, rather than surgery, in the long term."

This all feels uncomfortably close to home for me. Since I've been in Rarotonga, I've joined a gym, and I've probably eaten less junk food that I have for decades. And yet, I've put on weight.

"There's a saying in bariatrics, you can't run off a bad diet," Dunn laughs.

This week my trainer, Maiti Samson, decided it was time to lay down the law: beginning Wednesday, I would send him a photo of everything I ate, and he would critique my dietary choices.

So on Wednesday morning, I sent him a photo of my breakfast: two fried eggs on big slabs of sour dough, lashings of HP sauce, and a slice of chocolate-caramel cake.

There was a pause, before Maiti messaged back: "Okay my bro, that's a big breakfast."

(In my defence, the day Maiti had nominated as the first day of the rest of my life was also my 45th birthday.)

Dunn agrees with Maiti. It's okay to sometimes relax the rules, but let's not kid ourselves.

"That thing about breakfast being the most important meal of the day? It's nonsense. Someone just made that up."

The kaikai problem started here in the 1970s, Dunn says. Until then, Cook Islanders weren't so big. They had a protein-based diet. Sure, there was a bit of taro, but not the carb-loading of today: the bread, rice, noodles, pasta, potatoes, carrots ...

"People worked for their food, they had their own plantations. It wasn't just going down to Prime Foods or the supermarket and getting dried noodles from China."

He says we need to cut back on the carbs and sugar; he doesn't eat dessert at all. Even fruit should be eaten in moderation; the papayas and mangoes and bananas grown here are high-sugar; we don't grow low-sugar fruits like berries.

We need to go back to protein (meat and fish and eggs) and "above-ground" vegetables like cauliflower, aubergine, courgettes, pumpkins and salad greens.

"The problem is the type of food and the volume of food.

"Obesity has become normalised. Perceptions of body types have changed. You look at someone who's overweight, and you think they're normal."

He believes the Cook Islands are small enough, closely related enough, that we can make a big change.

"You can look at this and be despondent, but the people of the Cook Islands are smart enough to do this, just as they are with quitting smoking. And that's fantastic. In a smart and caring society, drugs and smoking and domestic violence are not okay. And I think we can add obesity to that list.

"Change is going to sweep this place. Everyone will support each other. And on Rarotonga - there's nowhere to run, nowhere to hide."

We have changed back into our work clothes. And as I leave, Dunn suggests we meet up for dinner next time he's in town. With respect, I say, I'm not sure that going out for dinner with him sounds like much fun ...

He laughs. (And to be fair, he is good company.)

"I love food," he reminds me. "But I work with a lot of obese people who actually hate food. It makes them miserable."

"So you need to get in a positive way of thinking about this. Not, 'what is this taking away from my life', but 'what is this adding to my life?' Which is actually a new enjoyment of food."

So he has one more piece of bite-sized advice: slow, small and savour. Sit down, be social, put your knife and fork down between each mouthful; think about how good the food tastes. Give your mind time to appreciate the food - and to tell your stomach when it's full. Don't be embarrassed to leave food on your plate.

For lunch yesterday, I had bok choy salad and two hard-boiled eggs. A colleague looked at it with something approaching revulsion: "You got any meat in that thing or is it just rabbit food?"

I felt much the same way. I confess, I wasn't embarrassed to leave some of it on my plate.

- This story first appeared in the Cook Islands News