Coronavirus cases rose to 130 in Italy prompting authorities to seal off towns and close the Venice Carnival, and infections rose in South Korea and Italy. 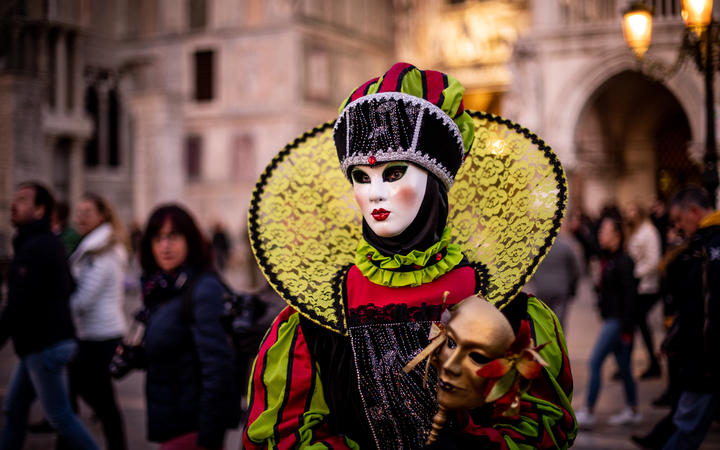 The Venice Carnival had been due to close on Tuesday but authorities closed it early in a bid to control the spread of Covid-19. Photo: AFP

The government in Seoul put the country on high alert after the number of infections surged over 600 with six deaths. A focal point was a church in the southeastern city of Daegu, where a 61-year-old member of the congregation with no recent record of overseas travel tested positive for the virus.

In Italy, the number of cases jumped to above 130 from just three before Friday. Authorities sealed off the worst affected towns and banned public gatherings in much of the north, including halting the carnival in Venice, where there were two cases, to try to contain the biggest outbreak in Europe.

Italian health authorities were struggling to find out how the virus started. "If we cannot find 'patient zero' then it means the virus is even more ubiquitous than we thought," said Luca Zaia, the regional governor of the wealthy Veneto region.

Iran, which announced its first two cases on Wednesday, said it had confirmed 43 cases and eight deaths, with most of the infections in the Shi'ite Muslim holy city of Qom.

China, which has seen the vast majority of cases, reported 648 new infections. But only 18 were outside of Hubei province, the lowest number outside the epicentre since authorities began publishing data a month ago and locked down large parts of the country.

"At present, the epidemic situation is still severe and complex, and prevention and control work is in the most difficult and critical stage," President Xi Jinping said.

The virus has killed 2442 people in China, which has reported 76,936 cases, and has slammed the brakes on the world's second largest economy. It has spread to some 26 other countries and territories, with a death toll of around two dozen, according to a Reuters tally.

"Despite the continuing decline in reported cases from China, the last two days have seen extremely concerning developments elsewhere in the world," said Paul Hunter, professor of medicine at Britain's University of East Anglia.

The coronavirus has been fatal in 2 percent of reported cases, with the elderly and ill the most vulnerable, according to the World Health Organization (WHO), which said on Saturday it was worried by the detection of infections without a clear link to China. 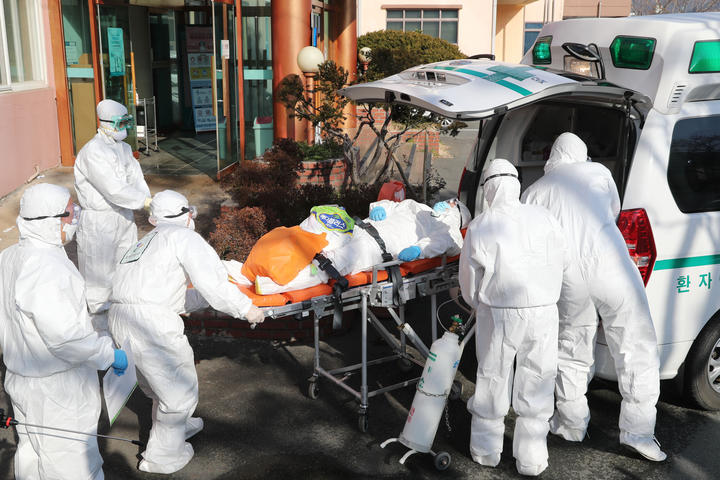 Medical workers in South Korea transfer a suspected coronavirus patient from Daenam Hospital in Cheongdo, where a total of 114 infections have now been identified. Photo: AFP

In South Korea, Catholic churches in Daegu and Gwangju have suspended services and other gatherings, while churches elsewhere saw declines in attendance on Sunday, especially among the elderly.

"If the situation gets worse, I think we'll need to take more measures," said Song Gi-young, 53, wearing a face mask at church.

"Devotees shouldn't go to any risky places ... Hasn't it become so widespread because those people didn't get checked?"," he said.

It also enables the government to forcibly prevent public activities and order the temporary closure of schools, the Yonhap News Agency said, although the government gave no immediate details on what steps could be taken. 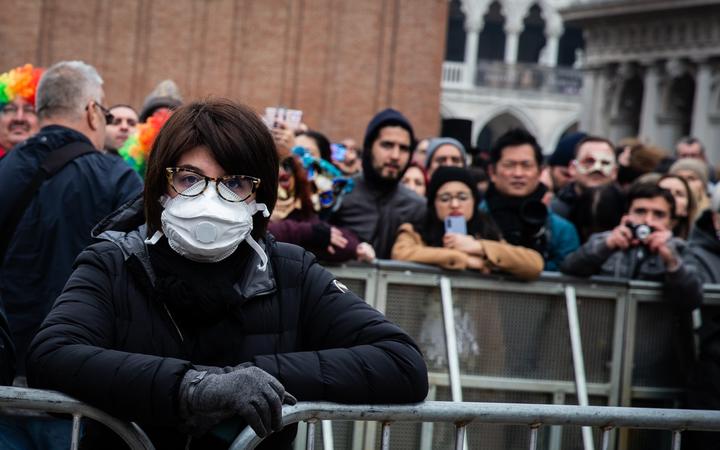 Concern about the reach of the coronavirus also grew in Europe and the Middle East.

In Italy, schools and universities were closed and some soccer matches postponed in the affected northern regions of Lombardy and Veneto, the country's industrial heartland.

Almost a dozen towns in Lombardy and Veneto with a combined population of some 50,000 have effectively been placed under quarantine, with locals urged to stay home and special permission needed to enter or leave the designated areas.

The European Union said it had confidence in the Italian authorities. "We share concern for possible contagion (but) there is no need to panic," the bloc's Economic Affairs Commissioner Paolo Gentiloni told reporters.

Prime Minister Giuseppe Conte announced on Saturday that "extraordinary measures" would come into force to try to stem the rising number of coronavirus cases. He said the quarantine restrictions could last for weeks. Universities in Milan have been closed and the city's mayor, Giuseppe Sala, said schools would also close their doors while the outbreak continued, the BBC reported.

Iran reported a total of 43 infections, with eight deaths - all since Tuesday. Saudi Arabia, Kuwait, Iraq, Turkey and Afghanistan imposed travel and immigration restrictions on Iran.

The potential economic impact of the disease was prominent at a meeting of G20 finance ministers in Riyadh.

China's President Xi Jinping highlighted the importance of fighting the epidemic in the capital Beijing, which has recently required people arriving from elsewhere in China to be quarantined at home for 14 days.

He said it would have a relatively big, but short-term impact on the economy and that Beijing would step up policy adjustments to help cushion the blow.

In Japan, where the government is facing growing questions about whether it is doing enough to counter the virus, authorities had confirmed 773 cases by early Sunday evening.

Most of them were from a cruise ship quarantined near Tokyo, the Diamond Princess. A third passenger, a Japanese man in his 80s, died on Sunday.