Bernie Sanders has cemented his status as the Democratic front-runner to take on Donald Trump in November's US presidential election. 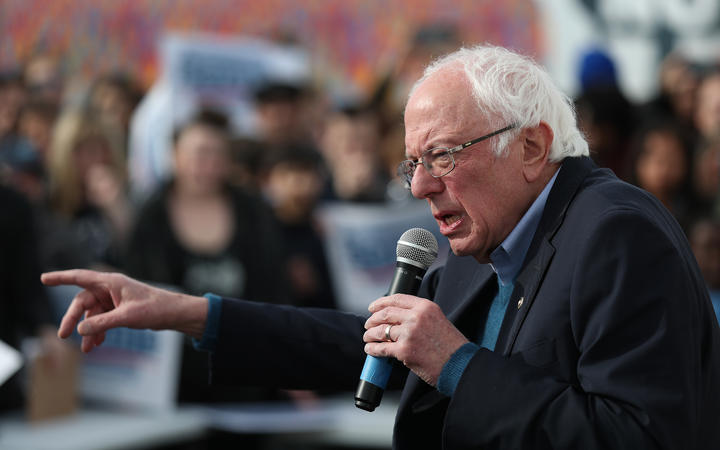 He is projected to win Nevada's caucuses, and early results suggest he is on course for a large victory.

There is a long way to go, however, until a nominee is confirmed.

Early results also suggest former vice-president Joe Biden has performed better in Nevada than in the other two states which have voted so far.

He had underwhelming results in Iowa and New Hampshire. Those states kicked off the four-month long primaries process, in which candidates are jostling to convince voters why they are the best candidate to challenge Mr Trump.

What's the latest from Nevada?

The BBC's US partner network CBS and other outlets projected a victory for Mr Sanders with only a handful of votes counted.

So far, with 43 percent of the ballots counted in Nevada, Mr Sanders, the left-wing senator for Vermont, has 47 percent of the vote, ahead of Mr Biden on 21 percent. The field is then split between a number of other moderates, with Pete Buttigieg on 15 percent and Elizabeth Warren on 9 percent.

Candidates who have won more than 15 percent of the vote will be awarded delegates, who will then go to the party's convention in July to support their Democratic candidate.

Before Saturday, Mr Sanders had 21 delegates, and while he will remain a long way off the 1,990 needed to become the nominee, victory in Nevada will bring him another small step closer towards that total.

The last caucuses in Iowa were plagued by technical glitches that meant results struggled to be recorded using a new app. While that app is not being used in Nevada, there are reports of volunteers struggling to connect to a telephone number used to record results. Organisers say results should start flowing soon.

In a victory speech in Texas, Mr Sanders praised his "multi-generational, racial coalition" team of supporters, and attacked Mr Trump. "The American people are sick and tired of a president who lies all the time," he said.

Mr Biden's campaign was in buoyant mood too, declaring that "the comeback starts here". In a tweet, Mr Trump praised Mr Sanders' win, but also called him "Crazy Bernie".

How has Bernie Sanders done so well?

Polling agency Edison Research said more than half of participating Hispanics had decided to vote for him before the caucuses. In a state of more than three million people where Hispanics make up a third of the population, this was significant.

Despite some concern from union members about Mr Sanders' plan to shake up their delicately negotiated healthcare plans, 36 percent of union members backed him. One in four Nevada residents is in a union, or has a relative in a union.

Polls suggest he did well across all age groups - apart from over-65s. He was especially popular among young voters in Nevada, and among white college-educated women, who are expected to be a key demographic in November's election.

Four years ago, the Nevada caucuses were the moment Hillary Clinton began to turn the tide against Sanders in his bid for the Democratic presidential nomination. This time around, the results could be further evidence that the Sanders surge is very real and very durable.

Caucus entrance polls show Sanders won a dominating 53 percent of the Hispanic vote - a demographic he struggled with against Clinton. That bodes well for the senator in the two biggest prizes coming up, Texas and California, with their sizeable Hispanic populations.

All eyes turn to South Carolina's primary next Saturday. It will be the biggest of the four states to have voted before March - and the one with the largest percentage of African-American voters.

This should favour Mr Biden, who is popular among African Americans, but Mr Sanders is also expected to do well, and polls suggest that billionaire hedge-fund manager Tom Steyer could claim his first delegates there.

A few days later, on 3 March, is Super Tuesday, when 14 states vote. They include California and Texas, the two states with the most delegates. By the end of Super Tuesday, it may be much clearer who the Democratic candidate will be.