Roger Stone, long-time adviser and ally to President Donald Trump, has been sentenced to three years and four months in jail. 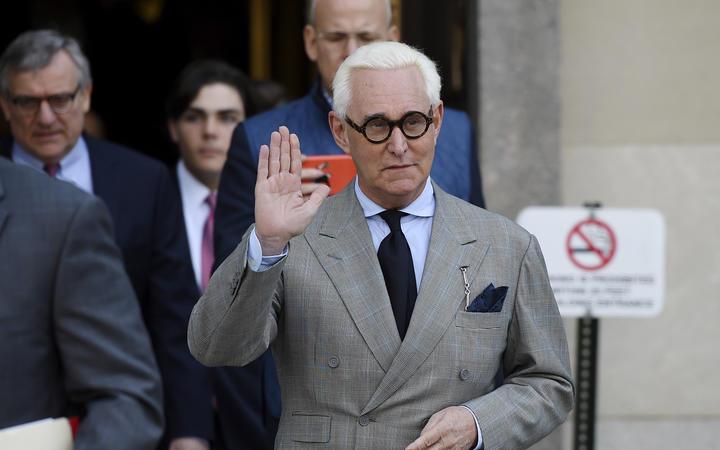 Stone, 67, was found guilty in November on seven counts of lying to Congress, obstruction and witness tampering.

He is the sixth Trump aide convicted in a criminal case resulting from Robert Mueller's investigation into alleged collusion between Russia and the Trump campaign during the 2016 election.

Trump has hinted he may pardon his ally.

Stone has maintained the case against him was politically motivated.

Explaining the sentence, Judge Amy Berman Jackson said Stone had engaged in "intolerable" "threatening and intimidating conduct" toward her.

Last week, prosecutors on the case quit after the Justice Department said it planned to reduce the amount of prison time sought for the president's long-time ally.

The prosecutors had recommended a sentence of seven to nine years.

In a tweet, Trump had called the recommendation "very horrible and unfair".

The court heard that Stone had told five lies under oath, including about his conversations with Trump campaign officials and a supposed "intermediary" with WikiLeaks in early August 2016.

He also lied about the existence of certain texts or emails.

Speaking in a Washington courtroom on Thursday, Judge Jackson said Stone "knew exactly what he was doing" when he posted an image to social media last year of a gun sight over the judge, calling the proceedings a "show trial".

"This is intolerable to the rule of justice," Judge Jackson said. "The court cannot just sit idly by and say 'that's just Roger being Roger.'"

Stone, wearing sunglasses and a dark fedora, declined to speak at Thursday's hearing.

His lawyer, Seth Ginsberg, said Stone's public persona - that of a self-described "dirty trickster" - masked the true "human being", a spiritual man, devoted to his family.

Ginsberg had argued that Stone did not deserve the tougher sentencing guidelines demanded by federal guidelines.

Stone will serve two years' probation after his custodial sentence. He has also been fined $20,000 (NZ$31,563) and must serve 250 hours of community service.