US President Donald Trump's adviser Roger Stone has been convicted on seven counts of lying to Congress, obstruction and witness tampering. 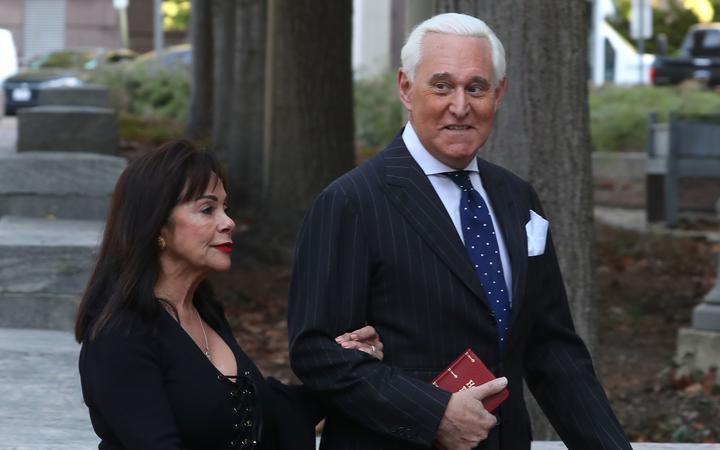 Roger Stone, accompanied by his wife, Nydia, arrives in court in Washington to hear his fate. Photo: AFP

The court heard he lied about his efforts to learn more about when WikiLeaks would publish damaging emails about Hillary Clinton in 2016.

The jury returned its verdict on day two of deliberations in Washington DC.

Witness tampering carries a sentence of up to 20 years in prison. The other counts can carry five years each.

The court heard Stone lied in September 2017 during his testimony to the House of Representatives Intelligence Committee's inquiry into alleged Russian interference in the US elections a year earlier.

He was asked about WikiLeaks' release of damaging emails about Mrs Clinton - President Donald Trump's Democratic rival in the vote.

US intelligence officials and Department of Justice special counsel Robert Mueller later concluded those messages had been stolen by Russian hackers.

Stone is the sixth Trump aide or adviser convicted in a criminal case resulting from Mr Mueller's since-concluded investigation.

The trial heard Stone had told five lies under oath, including about his conversations with Trump campaign officials and a supposed "intermediary" with WikiLeaks in early August 2016.

He also lied about the existence of certain texts or emails.

Prosecutors told the court that Stone had made the false statements to protect Mr Trump's image.

Stone - who did not take the stand during the trial - maintained the case against him was politically motivated.

Mr Bannon told the court that Stone had boasted about his links to WikiLeaks and its founder Julian Assange.

Stone had also tipped off the Trump campaign about new batches of damaging emails.

He told Congress his intermediary with WikiLeaks was New York radio host and comedian Randy Credico, who interviewed Assange in 2016.

When Credico later testified to US lawmakers, he said Stone had advised him to "do a 'Frank Pentangeli'" - referring to a character in the Godfather movies who lies to Congress.

Stone also threatened Credico's therapy dog, Bianca, saying he was "going to take that dog away from you", the trial heard.