Donald Trump's ex-lawyer has claimed Mr Trump wanted him to lie about a property deal in Moscow amid his election campaign. 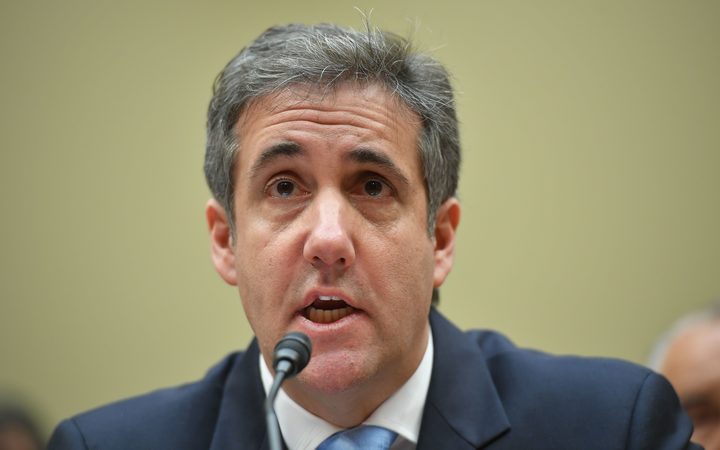 Michael Cohen, US President Donald Trump's former personal lawyer, is sworn in to testify before the House Oversight and Reform Committee. Photo: AFP

In a blistering opening statement, Cohen branded Mr Trump a "racist", a "conman" and a "cheat".

Cohen, 52, will start a three-year prison term in May for the campaign finance violation of paying hush money to one of Mr Trump's alleged mistresses, tax evasion and lying to Congress.

In his public testimony to the House of Representatives Oversight Committee on Wednesday, he said Mr Trump "knew of and directed" plans for a Trump Tower Moscow, while stating publicly that he had no dealings in Russia.

"At the same time I was actively negotiating in Russia for him," Cohen testified, "he would look me in the eye and tell me there's no business in Russia and then go out and lie to the American people by saying the same thing. In his way, he was telling me to lie."

"He wanted me to lie," the witness added.

However, Cohen has been convicted of lying to Congress when he testified in 2017 that attempts to build a Trump skyscraper in Moscow had stopped by January 2016.

He has since acknowledged negotiations actually continued until June 2016 in the midst of the election campaign, though the real estate project ultimately did not go ahead.

Cohen apologised on Wednesday for his earlier false statements to Congress, which he claimed were "reviewed and edited" by Mr Trump's lawyers.

Jay Sekulow, counsel to President Trump, said in a statement after the hearing: "Today's testimony by Michael Cohen that attorneys for the president edited or changed his statement to Congress to alter the duration of the Trump Tower Moscow negotiations is completely false."

Cohen said he was in Mr Trump's office in July 2016 when Roger Stone, a longtime political adviser, called the then-Republican presidential candidate.

The witness said Mr Stone rang Mr Trump to let him know he had been speaking to Wikileaks founder Julian Assange, who told him there would be a "massive dump" of emails within a couple of days that would politically embarrass Hillary Clinton's White House campaign.

Cohen said Mr Trump responded along the lines of "wouldn't that be great".

Mr Trump has denied having prior knowledge about Wikileaks' disclosure of Democratic National Committee (DNC) emails during the election.

The messages - which US authorities say were hacked by Russian intelligence - caused a damaging rift among Democrats by exposing how party officials preferred Mrs Clinton over her challenger for the presidential nomination, Bernie Sanders.

Mr Stone, a self-proclaimed political dirty trickster, is currently facing charges of lying to Congress about his communications with Wikileaks and witness tampering.

Cohen also testified that, contrary to Mr Trump's repeated claims, he did have advance knowledge of a meeting at Trump Tower in Manhattan between his campaign aides and a Russian lawyer promising "dirt" on Mrs Clinton.

The June 2016 meeting has been investigated by special counsel Robert Mueller, who is winding up a 21-month justice department inquiry into whether the Trump campaign colluded with an alleged Kremlin plot to influence the 2016 US presidential election.

Cohen spoke about an incident when Mr Trump's son, Donald Jr, walked behind his father's desk and told him in a low voice: "The meeting is all set."

Importantly, Cohen also said under oath that he has no direct evidence that Mr Trump or his campaign colluded with Russia.

He said: "He once asked me if I could name a country run by a black person that wasn't a 'shithole.'

"This was when Barack Obama was President of the United States.

"While we were once driving through a struggling neighbourhood in Chicago, he commented that only black people could live that way.

"And he told me that black people would never vote for him because they were too stupid. And yet I continued to work for him."

He submitted to the committee a copy of his $130,000 (£97,000) wire transfer to Stormy Daniels to keep her quiet - a payment which led to Cohen's conviction for campaign finance violations.

Cohen also gave the panel a copy of a $35,000 cheque dated August 2017 - one of a series he said Mr Trump signed to pay him back in instalments.

"Lying to the First Lady is one of my biggest regrets," Cohen said. "She is a kind, good person. I respect her greatly - and she did not deserve that."

The 52-year-old was convicted last year by New York federal prosecutors of campaign finance violations and tax evasion and by special counsel Robert Mueller of lying to Congress about Trump Organization plans in Moscow.

During the hearing, the president's fellow Republicans pilloried committee Democrats for inviting a man convicted of lying to Congress.

Jim Jordan of Ohio called Cohen - who lost his law licence on Tuesday - a "fraudster" and "cheat".

But committee chairman Elijah Cummings, a Maryland Democrat, defended the decision to give Cohen a public platform, saying it was the panel's job to search out the truth.

After the hearing, when asked whether the president committed a crime while in office, Chairman Cummings said: "It appears that he did".

He did not offer any further detail on what crime he thought Mr Trump committed.