Firefighters say the past week's torrential rain has extinguished the Gospers Mountain "mega-blaze" north-west of Sydney and is on track to put out the state's remaining fires this week. 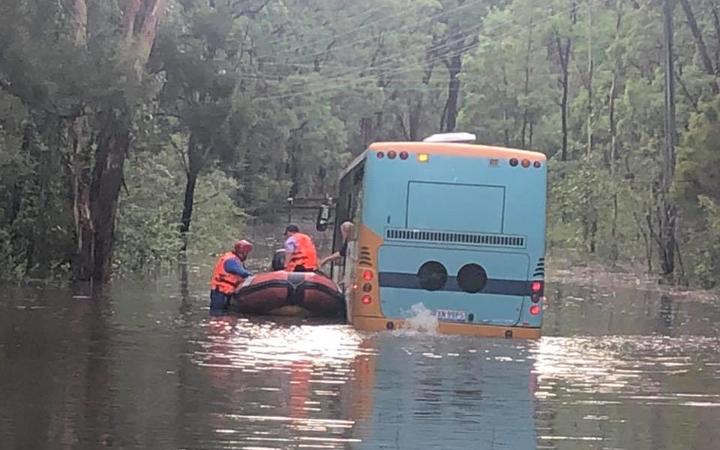 A bus driver and six children had to be rescued from floodwaters in Maraylya. Photo: Facebook / NSW SES Hawkesbury Unit

The fire, which burned through more than 512,000 hectares after it was ignited by lightning strikes in a remote forested area on 26 October, was once considered "too big to put out".

The Bureau of Meteorology (BOM) said the past four days in Sydney had been the wettest since 1990, with a combined 391.6 millimetres of rain falling.

The torrential downpour has thrown the city and Sydney's outer suburbs into disarray, with flash flooding, evacuation orders, trees toppling onto cars and disrupted train services.

Around 200 people have so far been rescued after driving into floodwaters.

More than 15,600 calls - a record number - were made to triple-0 in the 42 hours from 5pm local time on Saturday, with Fire and Rescue NSW attending 3068 incidents.

"The number of calls that we received in the peak period was actually almost double that we were receiving at the worst of the bushfires," he said.

"So I think that gives a good indication of the scale of the impact on such a broad part of the community of NSW."

This is the most positive news we've had in some time.

The recent rainfall has assisted firefighters to put over 30 fires out since Friday. Some of these blazes have been burning for weeks and even months.#NSWRFS #NSWFires pic.twitter.com/fNyuSE6nAx

Earlier, NSW Police concluded their search for a driver feared missing in floods after his car was washed off a causeway at Galston, in the city's north.

The State Emergency Service (SES) and police divers were unable to locate a vehicle but said they would continue conducting inquiries about the incident.

Despite the chaos, the end of the Gospers Mountain fire represented a major turning point in this season's unprecedented bushfire season.

There are now just 17 fires burning across the state.

The fire which damaged and destroyed homes across Lithgow, the Hawkesbury and the Central Coast, was officially declared "out" at 8.20am.

"A very damaging and destructible fire … a number of those communities obviously rejoicing with this rain that they've had now, and will now start that process of rebuilding."

Morris said five fires remained uncontained across the state, all within the Bega and Snowy Valley areas.

He said the RFS was on track to have all the remaining fires in the state put out some time this week.

For today, the clean-up continues, and the SES urged people in Sydney to stay home from work after dozens of schools were closed and several evacuation orders were put in place

"Everywhere has been hit, it's hard to pinpoint where it's worst," Matt Kirby from the SES said.

The rain has, however, meant the Warragamba Dam - which supplies 80 percent of Sydney's water - could soon fill to 70 percent capacity. Just days ago it was at 42 percent.

The Insurance Council of Australia has already declared the weekend a "catastrophe", with around 10,000 claims lodged yesterday.

The Hawkesbury-Nepean, Georges, Parramatta and Colo rivers have all spilled over and caused localised flooding.

Evacuation orders were issued for suburbs including Moorebank, Chipping Norton and Milperra as the Georges River swelled to unprecedented levels.

As the system moved to the South Coast, people in Lake Conjola - where the bushfire clean-up continues - were warned flooding is likely.

Floodwaters have also risen around Lake Illawarra and road access may be cut.

Kirby said people should work from home today if they could, and that the organisation was expecting many more calls for assistance.

A total of 54 schools have been closed in areas including Narrabeen, Picton, Gosford, Wyong, Penrith and Paramatta.

"We are trying to ask people to reconsider their travel, a number of roads are closed," Kirby said.

"And we are still seeing people driving into floodwater."

NSW Emergency Services Minister David Elliott said it was disappointing motorists were not heeding warnings after he called out "boofhead behaviour" yesterday.

"We have 400 SES volunteers trying to complete the backlog this morning and unfortunately this has included 150 flood rescues," he said.

"The message to the motorists of Sydney and indeed the wider metropolitan area is if you can avoid being on the roads do so."

It was not just the roads being hit - the city's train transport network also experienced significant delays this morning.

The T1 North Shore line was out of action from Gordon to North Sydney due to a landslide at Artarmon.

A landslide at Leura in the Blue Mountains has caused trains between Springwood and Bathurst to be cancelled for several days.