Behold the Sun's convulsing surface, at a level of detail never seen before! 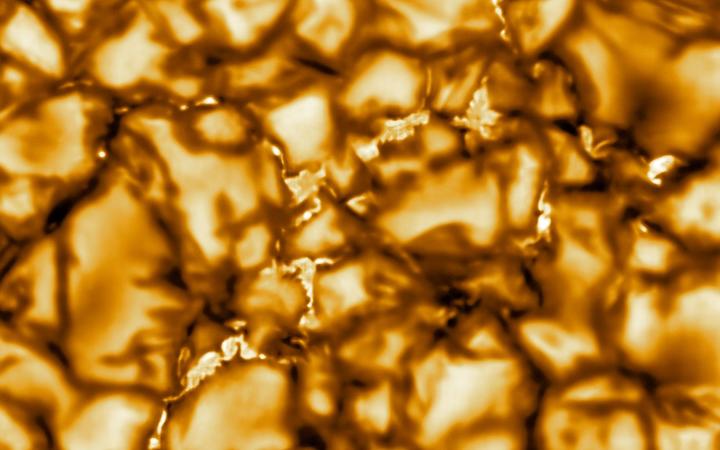 The Daniel K Inouye Solar Telescope on Hawaii has released pictures that show features as small as 30km across.

This is remarkable when set against the scale of our star, which has a diameter of about 1.4 million km and is 149 million km from Earth.

The cell-like structures are roughly the size of the US state of Texas. They are convecting masses of hot, excited gas, or plasma.

The bright centres are where this solar material is rising; the surrounding dark lanes are where plasma is cooling and sinking.

DKIST is a brand new facility positioned atop Haleakalā, a 3000m-high volcano on the Hawaiian island of Maui.

Its 4m primary mirror is the world's largest for a solar telescope.

The telescope will be used to study the Sun's workings. Scientists want fresh insights on its dynamic behaviour in the hope that they can forecast better its energetic outbursts - what is often referred to as "space weather".

The NSF's Inouye Solar Telescope provides unprecedented close-ups of the sun’s surface, but ultimately it will measure the sun’s corona – no total solar eclipse required.

Colossal emissions of charged particles and entrained magnetic fields have been known to damage satellites at Earth, to harm astronauts, degrade radio communications, and even to knock power grids offline.

"On Earth, we can predict if it is going to rain pretty much anywhere in the world very accurately, and space weather just isn't there yet," said Matt Mountain, president of the Association of Universities for Research in Astronomy, which manages the DKIST.

"Our predictions lag behind terrestrial weather by 50 years, if not more. What we need is to grasp the underlying physics behind space weather, and this starts at the Sun, which is what the Inouye Solar Telescope will study over the next decades."

DKIST is a superb complement to the Solar Orbiter (SolO) space observatory which is being launched next week from Cape Canaveral in Florida.

This joint European-US probe will take pictures of the Sun from the closest ever vantage point - from just 42 million km from the surface. This is nearer to our star than even the planet Mercury.

SolO will see features as small as 70km across, but will sense a much broader swathe of wavelengths than DKIST and sample more levels through the Sun's atmosphere. The probe will also fly a path that gives it an unprecedented view of the polar regions.

"We have joint observing plans already made between DKIST and Solar Orbiter which will be amazing," Prof Louise Harra from the Physical Meteorological Observatory in Davos, Switzerland, told BBC News.