Antarctica's Thwaites Glacier, described as the "most important" glacier in the world, is now melting faster than previously thought.

Researchers trying to understand what's happening have drilled down through seven-hundred metres of ice, to allow a robot submarine to gather information. 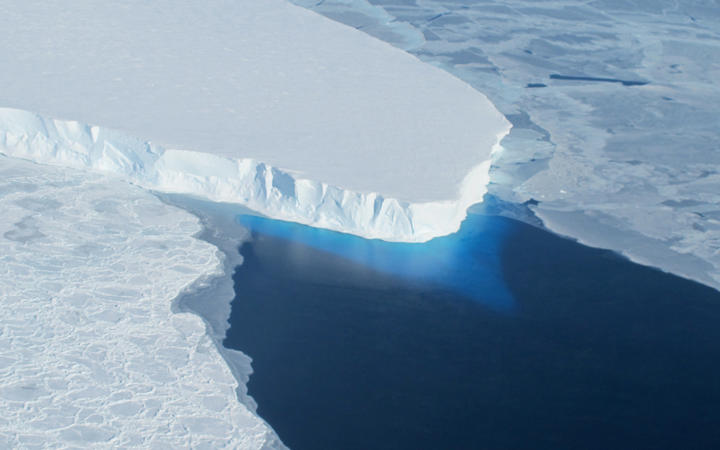 A lead scientist on the project, Dr Britney Schmidt says they need measurements from the point where the glacier meets the ocean.

"We're just at the beginning of understanding the data that we've collected this season, but it's been such a whirlwind. We just got back in from the deep field a few weeks ago. So most of the data that we're talking about were collected between the seventh and the 12th of January, so haven't had much time really to think about it.

"So what we've been doing is to put down a whole bunch of scientific sensors, and among them was ... our robots. And we put it down through 600 metres of ice and explore the ocean underneath the the ice there. And what we're looking for is evidence of how the glaciers melting and basically why so that we can try to put together better models to predict change.

"We know that Thwaites has been accelerating over the past decade or so. When the area that we were looking at we know that it's, it's changing pretty quickly that the grounding line recedes a few hundred metres a year, that it's starting to perhaps starting accelerate, and that's what we're really worried about.

''So one of the problems, of course, is that it's very hard to get to. We didn't have a lot of data, you know, boots on the ground kind of information. And so the whole point of this international Thwaites glacier collaboration has been to get scientists on the ground, get as many sensors, as many types of science done, so that we can really understand how fast it's happening."

Glaciologists have described Thwaites as the "most important" glacier in the world, the "riskiest" glacier, even the "doomsday" glacier.

It is massive - roughly the size of Britain.

It already accounts for 4 percent of world sea level rise each year - a huge figure for a single glacier - and satellite data show that it is melting increasingly rapidly.

There is enough water locked up in it to raise world sea level by more than half a metre.

And Thwaites sits like a keystone right in the centre of the West Antarctic Ice Sheet - a vast basin of ice that contains more than 3m of additional potential sea level rise.

Yet, until this year, no-one has attempted a large-scale scientific survey on the glacier.

The Icefin team, along with 40 or so other scientists, are part of the International Thwaites Glacier Collaboration, a five-year, $50m (£38m) joint UK-US effort to understand why it is changing so rapidly.

The project represents the biggest and most complex scientific field programme in Antarctic history.

Dr Schmidt said: "Icefin is kind of like a long tube. It's about three and a half metres long and 23 centimetres across. And it's basically designed to do exactly this kind of a task. So it's long and narrow so it can fit through these drill holes in the ice. And then we swim around with ocean sensors. We have four cameras on board the vehicle, two sets of sonars. And basically we're giving a picture of how the ice is changing from the grounding zone towards the open ocean.

"The grounding zone is this place where the ice starts to meet the ocean, it's basically where the glacier starts to float. And that place is the first time that the ice is exposed to melting by this warm ocean water. So what we've done is to swim right up to the problem - swim right up to where it's happening, and measure that as the glaciers is coming off the continent.

"What we've done is to create maps and create images and sonar and then measure the properties of the water column. And that really tells us how fast the melting is happening, and what work is being done by different parts of the ocean. All of that kind of has to kind of be put together as a big puzzle to understand what's happening to the glacier."

Why is Thwaites important?

West Antarctica is the stormiest part of the world's stormiest continent.

And Thwaites is remote even by Antarctic standards, more than 1600km from the nearest research station.

Only four people have ever been on the front of the glacier before and they were the advance party for this year's work.

But understanding what is happening here is essential for scientists to be able to predict future sea level rise accurately.

The ice in Antarctica holds 90 percent of the world's fresh water, and 80 percent of that ice is in the eastern part of the continent.

The ice in East Antarctica is thick - more than a mile thick on average - but it rests on high ground and only creeps sluggishly to the sea.

Some of it has been around for millions of years.

Western Antarctica, however, is very different. It is smaller but still huge, and is much more vulnerable to change.

Unlike the east it doesn't rest on high ground. In fact, virtually the whole bed is way below sea level. If it weren't for the ice, it would be deep ocean with a few islands.

The reason the scientists are so worried about Thwaites is because of that downward sloping submarine bed.

It means the glacier gets thicker and thicker as you go inland.

At its deepest point, the base of the glacier is more than a mile below sea level and there is another mile of ice on top of that.

What appears to be happening is that deep warm ocean water is flowing to the coast and down to the ice front, melting the glacier.

As the glacier retreats back, yet more ice is exposed.

It is a bit like cutting slices from the sharp end of a wedge of cheese.

The surface area of each one gets bigger and bigger - providing ever more ice for the water to melt.

And that is not the only effect.

Gravity means ice wants to be flat. As the front of the glacier melts, the weight of the vast reservoir of ice behind it pushes forward.

It wants to "smoosh out," explains Dr Kiya Riverman, a glaciologist at the University of Oregon. The higher the ice cliff, she says, the more "smooshing" the glacier wants to do.

So, the more the glacier melts, the more quickly the ice in it is likely to flow.

"The fear is these processes will just accelerate," she says. "It is a feedback loop, a vicious cycle."

Drilling through the ice

The scientists at the grounding zone camp plan to use hot water to drill their hole through the ice.

Everyone sets to work with spades, hefting snow into the "flubber" - a rubber container the size of a small swimming pool.

"It'll be the most southerly jacuzzi in the world," jokes Paul Anker, a British Antarctic Survey drilling engineer.

The principle is simple - you heat the water with a bank of boilers to just below boiling point and then spray it onto the ice, melting your way down.

But drilling a 30cm hole through almost half a mile of ice at the front of the most remote glacier in the world is not easy.

The ice is about -25C so the hole is liable to freeze over and the whole process is dependent on the vagaries of the weather.

By early January, the flubber is full and all the equipment is ready but then we get a warning that yet another storm is on its way.

Antarctic storms can be very intense. It is not unusual to have hurricane force winds as well as very low temperatures.

This one is relatively mild for Antarctica but still involves three days of wind gusting up to 50mph. It blows huge drifts of snow into the camp, swamping the equipment, and all the work stops.

Scientists say what is happening here is down to the complex interplay of climate, weather and ocean currents.

The key is the warm seawater, which originates on the other side of the world.

As the Gulf Stream cools between Greenland and Iceland, the water sinks.

This water is salty, which makes it relatively heavy, but is still a degree or two above freezing.

This heavy salty water is carried by a deep ocean current called the Atlantic conveyor all the way down to the south Atlantic.

Here it becomes part of the Antarctic Circumpolar Current, flowing deep - a third of a mile (530m) - below a layer of much colder water.

The surface water in Antarctica is very cold, just above -2C degrees, the freezing point of salt water.

The deep warm circumpolar water travels all the way around the continent but has been increasingly encroaching on the icy edge of West Antarctica.

This is where our changing climate comes in.

The scientists say the Pacific Ocean is warming up and that is shifting wind patterns off the coast of West Antarctica, allowing the warm deep water to well up over the continental shelf.

"The deep Antarctic circumpolar water is only a handful of degrees warmer than the water above it - a degree or two above 0C - but that's warm enough to light this glacier up," says David Holland, an oceanographer with New York University and one of the lead scientists at the grounding zone camp.

Most glaciers that flow into the sea have what is known as an "ice pump".

Sea water is salty and dense which makes it heavy. Melt water is fresh and therefore relatively light.

As the glacier melts, the fresh water therefore tends to flow upwards, drawing up the heavier warmer sea water behind it.

When the sea water is cold, this process is very slow, the ice pump usually just melts a few dozen centimetres a year - easily balanced by the new ice created by falling snow.

But warm water transforms the process, according to the scientists.

Evidence from other glaciers shows that if you increase the amount of warm water that is reaching the glacier the ice pump works much faster.

Thwaites is not going to vanish overnight - the scientists say it will take decades, possibly more than a century.

But that should not make us complacent.