The second day of the impeachment trial of President Donald Trump is hearing opening arguments from the Democrats.

House impeachment manager Adam Schiff began by setting out the timeline and facts behind the impeachment inquiry.

From Switzerland, where he is attending World Economic Forum, Trump decried the process as a "disgrace".

Trump is accused of breaking the law by pressuring Ukraine's leader to dig up damaging information on a political rival.

In July, he urged Ukrainian president Volodymyr Zelensky to investigate Joe Biden, one of the front-runners to take him on in next year's presidential election. It is illegal to ask foreign entities for help in winning a US election.

Trump was impeached on 18 December on allegations he abused his power and obstructed Congress by withholding documents and witnesses.

In opening arguments this morning, Schiff emphasised Trump's "infamous" 25 July phone call with Zelensky - at the centre of today's trial.

A rough transcript of this conversation, released in September, revealed Trump had urged President Zelensky to investigate former US Vice-President Joe Biden, the front-runner to take on Trump in the 2020 election, as well as Biden's son, who held a board position with a Ukrainian gas firm.

Democrats argue that the $391m in military aid temporarily blocked to Ukraine is proof of Trump's abuse of office.

The 100-seat Senate is controlled by 53 Republicans, making it highly unlikely that Trump will be voted out of office. 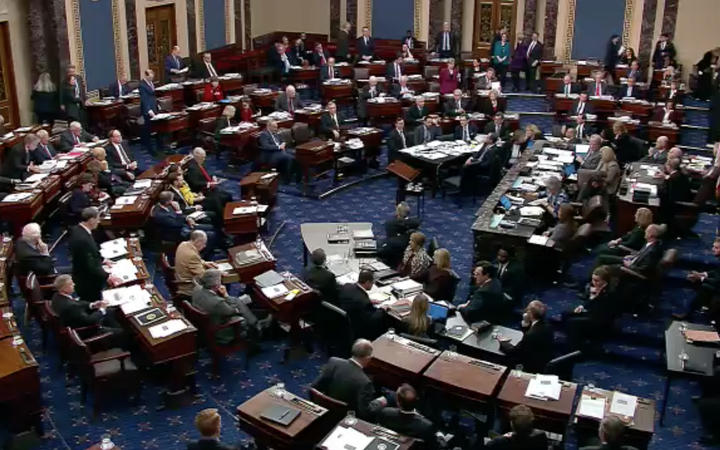 The US Senate during the impeachment trial. Photo: AFP / US Senate Television

The third impeachment trial in US history began yesterday with a 13-hour debate over the rules. No witnesses have yet been authorised to testify.

The Republican-controlled US Senate rejected Democratic efforts to obtain evidence and call witnesses. Senators voted along party lines, 53-47, to block three separate motions from Democratic leader Chuck Schumer to subpoena records and documents from the White House, the State Department and the Office of Management and Budget related to Trump's dealings with Ukraine.

So far, impeachment has played out along party lines, and Trump, a Republican, is expected to be acquitted in the Senate - controlled by his party.

Still, there is speculation that some Republicans could buck their party at some point in this trial, perhaps when it comes to seeking witness testimony.

Here are three senators worth keeping an eye on:

She has a reputation as a moderate Republican, espousing support for abortion rights and LGBT issues. In 1999, she broke with her party by voting to acquit Democratic President Bill Clinton in his impeachment trial.

Collins has already voted with Democrats once in Trump's impeachment, voting to extend the amount of time House managers and Trump's legal team have to respond to motions.

She will be closely watched in Maine, where she is up for re-election in November and is considered one of the most politically vulnerable Republicans.

The former Republican presidential nominee is a frequent critic of the president and has already said he'd be interested in hearing from witnesses, including former National Security Adviser John Bolton, whose testimony is much desired by Democrats.

Romney might have more leeway to break from his party. He isn't up for election again until 2024 and represents a state where Trump isn't very popular, meaning a vote against the president won't necessarily amount to a political death warrant upon himself.

She has already proven her willingness to break with Trump and side with Democrats on key issues.

Murkowski famously voted "present" in the confirmation hearing of now-Supreme Court Justice Brett Kavanaugh and helped block a repeal of Obamacare by Republicans.

She has two more years until she is up for reelection - and Alaskans are used to her breaking ranks - so she may have the political latitude to vote alongside Democrats again.