Donald Trump's impeachment trial has begun in earnest in the US Senate amid bitter divisions on the proposed rules of the trial and whether witnesses can be called.

The Republican-controlled US Senate rejected a Democratic bid to force the White House to produce documents and evidence.

As only the third impeachment trial in US history began in earnest, senators voted 53-47 along party lines to block a motion from Democratic leader Chuck Schumer to subpoena White House documents related to Trump's dealings with Ukraine.

Schumer immediately introduced a second motion demanding a subpoena of State Department records and documents related to the matter. The Senate will debate the motion for up to two hours.

Trump is accused of abuse of power to help him get re-elected and obstructing Congress. Democrats have called on the Senate to remove the president from office for pressuring Ukraine to investigate former Vice President Joe Biden, a political rival, and then impeding the inquiry into the matter.

Democrats accused the top Senate Republican, Mitch McConnell, of rigging the impeachment trial with proposed rules that would prevent witnesses from testifying and bar evidence gathered by investigators.

During early debate, Trump's chief legal defender attacked the case as baseless and a top Democratic lawmaker said there was "overwhelming" evidence of wrongdoing.

With the television cameras rolling, US Chief Justice John Roberts convened the proceedings and the two sides began squabbling over Senate Majority Leader Mitch McConnell's proposed rules for the trial.

White House counsel Pat Cipollone, who is leading Trump's defence, attacked the foundation of the charges against the Republican president and said Democrats had not come close to meeting the US Constitution's standard for impeachment.

"The only conclusion will be that the president has done absolutely nothing wrong," Cipollone said as he argued in favor of McConnell's proposal to decide on whether to allow further witnesses or documents later in the trial.

"There is absolutely no case," he said.

Schiff said that although the evidence against Trump was "already overwhelming," further witness testimony was necessary to show the full scope of the misconduct by the president and those around him.

"For all of the name-calling and fingerpointing from the president's counsel, we did not hear a single argument on the merits about why there should not be the documents and witnesses we requested in this trial," Schumer said.

McConnell unveiled a plan on Monday for what would be a potentially quick trial without new testimony or evidence. It would have given Democratic prosecutors and Trump's lawyers 48 hours, evenly split, to present their arguments over four days.

That plan was changed to give each side three days to give up to 24 hours of opening arguments. The rules also will allow the House's record of the impeachment probe admitted as evidence in the trial, as Democrats had demanded.

"We discussed it at lunch. It was pretty much a (Republican) conference consensus that made a lot more sense," Republican Senator Ron Johnson said.

Democrats had accused McConnell of trying to rig a trial with proposed rules they said would prevent witnesses from testifying and bar evidence gathered by investigators.

In a statement, the seven House Democrats who will set out the case against Trump said the trial was a "White House-driven and rigged process, with a truncated schedule designed to go late into the night and further conceal the President's misconduct".

McConnell has repeatedly said the rules would mirror those the Senate used in the 1999 impeachment of then-President Bill Clinton, a Democrat. Republican senators have not ruled out the possibility of further witness testimony and evidence. 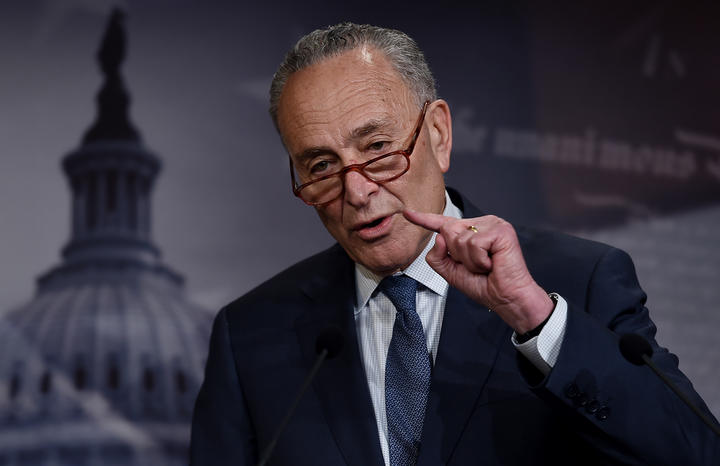 Under McConnell's plan, lawyers for Trump could move early in the proceedings to ask senators to dismiss all charges, according to a senior Republican leadership aide, a motion that would likely fall short of the support needed to succeed.

Even if such a motion fails, Trump is almost certain to be acquitted by the 100-member chamber, where a two-thirds majority is needed to remove him from office.

But the impact of the trial on his re-election bid in November is far from clear.

No president has ever been removed through impeachment, a mechanism the nation's founders - worried about a monarch on American soil - devised to oust a president for "treason, bribery or other high crimes and misdemeanours."

Trump is attending the annual gathering of world business leaders in Davos, Switzerland, on Tuesday to project an air of business as usual and tout the strength of the US economy.

In their articles of impeachment Democrats charge that Trump abused his power as president by pressuring the government of Ukraine to help him win re-election. They accuse the president of endangering the US Constitution, jeopardising national security and undermining the integrity of the 2020 election.

They also charge Trump with obstruction of Congress for refusing to turn over records they requested as part of the impeachment probe launched in September and ordering members of his administration not to testify.

They say Trump must be removed from office to protect national security and preserve the country's system of government.

At the heart of the impeachment case is a transcript of a 5 July telephone call in which Trump pressed Ukraine's new president, Volodymyr Zelenskiy, to work with US Attorney General William Barr and Trump's personal attorney, Rudy Giuliani, to launch a corruption investigation into former Vice President Joe Biden, a top contender for the Democratic presidential nomination in 2020.

Trump also asked Zelenskiy to look into a debunked theory that Ukraine, not Russia, interfered in the 2016 presidential election.

The allegations by Trump allies against Biden - that he used his position to force the removal of a Ukrainian prosecutor in order to stop an investigation of an energy company of which his son Hunter was a director - have been discredited. Neither Trump nor his allies have provided evidence to support them, and Biden has denied them.

Current and former US government officials testified during the inquiry that Trump directed them to work with Giuliani, even though the former New York mayor had no official government position.

Some witnesses said they believed that Trump withheld nearly $400 million in security aid, as well as the prospect of a high-profile White House meeting, to pressure Zelenskiy to announce the investigations. Trump's acting chief of staff, Mick Mulvaney, also told reporters that the White House withheld the money.

The U.S. ambassador to the European Union, Gordon Sondland, provided some of the most damaging testimony before the House Intelligence Committee. He said he spoke directly with Trump about the effort to pressure Ukraine and said other top administration officials were involved. He testified that Ukrainian officials understood they would have to announce the investigations in order to receive the withheld security aid.

Trump ultimately released the money after news of the delay became public. He has yet to invite Zelenskiy to the White House.

Other evidence has emerged since House Democrats wrapped up their inquiry and voted to impeach Trump in December.

Internal government communications released through open-records requests show White House officials told the Pentagon that Trump had directed them to hold back the aid to Ukraine.

The Government Accountability Office, a non-partisan congressional watchdog, said Trump broke the law by refusing to spend money that had been approved by Congress.

One of Giuliani's former associates, Florida businessman Lev Parnas, last week provided phone messages and other evidence to the Intelligence Committee that detailed efforts by him and Giuliani to pressure Kiev.

Trump says he has done nothing wrong, and his Republican allies in the House agree with him - not a single one voted for either of the two articles of impeachment.

Trump's legal team argues that neither of the charges amounts to an impeachable offence, or even a crime, because the president has the right to decide how to conduct foreign policy and what materials to share with Congress.

They say Trump was within his rights to ask Zelenskiy to investigate the Bidens as part of a broad anti-corruption drive.

They also say Trump has the right to resist congressional demands for information.

Republican lawmakers say the Democrats' case for impeachment amounts to hearsay because it relies mostly on the testimony of mid-level officials who did not deal directly with Trump.

They say Democrats should have gone to court to force the testimony of senior officials who were directly involved in the matter after Trump ordered them not to cooperate - a process that could have taken months.

One official who could provide an eyewitness account, former national security adviser John Bolton, refused to participate in the House inquiry but said he is willing to testify in the Senate trial. It is unclear whether Republicans, who control the chamber, will agree to let him do so.

Republicans also say no actual exchange of favours took place because Zelenskiy ultimately did receive the delayed aid - as well as a meeting with Trump, although that was on the sidelines of the UN General Assembly and not at the White House - without agreeing to the investigations Trump wanted.

They argue that Democrats are subverting the will of voters who elected Trump president in 2016 because they do not like him or his policies, and turning the impeachment process into a partisan tool.