Foreign powers have agreed at a summit in Berlin to shore up a shaky ceasefire in Libya, but the meeting was overshadowed by blockades of oilfields by forces loyal to commander Khalifa Haftar that could cripple the country's crude production. 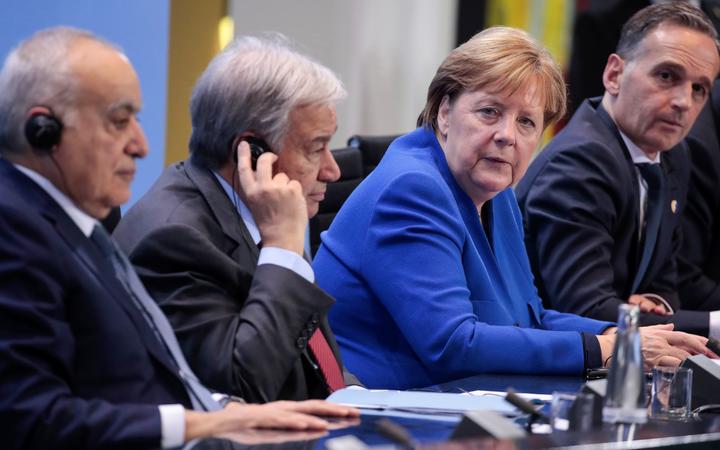 Haftar, whose self-styled Libyan National Army (LNA) is bearing down on the capital, Tripoli, with the backing of Egypt, the United Arab Emirates, Russian mercenaries and African troops, attended the one-day summit in the German capital despite having abandoned talks over a truce last week.

Libya has had no stable central authority since dictator Muammar Gaddafi was overthrown by NATO-backed rebels in 2011. For more than five years, it has had two rival governments, in the east and the west, with streets controlled by armed groups.

German Chancellor Angela Merkel told reporters that the Berlin summit, attended by the main backers of the rival Libyan factions, had agreed that a truce in Tripoli over the past week should be turned into a permanent ceasefire to allow a political process to take place.

A special committee made up of five military officials from each side will monitor the truce, she said. Foreign powers active in Libya have committed themselves to uphold an existing United Nations arms embargo and stop shipping weapons there, she added.

Serraj and Haftar did not meet in Berlin, Merkel said, highlighting the gulf between the two.

"We know that we have not solved all of Libya's problems today but we were aiming for fresh momentum," she said.

Haftar, the east's most powerful figure, has won backing from a range of foreign allies for an assault to capture Tripoli in the west, while Turkish support for Tripoli's effort to repel him has turned the conflict into a proxy war. More than 150,000 people have been displaced by fighting for the capital.

Haftar quit a Turkish-Russian summit a week ago and escalated the conflict on Friday when eastern oil ports were shut down. Libya's National Oil Corporation (NOC) said the shutdown was directly ordered by Haftar's forces.

On Sunday, NOC said the major southwestern fields of El Sharara and El Feel were closing after forces loyal to Haftar shut a pipeline.

The closures will cut Libya's oil output to 72,000 barrels a day from 1.2 million barrels a day in just a few days' time unless the blockages are lifted, the NOC said.

Any lasting closure could hit Tripoli hard since the government relies on oil revenues to fund its budget.

UN Secretary General Antonio Guterres said he was very worried about the closure. German Foreign Minister Heiko Maas said Serraj and Haftar had "in general" agreed to solve the output blockage, without giving a time frame.

United States Secretary of State Mike Pompeo told reporters that progress had been made towards reaching a full-fledged ceasefire in Libya's war, adding that he hoped Libyan oil facilities would reopen as a result of the talks.

The east under Haftar has tried to export oil, bypassing the NOC, to gain a greater share of oil revenues. 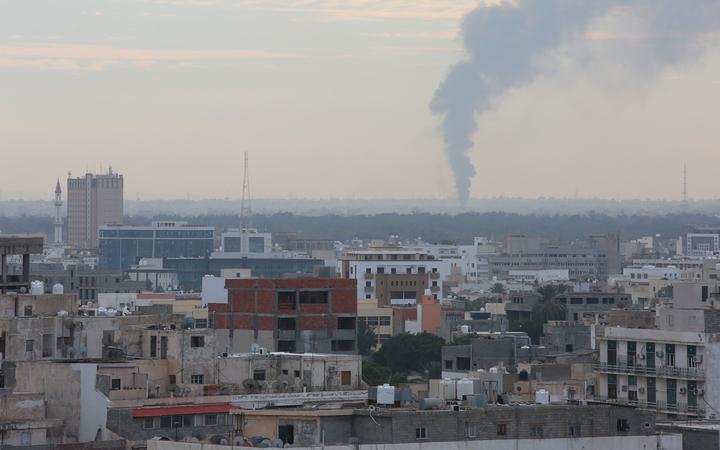 Western nations on sideline as Russia, Turkey and Arab states take the lead

A call for a ceasefire from Russia and Turkey helped reduce fighting a week ago, Russian President Vladimir Putin said, ahead of a meeting with Turkish counterpart Tayyip Erdogan on the sidelines of the conference.

"We don't lose hope that dialogue will continue and the conflict will be solved," Putin said.

Italian Foreign Minister Luigi Di Maio called the summit a "point of departure" for achieving a ceasefire and blocking a flow of arms into Libya that has accelerated with Haftar's offensive.

Italy, the former colonial power, has a particular interest in Libyan security as the main destination of hundreds of thousands of African migrants sent across the Mediterranean by smugglers until a sharp downturn in flows in 2017.

But since the NATO bombing campaign that helped overthrow Gaddafi, Western countries have stepped back from playing a decisive role in Libya, allowing Russia, Turkey and Arab states to take the lead as outside powers with the most clout.

Pompeo and European and Arab leaders attended the summit, and Haftar's forces published pictures of him meeting Merkel and French President Emmanuel Macron. United Arab Emirates Foreign Minister Anwar Gargash tweeted on Sunday night that the UAE supported efforts by the Berlin conference to seek a political solution to the crisis in Libya.

Both Serraj and Haftar met Merkel on different occasions. Serraj could be also seen hugging Erdogan, while Macron and Haftar were both seen smiling in pictures when they met in a corridor. 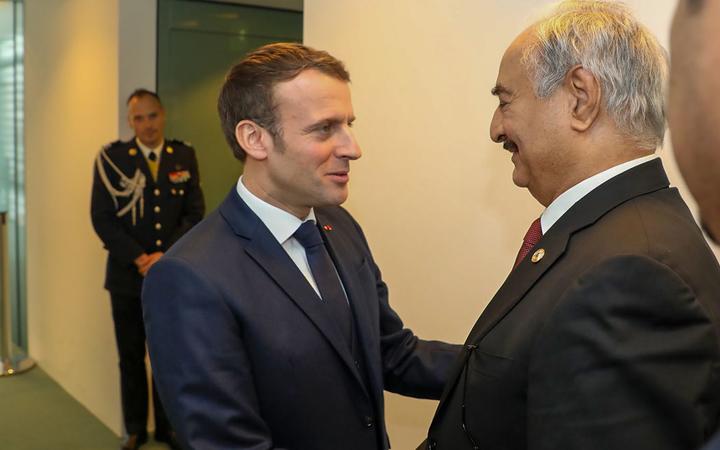