Turkish President Recep Tayyip Erdogan and his Russian counterpart Vladimir Putin have called for a ceasefire to end the conflict in Libya. 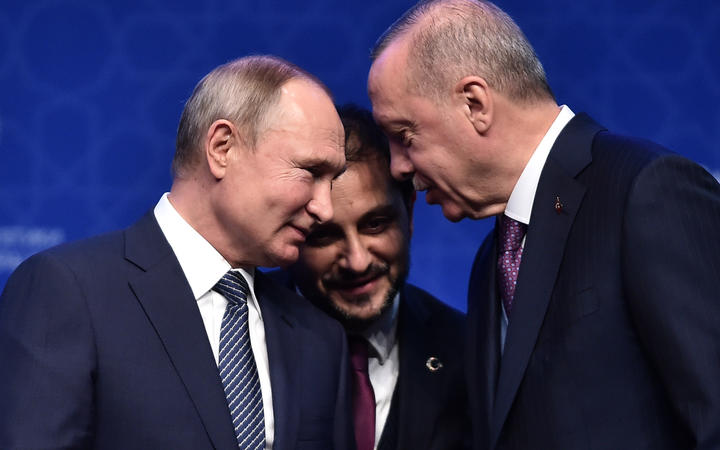 The two leaders are seen to back rival sides in a conflict dragging in an increasing number of states.

After talks in Istanbul, Mr Erdogan and Mr Putin said the ceasefire should come into force at midnight on Sunday.

The call came amid a warning by German Foreign Minister Heiko Maas of a Syrian-style civil war in Libya.

Libya is strategically important, having the largest oil reserves in Africa. It is located along the Mediterranean coast, and a gateway to Europe for African migrants. Previous efforts to end hostilities and unite the nation have failed, and it is unclear whether the latest initiative will succeed.

Gen Haftar's Libyan National Army (LNA) said on Monday that its forces had captured the coastal city of Sirte, which is near Libya's "oil crescent". There have also been reports of clashes and air strikes on the road between Sirte and the city of Misrata, which is controlled by troops loyal to the UN-backed government.

In another sign of the diplomatic push for a ceasefire, Italian Prime Minister Giuseppe Conte met Gen Haftar in the Italian city of Milan.

He was due to meet Libya's UN-backed Prime Minister Fayez al-Serraj later on Wednesday, an Italian government source was quoted by Reuters news agency as saying.

Mr Serraj was earlier in the European Union (EU) capital, Brussels, for talks with Mr Maas and EU officials.

"We want to avoid Libya becoming the scene of proxy wars," Mr Maas said. "Libya cannot become a second Syria and so we need rapidly to enter a political process, an agreement on an effective ceasefire and an arms embargo," he added.

Mr Serraj has the backing of Turkey, the Qatar and most Western powers, while Gen Haftar's key allies are Egypt, Saudi Arabia, the United Arab Emirates, Jordan and Russia. Gen Haftar's forces have also waged a months-long offensive to capture the capital, Tripoli, but have so far failed to take it.

Libya first descended into conflict after the overthrow and killing of long-serving ruler Muammar Gaddafi in 2011, as rival faction jostled for power.