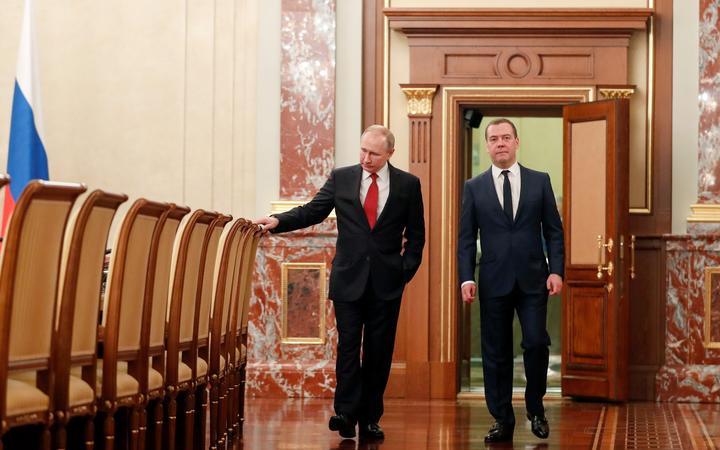 It came after Russian Prime Minister Dmitry Medvedev said his government was resigning to give Putin room to carry out changes to the constitution.

The unexpected resignation, which came shortly after Putin proposed a nationwide vote on sweeping changes that would shift power from the presidency to parliament, mean Russia would also get a new prime minister.

Medvedev, a long-time Putin ally and former president, made the announcement on state TV, sitting next to Putin who said Medvedev would take on a new job as deputy head of Russia's Security Council.

Vladimir Putin asked for the outgoing government to remain at work until a new government was appointed.

Other candidates for the Prime Minister position included Moscow Mayor Sergei Sobyanin, who is credited with breathing new life into the capital.

Wednesday's changes will be seen by many as the start of Putin's preparations for his own political future when he leaves the presidency in 2024.

In power in one of the two roles since 1999, Putin is due to step down in 2024, when his fourth presidential term ends.

He has not yet said what he plans to do when his term expires but, under the current constitution which sets a maximum of two successive terms, Putin is barred from immediately running again.

Putin told Russia's political elite in his annual state-of-the-nation speech that he favoured changing the constitution to hand the State Duma, the lower house of parliament, the power to choose the prime minister and other key positions.

"These are very serious changes to the political system," Putin said.

"It would increase the role and significance of the country's parliament ... of parliamentary parties, and the independence and responsibility of the prime minister."

Critics have long accused him of plotting to stay on in some capacity to wield power over the world's largest nation after he steps down. He remains popular with many Russians who see him as a welcome source of stability even as others complain that he has been in power for too long.

Medvedev's resignation took Russian markets taken by surprise. The rouble and stocks suffered sharp losses before rebounding to make gains amid the uncertainty.

"In a nutshell, we take this announcement as an attempt by Putin to shake up Russia's polity and refocus the administration on implementing the president's well-telegraphed but slowly progressing public spending program," Citi said in a note.

Against the euro, the rouble briefly dropped to 68.86 but soon pared losses to trade at 68.49.