Former Nissan boss Carlos Ghosn has said the decision to flee Japan, where he was charged with financial misconduct, was the most difficult of his life. 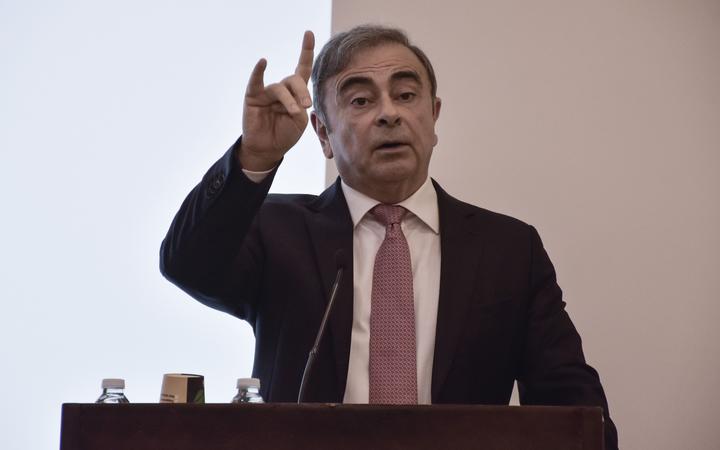 Speaking at a highly anticipated news conference, Ghosn described himself as a "hostage" in the country with a choice between dying there or running.

He claimed prosecutors had tried to break his spirit by barring any contact with his wife, Carole.

He fled to Lebanon on 29 December.

The former Nissan and Renault executive told a room packed with journalists from across the globe his treatment in Japan failed to meet international standards of justice.

In prison, Ghosn said he was kept in a cell with a small window and only allowed to shower twice a week. He also claimed to have spent 130 days in a windowless cell while in solitary confinement.

Ghosn said he was interrogated for up to eight hours a day without having any lawyers present and described his "feeling of hopelessness" as "profound".

"I was brutally taken from my work as I knew it, ripped from my work, my family and my friends," he said.

It is the first time Ghosn has spoken publicly since he fled house arrest in Japan. He did not give details of his dramatic escape, despite widespread speculation over how he managed to leave the country undetected and reports that it involved hiding in a musical instrument case. He said providing more information would compromise people who had helped him.

Instead he expressed his "profound appreciation to be able to be reunited with my family and loved ones."

In a statement released after the press conference, prosecutors in Japan said Ghosn's allegations "completely ignore his own conduct, and his one-sided criticism of the Japanese criminal justice system is totally unacceptable".

Ghosn "only has himself to blame for being arrested and detained" it said.

Prosecutors alleged that Ghosn made a multimillion-dollar payment to a Nissan distributor in Oman. Nissan, meanwhile, has filed its own criminal complaint against Ghosn, accusing him of diverting money from the company for his own personal enrichment.

He is also accused of under-reporting his own salary.

Ghosn insists that he is innocent of all charges made against him.

Ghosn's lawyers had told him it would be five years before he could expect a judgement in the case, he said.

He came under pressure to admit to the alleged crimes, he said, to bring the matter to a close.

"'It will get worse for you if you don't just confess,' the prosecutor told me repeatedly," he said at the news conference.

He said the conviction rate in Japan, which is over 99 percent, had led him to believe he would not get a fair trial.

As a result, he claimed it was not hard to come to the decision that he would either have to "die in Japan or ... get out".

Ghosn believes he is the victim of a plot between Nissan and the Japanese judiciary. He alleges they wished to oust him from his role at the top of Nissan over concerns about Renault's growing influence.

In 1999, he helped mastermind a deal that saw Renault rescue Nissan from the brink of bankruptcy.

"Some of my Japanese friends thought that the only way to get rid of the influence of Renault on Nissan, was to get rid of me," he said.

Responding to a question from the BBC, Ghosn said he did not believe the plot went as high as Japanese prime minister Shinzo Abe.

On Tuesday, Japanese authorities issued a warrant for the arrest of Ghosn's wife Carole, who was accused of giving false testimony.

Ghosn was arrested initially in November 2018. He was subsequently released on bail and put under house arrest, but he was banned from seeing his wife.

Then, in the final days of 2019, he skipped bail to board a private jet that took him to Turkey before he travelled on to Lebanon, where he is a citizen, and where his wife was waiting.