As bushfires continue to sweep across Australia, Parris Goebel, Nicole Kidman and P!nk are among celebrities who have donated to the NSW Rural Fire Service. 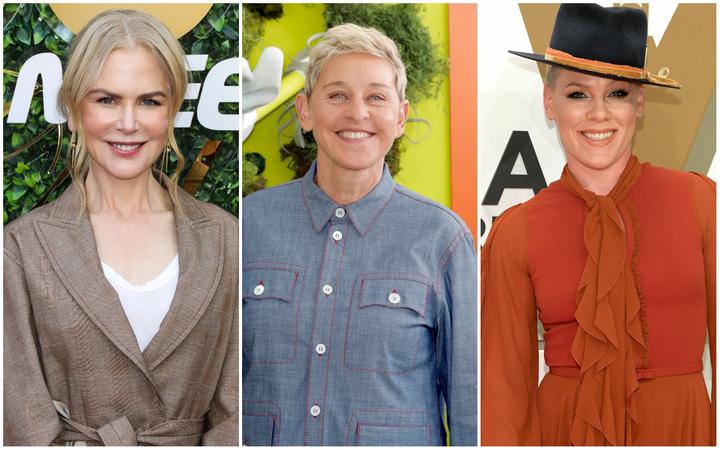 Nicole Kidman,Ellen DeGeneres and P!nk are among those who have donated to the NSW Rural Fire Service. Photo: RNZ / AFP

Bush fires in Australia continue to rage out of control, with temperatures spiking into the 40Cs over the weekend as thousands of firefighters battled blazes across the country.

Authorities say although there were cooler temperatures and light rain yesterday, it will barely give firefighters the chance to 'take a breath'.

More than 1300 homes have been destroyed and millions of hectares of land scorched in the fires.

New Zealand choreographer Parris Goebel, who was recently made a Member of the New Zealand Order of Merit, has donated $20 to the Australian Red Cross for every person who shared her post about the bushfires on Instagram. She also made a donation to the NSW Rural Fire Service.

"As I sit in the peace and safety of my room here in NZ I can't help but feel for all the families fleeing their homes, fire fighters sacrificing their lives and animals dying because of these horrific Bush fires!

"Let's raise awareness and do our part," she wrote.

Goebel said that she wasn't seeing any of her friends post about the fires on Instagram and she hoped shared images would bring some awareness to what was happening.

P!nk has donated $500,000 directly to the local fire services battling blazes on the frontlines. On Instagram the singer wrote that her heart goes out to friends and family in Australia.

"I am totally devastated watching what is happening in Australia right now with the horrific bushfires."

Both P!nk and singer Lizzo were among a long list of celebrities that have shared a list of Australian fire services people can make donations to.

"Our family's support, thoughts and prayers are with everyone affected by the fires all over Australia," Kidman wrote on Instagram.

US Weekly magazine reports that Kidman was visibly upset at a Golden Globes party after learning her country home, which she shares with Urban, was under threat.

Ellen DeGeneres said she has donated to the Red Cross, and Australian Wildlife fund and the NSW Rural Fire Service.

"It's almost impossible to understand the size and destruction of the fires in Australia," she tweeted.

Australian tennis player Ash Barty is promising to donate any prize money she earns from the Brisbane International to the firefighting efforts.

Meanwhile Australian comedian Celeste Barber has raised $32,160,166 so far via a Facebook fundraiser she set up for the NSW Rural Fire Service and Brigades Donations Fund. Barber's mother in law was told to evacuate last night.

Actors Nick Kroll and Joel Edgerton are among other celebrities fundraising for the NSW Rural Fire Service on social media.

Absolutely devastated by the fires in Australia. Praying for everyone affected and all of the first responders. I’m making a donation and would love if you would consider doing the same if you can. Swipe up ❤️ https://t.co/aEqW5SPKPG

Thousands of animals have perished in the bushfires and Steve Irwin's family has helped to rescue animals where they can. The family own and operate the Australia Zoo's Wildlife Hospital.

Our @AustraliaZoo Wildlife Hospital takes in animals from all over Australia. Hundreds of grey-headed flying foxes, a species listed as vulnerable, have been flown to Queensland after the rescue centre they were recovering in was at risk from fire and evacuated. Some of the orphans are now being cared for by the team at the hospital until they’re big enough to go home, and there’s no threat of fire. In September, flying fox admissions to the hospital skyrocketed by over 750% due to drought conditions and lack of food. Flying foxes are now being drastically affected by wildfires and we’re again seeing an influx of these beautiful animals from across the country. This week, we treated our 90,000th patient. To cope with so many animals being admitted to the hospital, in 2019 we opened a sea turtle rehabilitation centre, sea snake ward and are about to complete a new bird recovery area, but it’s still not enough to keep up. We need to build a new ward for our patients. Wildlife Warriors from around the world are asking how they can help us save native wildlife, you can donate on our website www.wildlifewarriors.org , or support our fundraiser to start construction of our newest ward by visiting the link in my bio!

A few of the faces affected by Australia’s devastating bushfires... these orphaned fruit bats are in treatment at our wildlife hospital after being transported from NSW. Thank you for your comments and concerns about the zoo during Australia’s severe bushfire season, and how to help wildlife in the fires - Australia Zoo and our team have not been affected, but if you do want to help our efforts treating animals rescued from fire, you can donate to our non-profit ‘Wildlife Warriors’ and our hospital at the link in my bio.