The haze over Auckland city from the bushfires in Australia is starting to lift. 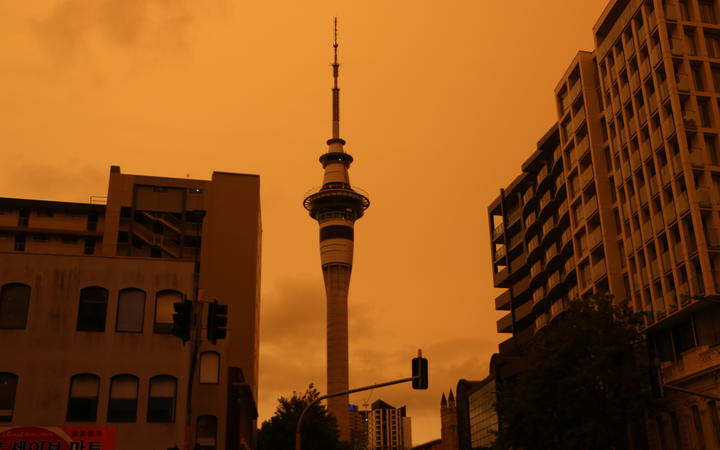 The plume of smoke, pushed by a strong north-westerly wind, started to drift over the city at about 2pm today.

Auckland police this afternoon said they were receiving a high number of calls and asked residents not to call the 111 emergency line to report the orange haze caused by the fires.

They said although the sky may be causing concern, it was not a police emergency.

The Transport Agency warned holiday makers returning home to and from Auckland to drive safely, and not be distracted by the orange sky.

An agency spokesperson this afternoon said the sky was a lot darker than usual for that time, and suggested drivers turn their lights on and stay focused on the road to avoid any accidents. 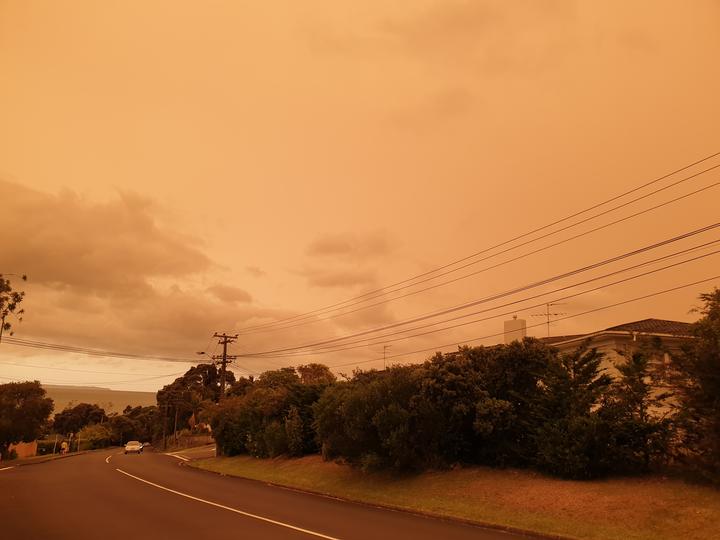 The haze in the Auckland suburb of Browns Bay. Photo: RNZ / Gill Bonnet

Gill Bonnett, an RNZ reporter based in Browns Bay, this afternoon said cars had already turned on their headlights.

"The birds are acting as if it's night-time ... you can see a different sort of light, this sort of sepia, one of the traffic lights in the distance that was green looked almost blue."

MetService said a large plume of smoke had been blown across the Tasman by a strong north-west wind and it is expected to continue drifting across the North Island until later tonight.

The forecaster said the smoke may also be visible in the south but would be denser over the North Island. 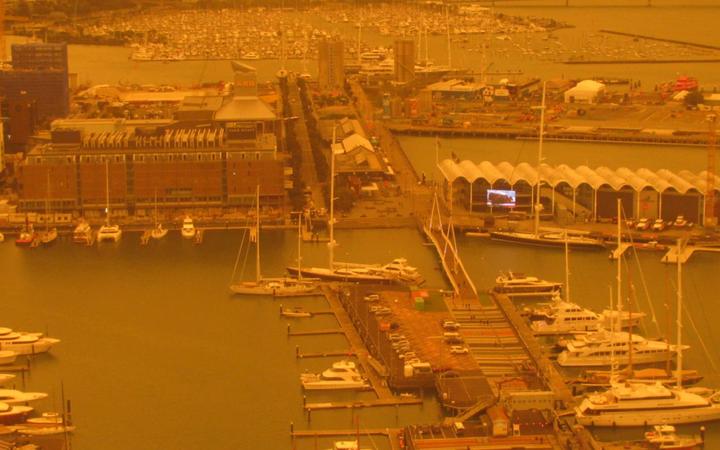 A screenshot of Auckland's Viaduct Harbour taken from a central web camera at around 3pm this afternoon. Photo: Screenshot/ MetService

On social media, Aucklanders described the haze as weird and eerie.

MetService said a south-west wind coming in behind will start diverting the smoke back over the Tasman Sea.

Skies will be starting to turn orange in the North Island as bushfire smoke moves across. ^Tahlia pic.twitter.com/DJ6VTNklBp

Smoke from the fires currently raging in several states of Australia covered parts of the South Island on New Year's Day, including Fox Glacier which received a dusting of ash.

The following day the smoke also affected skies in the North Island. 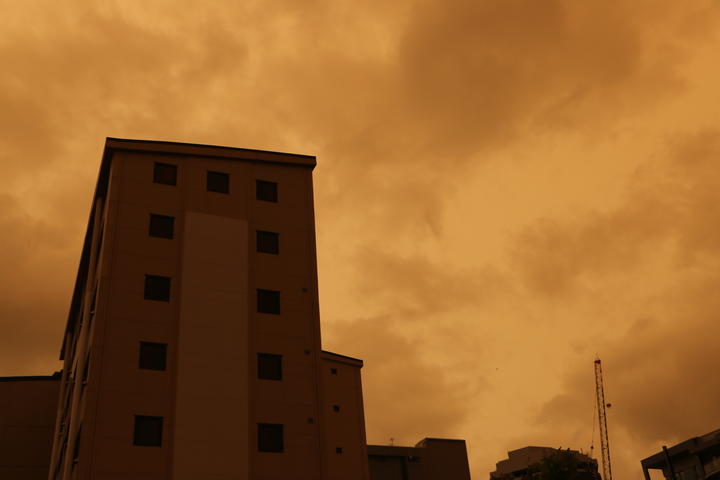 Smoke haze from the Australian bushfires is evident in this picture taken from RNZ's Auckland office. Photo: RNZ / Katie Doyle

Earlier MetService forecaster, Sonja Farmer, predicted that today's smoke would not be as thick as previous plumes.

"This time it's fairly fast-moving in comparison and it's followed by south-westerlies coming in behind as the front goes through, so there will be some smoke around but it may not be around for too long because the other wind is coming behind.

"The other south-west flow will start diverting it back into the Tasman."

By mid-morning, MetService tweeted that the smoke was "making haste across the Tasman, driven by an upper level jet of westerly winds".

Niwa said the densest portion of the smoke will move over the North Island.

Look for smoke to once again appear in NZ's skies on Sunday.

Unlike a couple of days ago, however, this time the densest portion of the plume is expected to move over the North Island. pic.twitter.com/BOGhGYgvNi

Asthma sufferers urged to be prepared

The Ministry of Health says smoke from the Australian fires will not impact the air we breathe in New Zealand.

The government and Auckland Council have reviewed the air quality to assess the impact of the Australian bushfire smoke which is visible in parts of the country today.

A Ministry of Health spokesperson said data shows that the smoke is in the upper atmosphere and it's much more diluted at ground level and Auckland Council agrees.

They said any intermittent, short-term increase in smoke is unlikely to cause any significant health issues.

But they said some people may still experience ill effects even though the pollution levels remain relatively low.

People who are more at risk include pregnant women, babies and children, those who suffer from asthma or other respiratory conditions, older people or those with chronic illnesses.

If people are concerned they are advised to remain indoors or see their GP if experiencing any breathing difficulty.

Asthmatic New Zealanders concerned about the smoke's impact are being told to check their inhalers and see their GP.

A lot of people in town just looking up at the sky right now pic.twitter.com/mOja5Wkr5h

Asthma and Respiratory Foundation NZ has seen a spike in inquiries around the safety of smoke and what it means for breathing as the Australian fires continue to bring plumes of smoke to this country.

Chief executive Letitia Harding said she hasn't had any reports of people suffering from the smoke but said it's an opportunity to top up inhalers and be prepared.

"To check that their inhalers are full and not empty and also they're not expired.

"And just to be really aware of any tightness in the chest or shortness of breath. Any smokier conditions will exacerbate symptoms," Harding said. 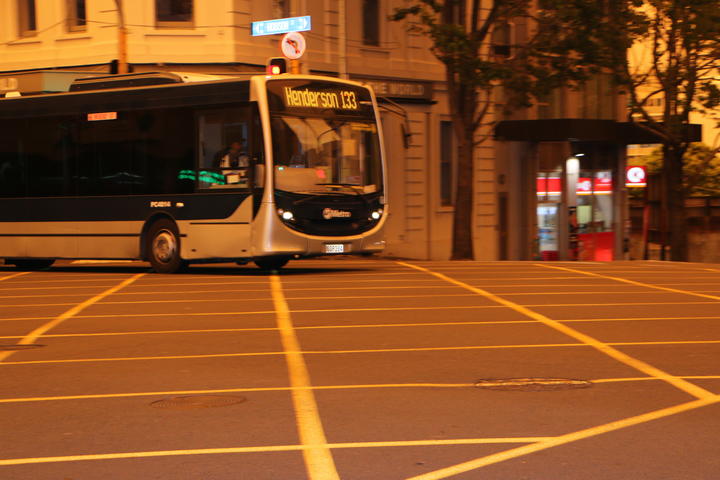 An Auckland bus with its lights on during the day as an orange haze from Australia's bushfires hangs over the city. Photo: RNZ / Katie Doyle

Strong winds spreading up the country

West to southwest gales gusting to 120 km/hr are forecast for coastal Southland and Clutha, and for Stewart Island. Gale or severe gale northwest winds gusting to 120km/hr are expected ahead of a front moving up the country today. https://t.co/Sd5C6lrsSL ^Tahlia pic.twitter.com/Mz5NHhv0DR

The winds are already being felt in parts of the South Island, it says, and will affect inland parts of Canterbury and exposed parts of the North island's east coast south of Hastings later today.

Strong winds battering parts of the country today, have the potential to damage trees, powerlines and make driving hazardous.

MetService says a deep low lies to the south of the country and it is moving north across southern and central New Zealand.

"Lower parts of the North Island including Tararua district, Hawke's Bay south of Napier, Wellington, Wairarapa. We're expecting to see some gales up to 120km/h, that's until tonight."

Miller said it would be dangerous on the roads in many areas for motorcyclists and high-sided vehicles over the next few days.

starting to pick up across the South Island as a front approaches. Warnings and watches for strong winds are in place, to see if you're affected head to https://t.co/qHyE5zySvx^Tahlia pic.twitter.com/JWS7XkaNFp

Temperatures are expected to be much cooler than usual for this time of year today with Dunedin, Queenstown and Timaru reaching just 11 degrees Celsius.