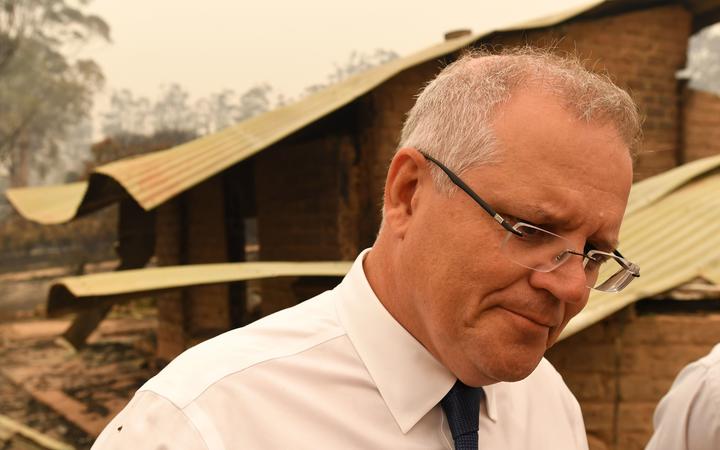 Australia's Prime Minister Scott Morrison says people are hurting from the devastation caused by bushfires and he needs to stay focused on providing resources and support. Photo: AFP

The Navy's largest amphibious ship, HMAS Adelaide, will sail from Sydney this afternoon to sit off the east coast should it be required to help with evacuations.

It's the first time in Australia's history that reservists have faced a compulsory call-out, Defence Minister Linda Reynolds said.

Reynolds said the reservists will have four key responsibilities: Provide isolated communities with life-saving supplies for immediate relief; provide evacuation to vulnerable people in isolated communities; assist with assessment and reopening of vital roads; assist fire services with preparation of fire breaks away from the fire fronts themselves.

Reynolds said any reservists currently engaged in fighting fires will be exempt, as will those whose own properties or families are at risk from the fires.

Morrison said HMAS Adelaide will join the HMAS Choules and MV Sycamore in efforts to evacuate people from fire-affected communities.

"The Adelaide is fully equipped for disaster relief and humanitarian aid, is able to operate helicopters, 400 crew, including medical staff, as well as 300 tonnes which have been loaded up in recent days of emergency relief supplies."

Morrison and Reynolds were addressing media after a meeting of the National Security Committee of Cabinet in the wake of widespread criticism of the government's handling of the bushfire crisis.

Morrison has responded to criticism of his leadership during the bushfire crisis, saying while he understands people are angry, he doesn't "take these things personally".

Australia's leader has become global news, with international media outlets broadcasting vision of his confrontational meeting with angry residents in the bushfire-ravaged New South Wales town of Cobargo on Thursday.

What was supposed to be an opportunity for the public to see Morrison meeting emergency leaders and comforting bushfire victims quickly took a turn when people heckled the prime minister and refused to shake his hand during the brief visit.

Footage of Morrison grabbing Zoey Salucci McDermott's hand after she refused his handshake is being shared widely on social media.

"I'm only shaking your hand if you give more funding to our RFS," she says in the video.

Salucci McDermott said she was "heartbroken" following the exchange.

"I have lost everything I own," she said on Facebook.

"My house is burnt to the ground and the Prime Minister turned his back on me."

But at a press conference in the Victorian town of Bairnsdale yesterday, Morrison said he had not taken the criticism personally.

"People are angry, I understand it," he said.

"And we will continue to stay focused on exerting all of our effort to deliver all of the resources and all of the support to ensure that all of these communities can come through." 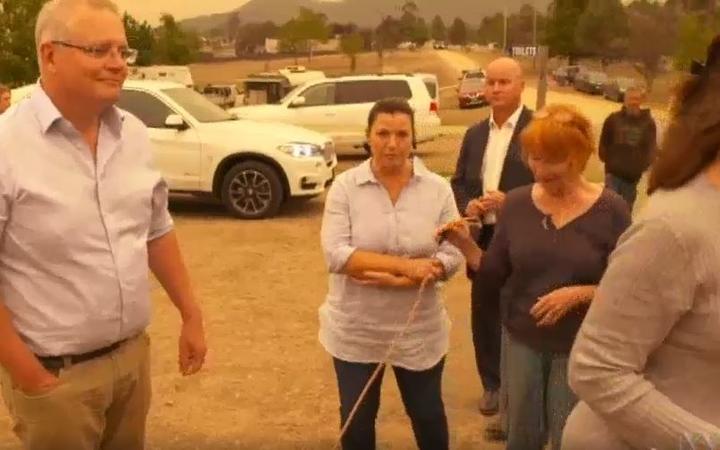 Scott Morrison says he is not taking insults and snubs from Cobargo residents personally after his visit to the bushfire-affected town was cut short when residents confronted him. Photo: Screengrab / ABC

'My job is to stay focused'

During an earlier press conference, the prime minister was repeatedly asked whether he believed people were angry at the losses they had suffered, or his leadership.

"People are angry, and if people want to direct that at me, that is up to them," he said.

"It is something that I understand. It's not something for me to take personally.

"My job is to stay focused on ensuring that we have the maximum coordination of effort across many states."

Morrison was also questioned about comments made by former NSW fire chief Greg Mullins, who compared the prime minister's leadership during the bushfire crisis and his stance on climate change to the way the US President Donald Trump has handled the epidemic of mass shootings across America.

"I'm pretty angry about the Prime Minister's response. It reminds me of President Trump when there's multiple shootings, saying, 'It's nothing to do with guns' - he won't talk about guns," Mullins said on ABC radio this morning.

But Morrison dismissed the comments.

"I just remain focused on the job I have to do," he said.

"This is not about any one individual - not me or anyone else. We all have to a job to do." 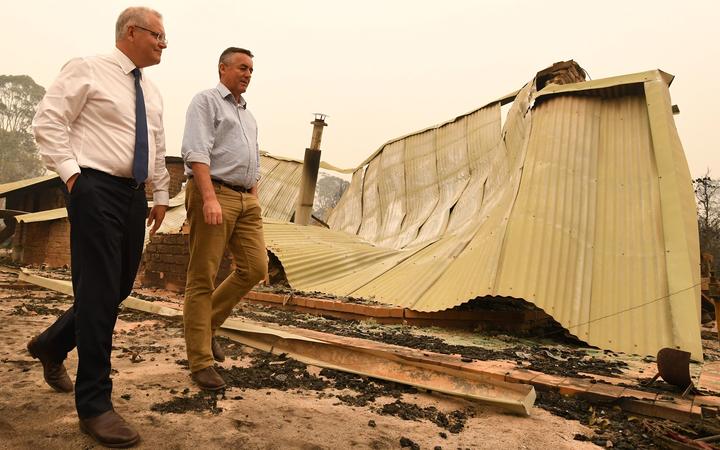 Just a few hours after saying it was "still the plan" to go to India later this month to discuss the global economy, Morrison said he was now "inclined not to proceed" with the trip.

It now appears the trip has been postponed, according to a press release issued yesterday by India's Ministry of External Affairs.

It said Indian Prime Minister Narendra Modi "looked forward" to welcoming Morrison at "a mutually convenient time later in the year", without elaborating on when exactly that would be.

Restarting negotiations about a bilateral free-trade deal and strengthening defence ties were both on the agenda for the trip.

Morrison was due to travel to India on 13 January, before heading on to Japan.