At least 120 houses have been destroyed by fast moving forest fires in the Chilean city of Valparaíso, prompting a mass evacuation. 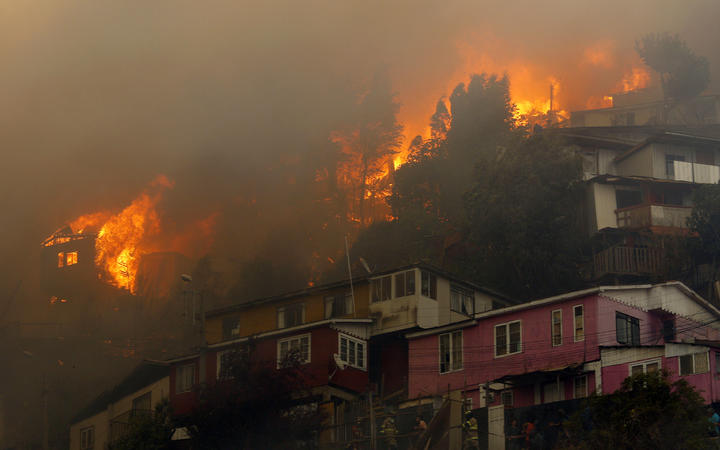 All the city's firefighters have been deployed to tackle the fires in the Rocuant and San Roque areas.

Power was cut to about 90,000 customers in the area as a precautionary measure.

Valparaíso Mayor Jorge Sharp told Canal 24 Horas that the fires had been started "intentionally". There have been no reports of any casualties.

"At the moment, emergency teams from all over Valparaíso are working, using land and air resources, in two areas in the higher part of the city," the mayor said.

He said strong winds and high temperatures were exacerbating the situation. Valparaíso is one of Chile's largest cities and a major port on the Pacific.

Chilean Agriculture Minister Antonio Walker later arrived in the area. He said the firefighters were struggling to contain the fires.

Nearly 120 hectares of grassland have already been ravaged by the fires.

Valparaíso, in central Chile, is a popular tourist destination in South America.

Are forest fires worse than in previous years?

Wildfires have been raging in many parts of the world this year, including Brazil, Indonesia and the Arctic.

In Australia, nine people have been killed and hundreds of homes have been destroyed by bushfires since September. The scale of the fires there and elsewhere has raised questions as to whether the fires can be linked to climate change.

The science around climate change is complex - it's not the cause of bushfires but scientists have long warned that a hotter, drier climate would contribute to fires becoming more frequent and more intense.