Security forces fired tear gas and rubber bullets at Lebanese protesters in central Beirut in clashes that went on into the night and wounded dozens of people. 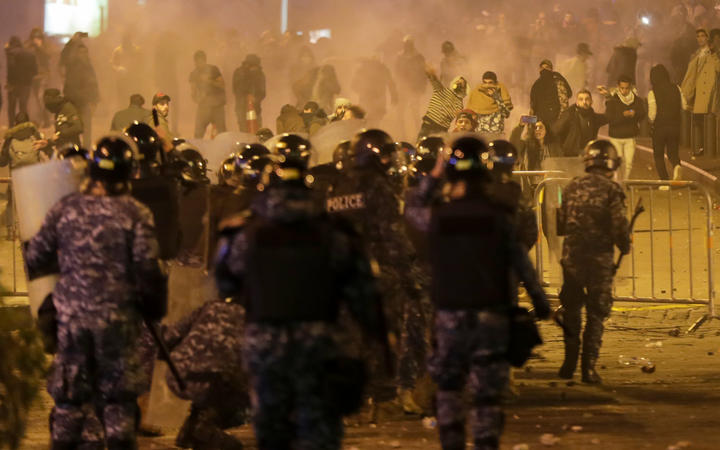 Hundreds of people had been marching in the capital as part of a historic wave of protests that has swept Lebanon since 17 October, furious at a ruling elite that steered the country towards its worst economic crisis in decades.

Since the protests pushed Saad al-Hariri to resign as prime minister, talks between the main parties have been deadlocked for weeks over forming a new cabinet.

Lebanon urgently needs a new government to pull it out of the crisis. Foreign donors say they will only help after the country gets a cabinet that can enact reforms.

Riot police and security forces deployed en masse in Beirut on Saturday night, chasing demonstrators, beating and detaining some of them, a Reuters witness and a protester said.

Plumes of white smoke billowed from tear gas canisters and ambulance sirens rang out as the two sides raced around the streets of central Beirut in cat-and-mouse clashes late into the night.

Protesters pelted stones at police and others tried to push through steel barriers blocking paths to the parliament and government headquarters.

The Internal Security Forces said at least 20 police were wounded.

The unrest erupted in October from a build-up of anger at the rising cost of living, new tax plans and the record of sectarian leaders dominating the country since its 1975-90 civil war. Protesters accuse the political class of milking the state for their own benefit through networks of patronage.

Lebanon's economic crisis, long in the making, has now come to a head: Pressure has piled on the pegged Lebanese pound. A hard currency crunch has left many importers unable to bring in goods, and banks have restricted dollar withdrawals.