Qantas passengers have used emergency slides to evacuate a plane that filled with smoke shortly after it was grounded by a "hydraulic issue" at Sydney Airport. 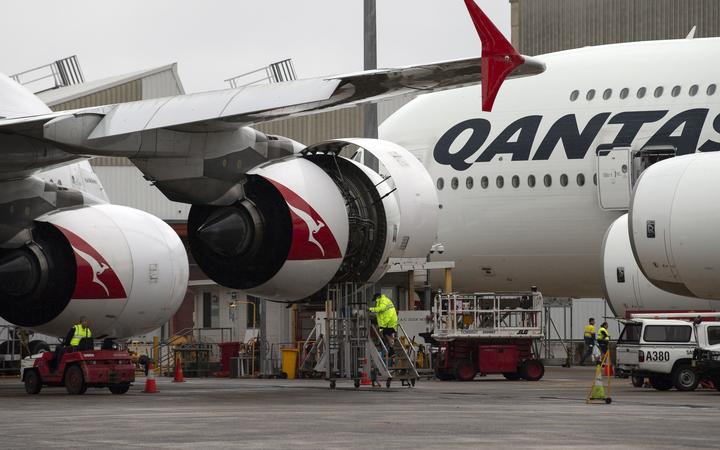 Passengers say the plane was stuck on the tarmac after landing when smoke began to fill the cabin. Photo: AFP

The Sydney to Perth flight, which carries up to 271 passengers, departed just after 10am today.

About 30 minutes into the flight, the captain announced the plane had to turn around due to mid-flight hydraulic issues.

Passengers told the ABC the plane was stuck on the tarmac after landing when the smoke began to fill the cabin.

"We were on the runway waiting to be towed in and we started to smell burning," Dillon Parker, who is holidaying in Australia from Scotland, said.

Passenger Ally Kemp, who was on the last leg of a trip to Perth after spending six months studying overseas, said the scene was "terrifying".

"When we got back to the gate, the cabin started to fill with smoke and basically the captain started screaming 'Evacuate!'" the 20-year-old said.

"It took a few seconds to sink in and then basically it was a mad scurry to go down the slides and get off the plane which was just crazy."

Ms Kemp hoped to get on another flight soon.

Just had to evacuate my flight to Perth after engineering issues. Everyone had to exit the plane via slide onto Sydney tarmac after the cabin filled with smoke and the captain screamed evacuate. Terrifying.

Most people in economy had to go down slides. There was evacuate going off throughout the plane.

In a statement, Qantas said engineers were inspecting the aircraft after the evacuation.

"Once back at the gate, the captain made the decision to evacuate the aircraft as a precaution and three emergency slides were deployed," it said.

NSW Ambulance said "all patients had been evacuated" with one passenger being taken to Royal Prince Alfred for "minor injuries".