UN climate talks appear to be in trouble as they head into extra time. 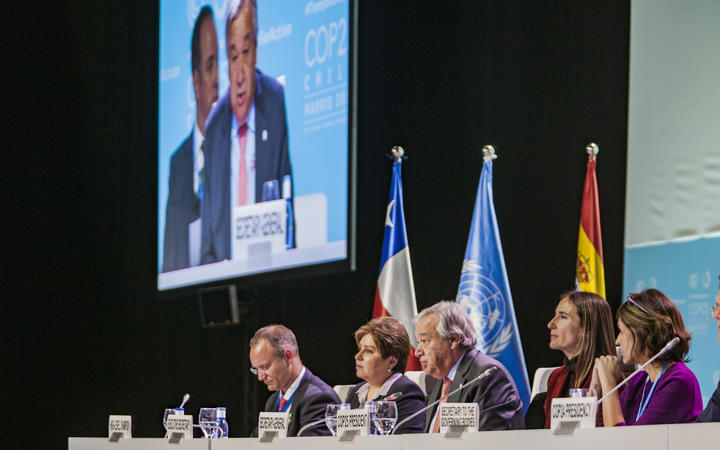 Fault lines have re-appeared between different negotiating blocs, with one delegate describing a new draft text as "totally unacceptable".

Alden Meyer, from the Union of Concerned Scientists said the situation in Madrid was unprecedented since climate negotiations began in 1991.

Negotiators are working towards a deal that would see countries commit to make new climate pledges by the end of 2020.

Saturday saw the release of a new draft text from the meeting, designed to chart a way forward for the parties to the Paris agreement.

The Paris pact came into being in 2015, with the intention of keeping the global average temperature to well below 2C. This was regarded at the time as the threshold for dangerous global warming, though scientists subsequently shifted the definition of the "safe" limit to a rise of 1.5C above pre-industrial levels.

But Mr Meyer commented: "The latest version of the Paris Agreement decision text put forward by the Chilean presidency is totally unacceptable. It has no call for countries to enhance the ambition of their emissions reduction commitments.

"If world leaders fail to increase ambition in the lead up to next year's climate summit in Glasgow, they will make the task of meeting the Paris Agreement's well below 2C temperature limitation goal - much less the 1.5 degrees Celsius goal - almost impossible."

Hi view was echoed by David Waskow, international climate director for the World Resources Institute (WRI). "If this text is accepted, the low ambition coalition will have won the day," he said.

The conference in the Spanish capital has become enmeshed in deep, technical arguments about a number of issues including the role of carbon markets and the financing of loss and damage caused by rising temperatures.

Responding to the messages from science and from climate strikers, the countries running this 26th conference of the parties (COP) meeting are keen to have a final decision here that would see countries put new, ambitious plans to cut carbon on the table. 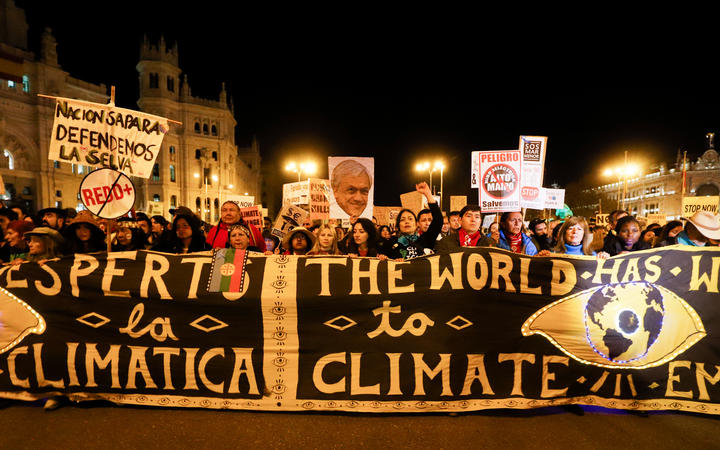 Demonstrators take part in the climate march on the fringes of the world climate conference. Photo: AFP

According to the UN, 84 countries have promised to enhance their national plans by the end of next year. Some 73 have said they will set a long-term target of net zero by the middle of the century.

But earlier in the meeting, negotiators from the Alliance of Small Island States (AOSIS) pointed the finger of blame at countries including Australia, the United States, Canada, Russia, India, China and Brazil.

They had failed to submit revised plans that would help the world keep the rise in global temperatures under 1.5C this century.

At a "stock-taking" session on Saturday morning, Tina Stege, a negotiator with the Marshall Islands delegation, said: "I need to go home and look my kids in the eye and tell them we came out with an outcome that will ensure their future."

She added: "The text must address need for new and more ambitious NDCs and long-term goals. We can't leave with anything else."

Reinforcing the sense of division, India, supported by China, Saudi Arabia and Brazil, has been taking a hard line on promises made by richer countries in previous agreements before the Paris pact was signed in 2015.

The deal saw every country, India included, sign up to take actions.

This was a key concession to the richer nations who insisted that the deal would only work if everyone pledged to cut carbon, unlike previous agreements in which only the better off had to limit their CO2.

But India now wants to see evidence that in the years up to 2020, the developed world has lived up to past promises.

For many delegates, the deadlock is intensely frustrating in light of the urgent need to tackle emissions.

"I've been attending these climate negotiations since they first started in 1991. But never have I seen the almost total disconnect we've seen here at COP25 in Madrid between what the science requires and the people of the world demand, and what the climate negotiations are delivering in terms of meaningful action," said Alden Meyer.

"The planet is on fire and our window of escape is getting harder and harder to reach the longer we wait to act. Ministers here in Madrid must strengthen the final decision text, to respond to the mounting impacts of climate change that are devastating both communities and ecosystems all over the world."

"The mute majority must step up, and ramp up, their commitments to tackle the growing climate crisis well ahead of the COP26 gathering."

New Zealand's Climate Change Minister James Shaw said he was disappointed nothing was likely to come from Summit.

Shaw is travelling back from the Madrid, where he led tense negotiations.

He says a small set of countries had held things up, and major economies had resisted calls for bolder climate commitments.

Shaw said the resulting failure would hurt the Pacific Islands the most.