Colombia's President Iván Duque has said security forces will remain on the streets to maintain order, as protests continued for a third day. 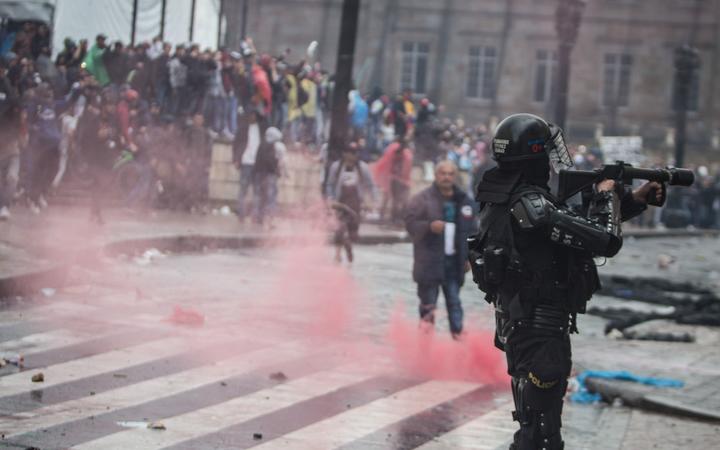 Troops and police are carrying out joint patrols as unrest continues on the streets of Bogotá, the capital of Colombia. Photo: AFP

The anti-government demonstrations erupted on Thursday, when more than 250,000 marched in a national strike.

They started peacefully but clashes between protesters and police have since broken out, and there have been reports of vandalism and looting.

"We express the total and absolute rejection of all Colombians for the vandalism, for the terrorism, for the looting," Mr Duque said.

At least three people have died since the protests against corruption and possible austerity measures began.

A curfew was imposed in the capital, Bogotá, on Friday, but it did not deter protesters from returning to the streets a day later.

When protests resumed on Saturday, police used tear gas to disperse hundreds of people who had gathered near Bogotá's National Park, reports said.

Demonstrators also gathered outside of congress in Bolivar Plaza, near the presidential palace. 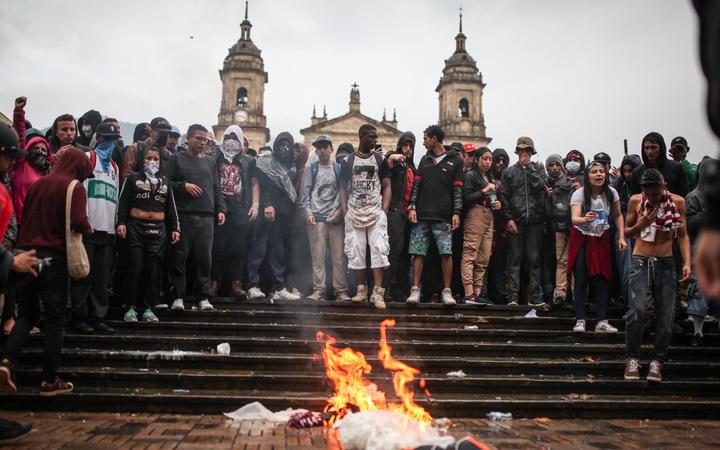 There are reports of vandalism and looting as unrest continues in Colombia. Photo: AFP

Late on Friday, three police officers were killed in a bomb attack in the country's south-west.

It is not clear if the incident is connected to the protests. The area is notorious for drug trafficking and gang violence.

Colombians have taken to the streets over possible changes to the minimum wage, pension and tax reforms, and the privatisation of state companies. The government insists there are no planned pension or labour reforms and that any changes would take place in consultation with labour groups. 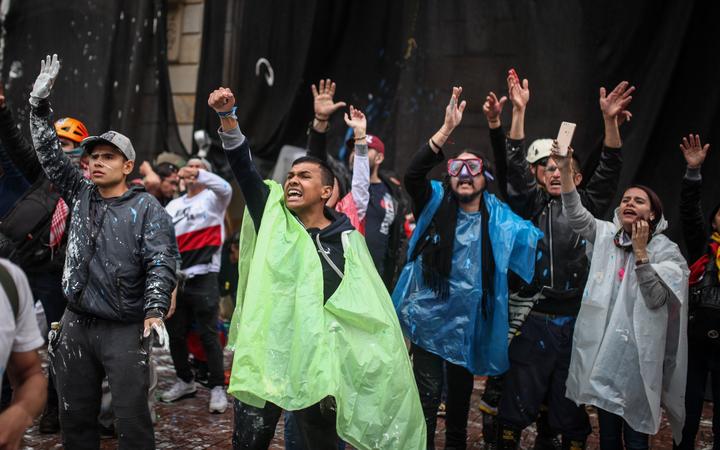 The government is trying to ease worries about possible changes to the minimum wage, pension and tax reforms, and the privatisation of state companies. Photo: AFP

Protesters are also angry about alleged corruption and what some see as the government's failure to honour a 2016 peace deal with left-wing Farc rebels amid a rise in violence.

A general strike on Thursday was called by unions and student groups, and more protests were held on Friday, with police using tear gas to disperse crowds.

President Duque said he had heard Colombians and vowed to deepen "social dialogue".

Unrest in Colombia has coincided with a surge of anti-government demonstrations elsewhere in Latin America.

Protesters have taken to the streets in several Latin American countries in recent months, including in Chile, where conservative President Sebastián Piñera is grappling with the country's biggest crisis since its return to democracy in 1990.

In Bolivia, claims of election fraud led to the resignation of long-time leftist President Evo Morales amid nationwide protests. Demonstrations have also taken place in Ecuador and Nicaragua.