At least 60 passengers died when a train travelling from the Pakistani city of Karachi to Rawalpindi caught fire, police say. 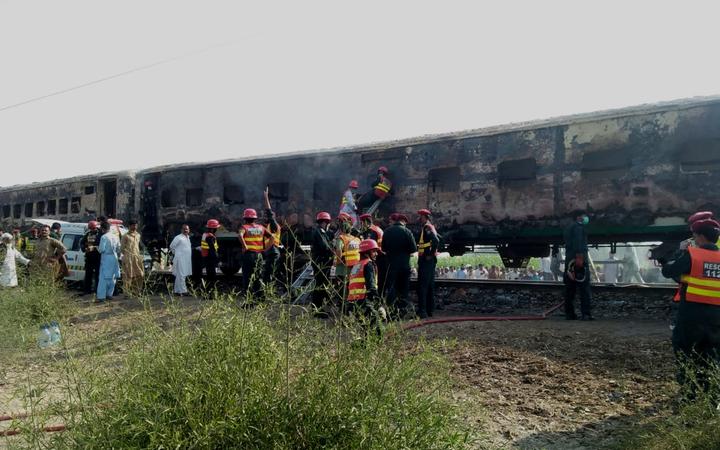 Pakistani rescuers shifting victims from a train after a fire erupted on board in southern Punjab province on 31 October, 2019. Photo: Muhammad Bilal / Anadolu Agency

Minister for railways, Sheikh Rashid Ahmed, said the fire was caused by the explosion of a gas cylinder being used by passengers cooking breakfast.

The blaze is thought to have spread to at least three carriages.

According to officials cited in local media, many of the victims died as they tried to jump off the burning train.

Another 30 people have reportedly been injured and officials say the number of dead may still rise.

"Two cooking stoves blew up. They were cooking, they had (cooking) oil which added fuel to fire," Sheikh Rashid Ahmed, minister for railways, said.

Passengers bringing stoves onto trains in order to cook meals on long journeys is a common problem, the minister said.

He added that many passengers were heading to a conference organised by the Tablighi Jamaat Sunni Muslim missionary movement.

The accident happened near the town of Rahim Yar Khan in the south of the Punjab province.

The train running from Karachi, across most of Pakistan to Rawalpindi, is the Tezgam - one of Pakistan's oldest and most popular train services. 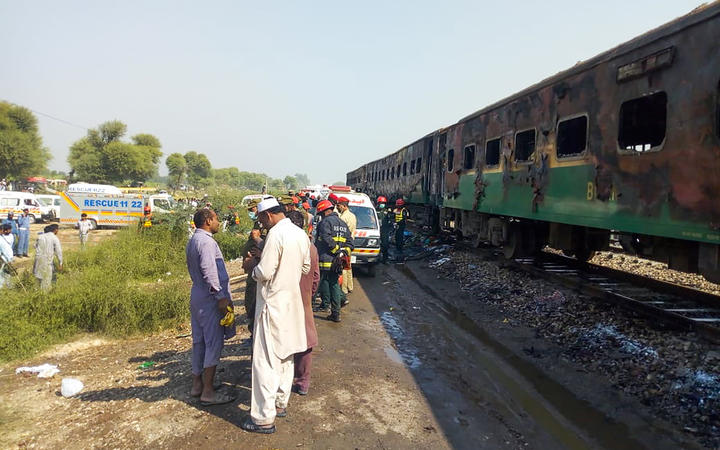 Rescue workers gather beside the burnt-out train carriages after a passenger train caught on fire near Rahim Yar Khan in Punjab province on 31 October, 2019. Photo: AFP

Pakistan has a history of railway accidents with multiple deaths. Casualty figures are often so high because trains are packed with far greater numbers than they were designed for.

In July, 11 people died in an accident, with four dying in another accident in September.

And in 2005, more than 130 people were killed when three trains collided in Sindh province in one of the country's worst train disasters.