Thousands of Los Angeles residents have been told to evacuate because of a fast-moving wildfire that began in the early hours of Monday morning. 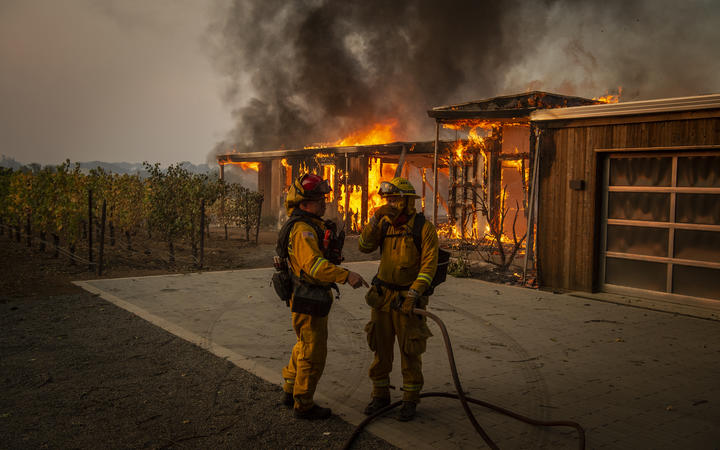 Firefighters discuss how to approach the scene as a home burns near grape vines during the Kincade fire in Healdsburg, California. Photo: AFP

The Getty Fire started near the Getty Center arts complex and spread to about 500 acres (202 ha), close to some of the city's most expensive homes.

California's governor has declared a state-wide emergency as wildfires continue to rage in many other areas.

NBA star Lebron James was among those forced to flee the LA fire.

LA Mayor Eric Garcetti announced he would sign an emergency declaration to draw more resources to fight the Getty fire.

How many people are being evacuated?

Some 3,300 homes are in the mandatory evacuation zone.

The wildfire is threatening LA's affluent Brentwood neighbourhood, and a local resident told the LA Times he was debating whether or not to leave, and which car of his two cars should be left behind.

"I have to figure out what I'm going to do with my Ferrari," the 47-year-old man said. 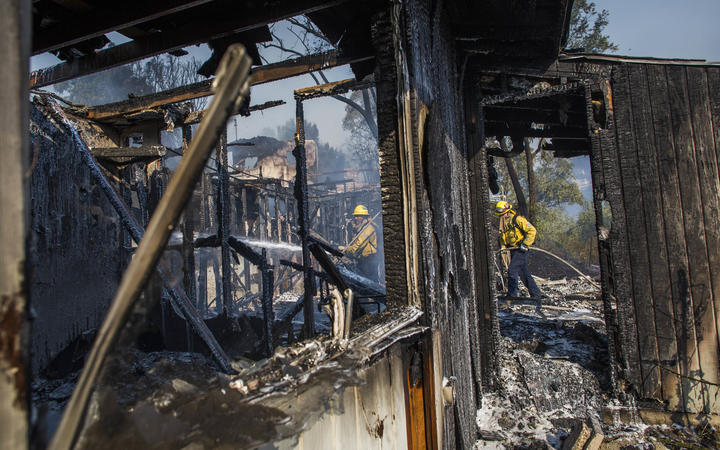 Meanwhile, wildfires are continuing to sweep through northern California.

Some 180,000 people have been ordered to leave homes, with roads around Santa Rosa north of San Francisco packed with cars as people tried to flee.

All schools in Sonoma County were closed for Monday and Tuesday as tens of thousands of homes remain under threat.

The biggest blackouts in the state's history have already left a million people without electricity. Power companies are trying to stop damaged cables from triggering new fires.

Another million people have been told they could lose supplies.

The main evacuation order in the north encompasses a huge area of Sonoma County, including Santa Rosa.

Sonoma has been ravaged by the Kincade Fire, which started on Wednesday and has burned through 50,000 acres of land, fanned by high winds.

The 150-year-old Soda Rock Winery was among the structures destroyed.

There are fears the blazes could cross the 101 highway and enter areas that have not seen wildfires since the 1940s.

Some 43 of California's 58 counties are under "red flag" warnings. The warning informs firefighting services that conditions are ideal for wildfires.

Why is the power being switched off?

Fears about the extent of the wildfires led Pacific Gas & Electric (PG&E) to initiate a precautionary blackout.

Power was shut off to 940,000 customers in northern California over the weekend.

PG&E said it would work to restore services on Monday but warned of further power cuts as soon as Tuesday if the forecast strong winds returned.

The warnings came as the company faced scrutiny over its possible role in the fires.

The Kincade Fire began seven minutes after a nearby power line was damaged, but PG&E has not yet confirmed if the power glitch started the blaze.