A Dutch foundation devoted to fighting plastic pollution in the world's oceans has unveiled a new device designed to stop it from reaching the sea - by collecting and cleaning plastic waste from major rivers. 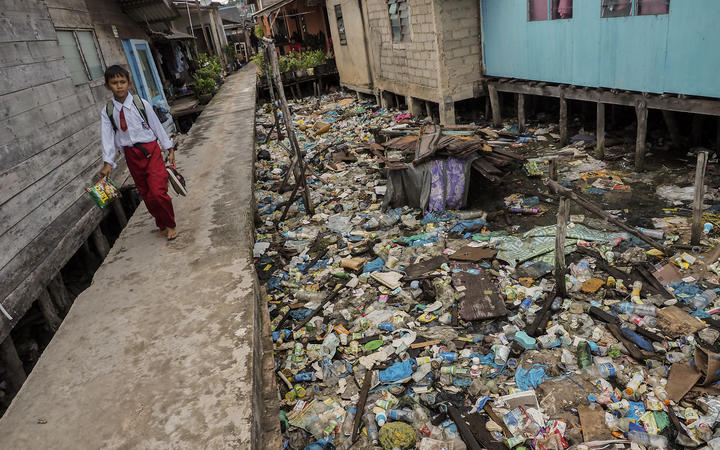 Household garbage disposed of into the sea at low tide accumulates under the houses of residents in the Riau island of Batam, Indonesia. Photo: AFP

The Ocean Cleanup Foundation, a non-governmental organisation best known for its attempts to collect and clean plastic from the Great Pacific Garbage Patch, said it has been testing a system based on similar principles - a floating barrier to collect plastic passively - for use in rivers.

"To solve the plastic pollution problem we need to do two things: we need to clean up what's already in the oceans, for that we of course have the Ocean Cleanup System," founder Boyan Slat, 25, told Reuters.

"Now we also hope to tackle the other side of the equation: preventing more plastic from reaching the ocean in the first place."

The foundation's ocean system uses a large floating boom to collect rubbish. After initial setbacks and adjustments to the system, Ocean Cleanup reported earlier this month that it managed to pick up plastic from the high seas for the first time.

The river version, called the Interceptor, consists of a vessel that is anchored to a riverbed while floating arms - which leave space for animals and river traffic to pass, organisers say - divert waste into its collection system.

The system has already been tested on rivers in Jakarta, Indonesia and in Klang, Malaysia, the organisation said today. Two more are planned for Can Tho in Vietnam's Mekong Delta, and Santo Domingo in the Dominican Republic. Ocean Cleanup said it was still testing the river system and would not give out numbers on plastics collected until a rollout phase had been completed.

According to the group each device is capable of extracting thousands of kilograms of detritus per day.

Mr Slat said one percent of rivers were responsible for 80 percent of the pollution in the world's seas. That makes finding a solution to the problem of plastic pollution emanating from rivers "quite achievable", Mr Slat said.