Indonesia's Papua province has become the focus of a well-funded social media campaign using bots to promote a pro-government agenda, the BBC has found. 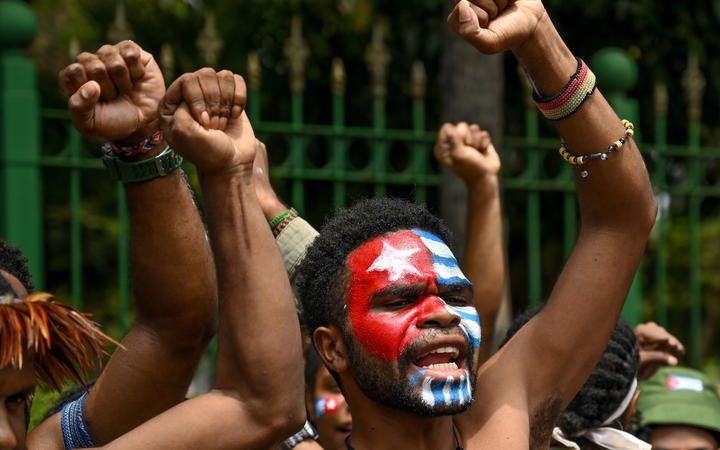 But with access to the region heavily restricted, social media has become a key source for the foreign press.

One expert told the BBC the apparently co-ordinated campaigns were seeking to skew international views of Papua.

The investigation, by the BBC and the Australian Strategic Policy Institute (ASPI), identified a network of easily recognisable "bots" - or automated accounts - which were sharing the same pro-government content about Papua at the same time.

The Twitter accounts were all using fake or stolen profile photos, including images of K-pop stars or random people, and were clearly not functioning as "real" people do on social media.

This led to the discovery of a network of automated fake accounts spread across at least four social media platforms and numerous websites which could be traced to a Jakarta-based media company, InsightID.

The bots would jump on to hashtags being used by groups supporting independence, such as #freewestpapua, so they swamped negative reporting with positive stories about investment in the region, a process known as "hashtag hijacking".

This technique was also used on Facebook. One such message, in English, said Indonesia had invited the UN to Papua to assess the situation. But the UN has complained that, despite an agreement more than a year ago, an official visit has still to take place.

The company pushed out content on Facebook with paid ads targeting users in the US, UK and Europe.

"The risk of a campaign like this, in a place with so little access to truly independent media, is it skews the perceptions and understanding of the international community in a way that doesn't reflect reality," says ASPI cyber researcher Elise Thomas.

"That appears to be the goal, one which someone is willing to spend hundreds of dollars and many months to achieve."

I captured five days of tweets using #WestPapua & #FreeWestPapua tags after a crackdown by Indonesian forces against Papuans in Aug. What I found was a bot network spreading pro-govt propaganda.

Many of the Twitter bots identified in the joint investigation have been removed. But more have been created to replace them.

In line with the findings of this investigation, Facebook recently shut down more than 100 of these accounts, saying they didn't want their services "used to manipulate people".

Facebook also said it had found links to InsightID. About $300,000 (£245,000) had been spent by the removed accounts on advertising on the site, although not all of them were attributed to InsightID.

InsightID could not be contacted. But a statement posted on social media credited to the firm said: "Our content defends Indonesia against the hoax narrative of the Free Papua separatist groups."

Indonesia has seen a significant rise in fake news and hoaxes in recent years. With both side of politics accused of using bots.

Although the manipulative social media campaign was supporting the Jakarta narrative on Papua, the government told the BBC it supported the move to shut the fake accounts down.

"Manipulating facts in order to discredit certain groups is very dangerous and can create social unrest," said Ferdinandus Setu, the spokesperson for the Ministry of Communication.

The investigations also uncovered a separate but overlapping campaign that Ms Thomas said was "a network of accounts and websites that has been built to promote 'news' stories which are either slanted to reflect a pro-Jakarta narrative or are simply false".

For example the bots shared a photo of UN human rights' chief Michelle Bachelet, with a comment saying the UN had responded "positively" to the way Indonesia has dealt with the uprising in Papua.

Ms Bachelet in fact said she was "disturbed" by the violence and called for the government to "restore internet services and refrain from any excessive use of force".

The stories the accounts were sharing came from English language site Wawawa Journal. It looks like a legitimate news site, but its articles rely on unnamed sources, and vilify the international media's coverage of the unrest in Papua.

The domain holder for this and a similar site, is Muhamad Rosyid Jazuli, the CEO of the Jenggala Institute, a research centre founded by Indonesia's former Vice-President Jusuf Kalla.

Mr Jazuli told the BBC the campaign was a personal project that he was independently funding, in response to what he claimed was biased reporting of events in Papua.

"The international media are only getting information from a few people, that's not fair, there must be a counterweight. This is an effort to enrich the discourse," he said.

Indonesia's Ministry of Communication told the BBC it would investigate the sites identified by this investigation and if found to be spreading "fake news" or provocative content they would be taken down.

She told the BBC: "Rape and death threats are now part of my daily life."

Now based in Australia, she has been a major source on social media of photos and footage of protests and unrest, sharing information passed to her by contacts in Papua.

Ms Koman now stands accused by the government of spreading "false news" and "provoking unrest" by publishing reports about the racist attacks on Papua students in Java.

She faces charges under the controversial Electronic Information and Transactions law (ITE) that makes it illegal to spread "fake news". If found guilty she could be jailed for six years.

Press and rights groups say this law suppresses free speech and is open to misuse.

"It's an information war that has been raging for decades," Ms Koman said.

"We are fighting machines, the only thing individuals like me can do is remain hopeful that the truth will be stronger than any kind of propaganda."