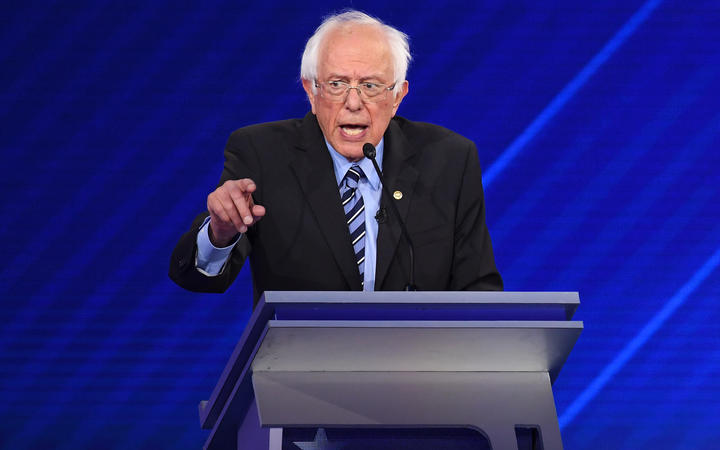 Mr Sanders was treated in hospital for an arterial blockage after experiencing chest pain at an event in Nevada on Tuesday.

An adviser for the Vermont senator said he was in "good spirits" and will be resting over the next few days.

Mr Sanders had earlier announced his campaign has raised over $25m (£20m).

Senior adviser Jeff Weaver said in a statement: "Following medical evaluation and testing he was found to have a blockage in one artery and two stents were successfully inserted."

Mr Weaver said Mr Sanders is "conversing and in good spirits" and will be "resting up over the next few days".

A stent is a small mesh tube used to help keep arteries open. Receiving stents is "a minimally invasive procedure", typically with a short recovery time, the US National Heart, Lung and Blood Institute says.

It is unclear how long Mr Sanders will need to recover from his surgery, and whether it will affect his appearance in the next Democratic debate on 15 October.

His $25.3m haul from July through September was the largest of any Democratic candidate in a quarter so far.

If Mr Sanders were to win the presidency, he would become the oldest person in the US to hold the office.

Mr Sanders had been in Las Vegas to participate in a gun safety forum on Wednesday, along with some other 2020 candidates.

Many of his presidential rivals wished him a "speedy recovery".

Mr Sanders on Tuesday announced a $1.3m television advertising purchase in Iowa, but US media report that on Wednesday, his campaign began cancelling the ads. It is unclear why. Iowa hosts the first voting contest in the US presidential race.

The senator's health made headlines last month as well, when he cancelled three events in South Carolina after losing his voice, taking two days to recover.