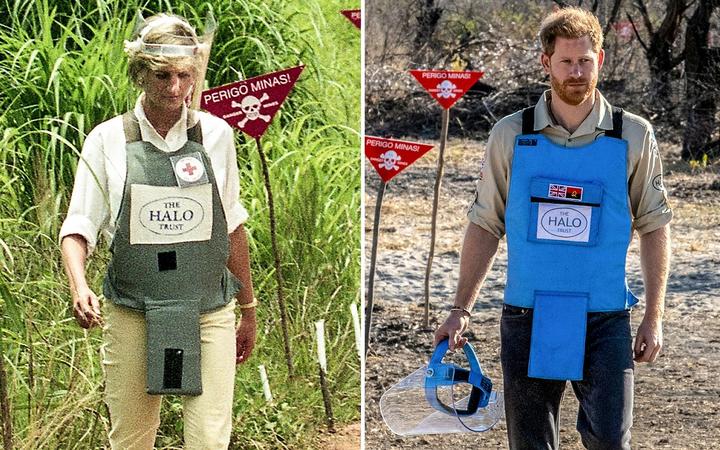 Princess Diana visited a minefield in Angola in January 1997 and her son, Prince Harry, has made a similar visit during his current tour of Africa. Photo: AFP / Halo Trust

Prince Harry visited the site in Huambo, which has become a "bustling community" since Diana's campaign.

Wearing body armour, he also visited a partially-cleared minefield nearby and set off a controlled explosion.

Diana captured global attention when she walked through the live minefield in 1997.

She never lived to see the full impact of her visit - such as the signing of an international treaty to outlaw the weapons - as she died later that year.

Retracing his mother's footsteps in central Angola, Prince Harry is being escorted by the British landmine clearance charity, the Halo Trust, which also accompanied Diana on her visit.

After walking along the suburban street, which was once filled with the explosives, the duke said it was "quite emotional" to retrace Diana's steps "and to see the transformation that has taken place, from an unsafe and desolate place into a vibrant community of local businesses and colleges".

He added: "Without question if she hadn't campaigned the way that she did, this arguably could still be a minefield.

"I'm incredibly proud of what she's been able to do, and meet these kids here who were born on this street."

The area has become a "completely different place" since demining and now is a "bustling community" with houses and schools and shops, added Camille Wallen, director of strategy at the Halo Trust. 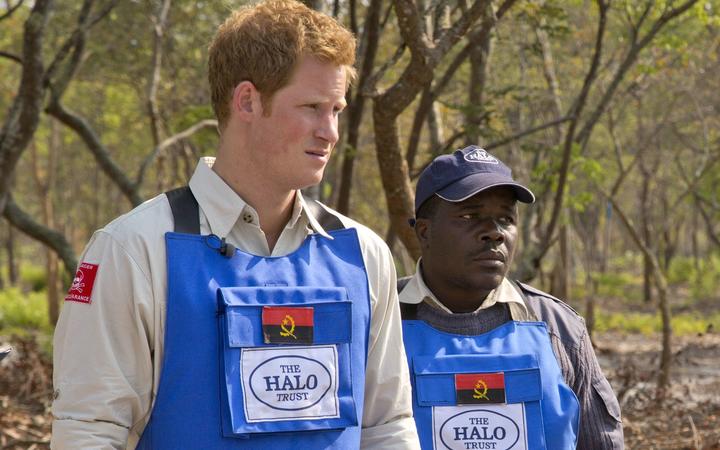 Earlier, Prince Harry visited a minefield near the south-eastern town of Dirico, which is in the process of being cleared.

The site was mined by anti-government forces in 2000 when they retreated from their base.

In 2005, a 13-year-old girl lost a foot after stepping on one of the explosive devices in the area.

Halo Trust staff have been working to make the minefield safe since August and hope to clear it by the end of October.

Prince Harry was given a safety briefing and told not to stray off the cleared lanes, not to touch anything or run. 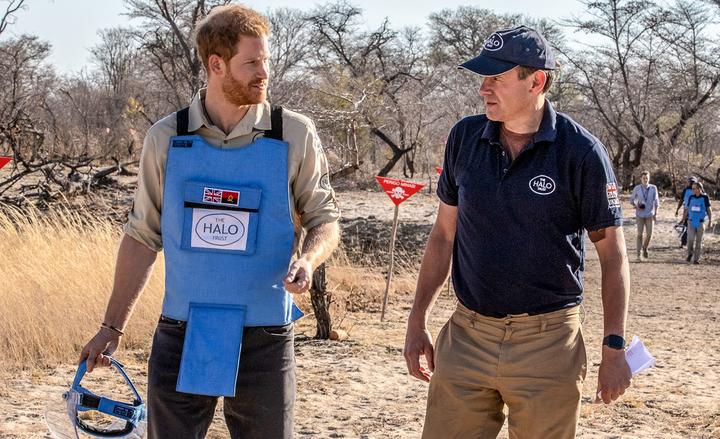 In a speech, the duke said the Halo Trust was helping the community "find peace".

"Landmines are an unhealed scar of war. By clearing the landmines we can help this community find peace, and with peace comes opportunity," he said.

"Additionally, we can protect the diverse and unique wildlife that relies on the beautiful Kuito river that I slept beside last night."

Why Harry is following Diana's lead on landmines

The prince called for an international effort to clear landmines from the Okavango watershed in the Angolan highlands, where the weapons remain 17 years after the end of a civil war.

The conflict - between 1975 and 2002 - has left Angola one of the most mined places in the world, with around 1200 minefields, according to the Halo Trust.

The organisation says it has decommissioned almost 100,000 mines since 1994 but it is impossible to know exactly how many remain.

There are two main types of mine: anti-personnel landmines, aimed at killing or injuring people, and anti-tank mines, designed to destroy vehicles.

The random placement of the explosive devices became part of military strategy in the 1960s.

Around 50 years later, about 60 countries and territories are still contaminated with anti-personnel mines.

More than 120,000 people were killed or injured by landmines between 1999-2017, according to research by Landmine Monitor.

Civilians made up 87 percent of casualties, while nearly half of the victims were children.

"As we saw in 1997, Princess Diana really helped raise awareness of the issue of landmines and the plight that people who live with landmines have every day," she told BBC Breakfast.

"It effectively transformed what we do, and it transformed it for those people. They really felt they were being heard."

Princess Diana's involvement in the cause involved a call for a global ban on landmines.

Three months after her death in 1997, 122 countries signed the Ottawa Treaty, which prohibits the use, production, stockpiling and transfer of anti-personnel mines. 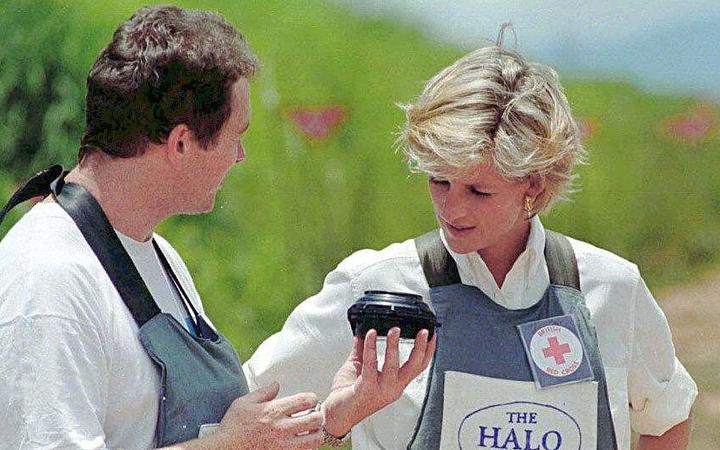 Princess Diana is shown a mine near Huambo during her visit in 1997. Photo: AFP / Halo Trust

Ms Wallen said Prince Harry's visit helped "remind the world that landmines are not just a thing of the past".

"Decades after conflict they continue to threaten people's lives," she added.

Angolan minister Lucio Goncalves Amaral said Diana's anti-mine campaign left a "humanistic heritage" that motivated the country's authorities to push to remove all the devices from the country by 2025.

"We will never forget her priceless contribution to the campaign to ban the anti-personnel landmines," Angola's deputy minister for social integration said in a speech.

"The Angolan people will be eternally grateful for her performance in the demining process of our territory."