There's a new political controversy in the US - involving Donald Trump, foreign nationals, questions about legal and ethical behaviour, and allegations against a political rival. 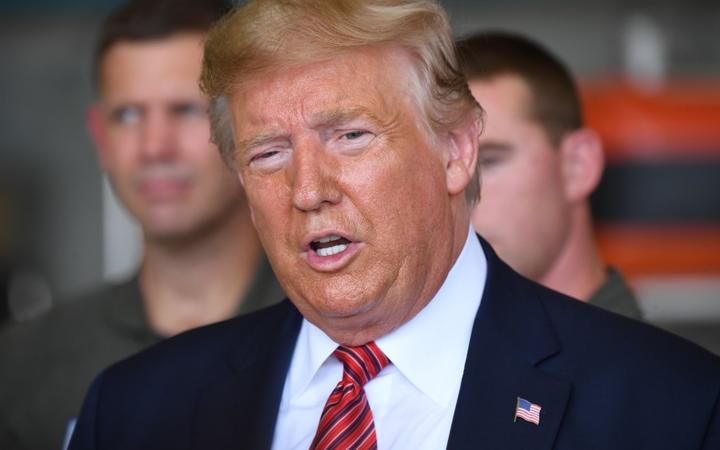 This feels a bit like déjà vu from 2016, with Russia, then-candidate Trump and Hillary Clinton, but it's a new country (Ukraine) and a new cast of characters (Joe Biden and his son Hunter).

Mr Trump is still right smack in the middle, of course.

The story can be difficult to follow, so here are some answers to the most pressing questions.

Why is this important?

Mr Trump's most ardent critics accuse him of using the powers of the presidency to bully Ukraine into digging up damaging information on a political rival, Democrat Joe Biden.

Meanwhile, Mr Trump and his supporters allege the former vice-president abused his power to pressure Ukraine to back away from a criminal investigation that could implicate his son, Hunter.

Mr Biden is the front-runner for the Democratic nomination to take on Mr Trump next year.

In other words, it is nothing less than the White House at stake.

Where does this row stem from?

According to multiple media reports, Mr Trump and Ukraine President Volodymyr Zelenski had a phone conversation on 25 July this year.

The US president is alleged to have pressed his Ukrainian counterpart to investigate former Vice-President Biden.

Mr Trump may have also discussed the $250m (£201m) in military aid Congress approved for Ukraine - that the Trump administration had delayed releasing until mid-September.

Has Mr Trump confirmed any of this?

Mr Trump said that he spoke to Mr Zelensky about the problem of corruption and also about Mr Biden and son Hunter among other issues.

It was a "nice conversation" on the phone - a "perfect" call.

The US gives aid to Ukraine so "we want to make sure that country is honest," he added.

On Twitter, Mr Trump has been more blunt, saying the controversy was created by Democrats and the "Crooked Media".

He has also tacitly questioned the "supposed" whistleblower's patriotism.

What are other US politicians saying?

Congressional Democrats say the phone call - raised by a whistleblower in a formal complaint - is important because it helps to shed light on the president's dealings with the foreign leader.

Critics of the White House say that Mr Trump put pressure on Mr Zelensky, urging him to tell officials in his government to investigate business activities related to Hunter Biden, who was a board member for a company owned by a Ukrainian oligarch.

Democrats said that the president wanted the Ukrainians to start the investigation into corruption because this could sully the reputation of Hunter and his father.

Republicans have said little about the controversy. This shows the partisan nature of the controversy, which has - like much else in Washington - been divided by party politics.

However, at least one Republican, Mitt Romney, a US senator from Utah, said he would like to know more.

What happened to the whistleblower's complaint?

Instead, Mr Maguire spoke to a lawyer who told him the issue was not "urgent", at least according to legal standards, according to the New York Times.

As a result, Mr Maguire decided that the members of the congressional oversight committees did not need to see it.

On 9 September, the inspector general informed Congress about the complaint's existence, but not the details. Democrats in Congress have since clamoured for more information - including a transcript of Mr Trump's call - but the administration has refused to co-operate.

And that's where things currently stand.

So did the president do something illegal?

The most damning allegation is that the president pressured a foreign leader for damaging information about a political opponent while holding out the prospect of US military aid.

Is that illegal? We do have some very recent precedent.

The special counsel's report detailed multiple contacts between the campaign and Russian nationals, including the June 2016 meeting between top campaign officials such as Donald Trump Jr and several Russians with ties to the Kremlin.

There has been some debate over whether soliciting opposition research from a foreign government constitutes a campaign finance violation, but Mr Mueller declined to file charges.

Mr Trump's Ukrainian call could also potentially run afoul of federal bribery statutes. The special counsel concluded that Justice Department policy guidelines prohibit a sitting president from being indicted, however, so even if Mr Trump did commit some kind of crime with his actions, he's safe at the moment from criminal prosecution.

With this in mind, a more relevant question might be …

The constitutional process for handling a president who committed illegal and-or unethical acts is impeachment by a majority of the House of Representatives and conviction and removal by a two-thirds majority of the US Senate.

The US constitution outlines the grounds for impeachment as "treason, bribery, or other high crimes and misdemeanors". When it comes down to it, an "impeachable offense" is whatever a majority of the House says it is.

Ever since the conclusion of the Mueller investigation, the drumbeat for impeachment among Democrats - who hold a comfortable majority in the House - has been steadily increasing. Up to now, however, the House Democratic leadership has been loathe to push ahead with a formal investigation that could lead to an impeachment vote.

Speaker of the House Nancy Pelosi has suggested that such a move could damage the electoral prospects of Democrats in moderate congressional districts and would in the end be meaningless because the Republicans who hold the majority in the Senate would never vote to remove the president.

With the latest Ukraine allegations, however, some Democrats have started to speak in a more assertive manner about their desire to impeach the president. "The president is pushing us down this road," said Mr Schiff on CNN.

At some point the calculus in the House could change and Democrats who are saying there is a moral responsibility to impeach the president could gain the upper hand.

Is there anything to these allegations about Joe Biden and his son?

The allegations against the Bidens pushed by Mr Trump and his lawyer, former New York City Mayor Rudy Giuliani, centre on the then-vice-president's successful effort to force out top Ukrainian prosecutor Viktor Shokin in 2016.

Mr Shokin's office was responsible for investigations into a Ukrainian gas company, Burisima Holdings, which at the time was paying Hunter Biden, Mr Biden's son, as much as $50,000 a month to serve on its board of directors.

Mr Trump, Mr Guiliani and others allege that the vice-president's pressure, which included the threat to withhold $1bn in US loan guarantees to the country, was an effort to protect his son and his company from potentially criminal exposure.

At the very least, according to critics, the Biden family's ties to Ukraine raise the perception of a possible conflict of interest.

Cutting against these allegations is the fact that Mr Biden was not the only public official - in the US, among EU countries and in Ukraine - calling for Mr Shokin's removal.

And as the New York Times recently noted, the Ukrainian prosecutor was not "aggressively pursuing" investigations into Burisima at the time, but was accused of using the threat of prosecution to solicit bribes from company leaders.

As noted, the parallels between this Ukraine episode and events surrounding 2016 Russian election-meddling story are unmistakable. There are, however, key differences.

Back in 2016, Mr Trump was a private citizen aspiring to the White House. His campaign may have been approached by foreign nationals offering assistance, but according to the Mueller investigation, the overtures either led to nothing or were rebuffed outright.

Now Mr Trump - with all the powers of the presidency at his disposal - is alleged to have initiated the contact with a foreign leader. While he denies pressuring the Ukrainian president, his critics say blocking military aid while repeatedly asking for an investigation into the Bidens makes Mr Trump's objective crystal clear.